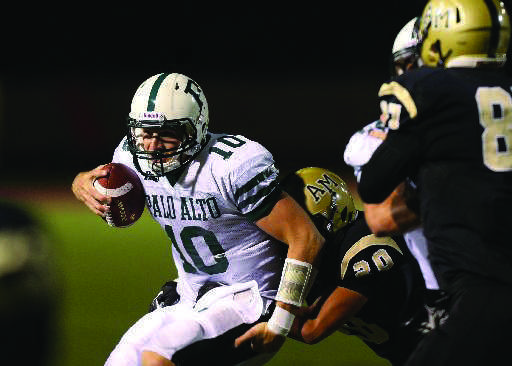 Senior Keller Chryst scrambles to avoid a tackle against an Archbishop Mitty defender in a 34-14 loss on Sept. 21.

The Palo Alto Vikings football team looks to restrategize and improve their season after losing to both Archbishop Mitty and Palma High School. After a commanding 28-7 victory over San Benito High School on opening night for the newly constructed Viking Stadium, the team gained confidence for their upcoming games, but were unable to pull through in the next two games.

The Vikings (2-2) lost to Archbishop Mitty on Sept. 21 by a score of 34-14 for their first loss of the season. Mitty dominated the entire game and held the lead the whole way. Although the team continued the next week with another loss to Palma High School in Salinas, head coach Earl Hansen saw the 23-20 loss as an important stepping stone in the season.

“At Palma we got better as a team as the game progressed,” Hansen said. “It was definitely obvious that we’re getting stronger.”

Palma scored 10 points in the first quarter and took a 17-6 lead into halftime. Paly battled back in the second half scoring 14 points, but could not pull off the comeback, giving Palma its first victory.

On Oct. 4, Paly rebounded  with a dominant 41 – 14 victory over Fremont High School. From the beginning, Paly overpowered the Fremont defense.

“We’ve [had a slow start] because we have eight sophomores on this team [but] they’re going to be real good [players],” Hansen said. “But we’re picking up the pace now and we’re ready to go.”

The team has many returning players, including seniors who hope to have a successful season, and increase their chances of college recruitment. One such senior is Stanford-bound quarterback Keller Chryst.

“Keller’s a pretty good prospect,” Hansen said. “We have [senior wide receivers] Keesean [Johnson] and Malcolm [Davis]… those guys are all good prospects.”

While nursing an injury on the sidelines, senior Christo Proceviat has noticed several other seniors who have stepped up this season to lead the team. He believes the progress the seniors have made is promising.

“Tully [McCallister], Andrew Frick, Connor Scheel, Justin Rittman and Jack Anderson are all really good, but the team as a whole is getting better and better with practice” Proceviat said.

The Vikings challenge De Anza Division league rival Wilcox High School tonight. For Paly, this is the team’s first home game in over a month. Hansen feels that the team is well prepared for their matchup with Wilcox this week and looks forward to a great game.

“We’re feeling pretty good right now,” Hansen said. “[Wilcox has] a specific type of offense that we’ve been practicing against and we’re doing what we have to do pretty well. Overall I think that during each game we’re getting better.”