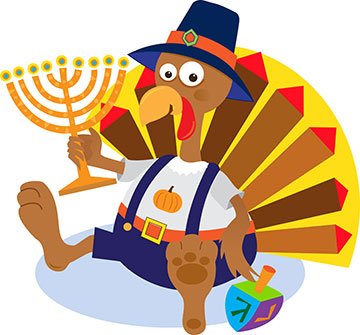 What happens when you mix the festival of lights with the festival of thanks? You get Thanksgivukkah. On Nov. 28, for the first time since the holiday’s establishment as a national holiday in 1863 and since it was mandated to occur on the fourth Thursday of November in 1936, Thanksgiving will coincide with the Jewish holiday Hanukkah. As Jews across the nation stuff themselves with turkey and mashed potatoes, they will further culminate their meals by lighting three candles in honor of the second night of Hanukkah.

Not for another 70-plus millennia will Thanksgiving fall in the middle of Hanukkah. So is the hype surrounding this hybrid holiday deserved or just another instance of American pop culture and consumerism? Let’s delve in.

In 165 BCE, Judah Maccabee and his brothers led the Jews to victory in a revolt against the religiously oppressive Assyrians, lead by King Antiochus. This classic Jewish underdog story was considered a miracle, but not only because of the Assyrian defeat. Legend has it that after the Jews reclaimed the Temple in Jeru- salem, they lit a candle that had only enough oil for one day, but the candle ended up burning eight nights. It is for this reason that Jews celebrate Hanukkah by lighting one candle a night for a course of eight days, in addition to one “helper” candle each night that is used to light the others.

A couple thousand years later, in 1621, English Puritans seek- ing religious freedom — known colloquially as Pilgrims — arrived in the New World at Plymouth Rock after voyaging across the Atlantic Ocean on the famed Mayflower ship. To celebrated their arrival and newly found freedom, the Pilgrims had a harvest feast with the local Wampanoag Indians. This feast became a symbol of coexistence and although the fall harvest was nothing new for Native Americans, it became a staple holiday that was officially designated as a national holiday by President Abraham Lincoln in 1863.

Hanukkah usually falls in early to mid-December and has long been associated with its Christian counterpart holiday during that month — Christmas. However, the similarities between Hanukkah and Thanksgiving are far more noticeable.
Both the Maccabees and Pilgrims fought against religious per- secution and established themselves as dominant leaders in their newfound roles.

“Thanksgiving is the time in American culture [when] it’s safe to express how you feel,” says Rabbi Laurie Matzkin, Director of Lifelong Learning at Congregation Kol Emeth in Palo Alto. “It’s sort of ‘kosher.’ I think that’s a Jewish value. I think Jewish homes… are supposed to be emulating that value always.”

But as in most tales, fraud often follows in power’s footsteps.

“There’s a sense of purity in [the Maccabees’] mission, but later on, they become corrupt and totally corrupt kings,” Matzkin said. “What happens is they centralize power… and it was very nepotistic. How do we celebrate the courage of these early folks who paved new paths and did take a lot of risks and risked their lives… in sort of both cases fighting against establishment governments.”

In a similar manner, the Pilgrims’ success in the New World lead to destruction, as their historical injustices against Native Americans become more and more documented. Although invol- untary acts of destruction, such as the spread of disease, could not be prevented, massacring of Native American tribes and forced seizure of land are only a couple of examples of how Pilgrims abused their freedom.

As Matzkin notes, “rebellious energy eventually becomes institutionalized itself and gets corrupt.”

“The ‘December dilemma’ has moved to the ‘November dilemma,’” Matzkin points out. “Why can’t Hanukkah be a stand-alone holiday? Why does it always have to be assimilated into the context of a greater American holiday?”
American consumerism has infiltrated Hanukkah, a holiday that in its purity has little to do with giving presents, largely due to the fact that it often falls within a week or two of Christmas. The question that is being posed this holiday season is whether Hanukkah pop culture will be affected by its shift toward Thanksgivukkah. Matzkin hypothesizes that consumerism might be something “the secular Jew- ish population [is] looking to grab onto.”

A notable shift that will happen as a result of Thanksgivukkah will be new cuisine, as standard Hanukkah fare will be fused with tradi- tional Thanksgiving food. Sweet potato latkes, cranberry applesauce, challah-apple staffing and rye pumpkin pie are just a few of the recipes that have been recently concocted in honor of the (literally) once-in- a-lifetime holiday.