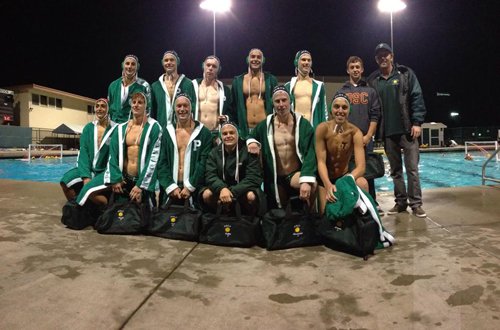 The girls’ water polo team joins in a huddle to prepare for its game. The team finished its league season 4-8 and hopes to continue on to CCS.

The victory against Monta Vista High School was bittersweet as it was the last home game of the year.

“It was really fun to play with such a great team,” senior captain Ethan Look said. “I think I speak for all the seniors when I say we are playing with our best friends, and there is nothing better than that.”

“The game was a huge success, not only because we won, but [also due to] the big fan turnout and support,” junior Maclean Mansfield said. “It was bittersweet knowing [the seniors aren’t] going to be back [next year], but I was happy for them.”

Every senior played on Senior Night, and senior captain Sam Kelley had a strong game, leading the team with three goals to contribute to the 14-7 win.
The team carried the positive momentum from the victory on Senior Night into its next game against Los Altos High School, which left the team with a 12-11 win and high hopes for the playoffs.

Even after another win against Los Altos High School, the team captains reinforced the idea that the team needs to continue to improve in order to make a strong push into the league and Central Coast Sectional (CCS) playoffs.

“It was a tough game,” Look said. “They came out strong and pumped up on their Senior Night, and we didn’t put the balls away that we needed to. We scrimmaged Saint Ignatius yesterday, and our defense was lights out. That’s the kind of game we need to play to win out this week at league championships and go deep into CCS following that. We are excited for what is to come.”

The team is in the middle of an impressive winning streak now and hopes to ride that momentum into both league and CCS playoffs.
“[We’ve won] six games in a row now,” Kelley said after the team’s win.

“If all goes well, we should meet [Gunn] in the SCVAL [Santa Clara Valley Athletic League] finals at Paly in two weeks,” Kelley said optimistically.
After losing to Gunn twice this season, Paly is looking forward to playing its rival and other teams, in the league playoffs.

“I have high expectations for our team in winning [league playoffs],” senior Omri Newman said. “I’m not underestimating the other teams and [I] know it will be hard to win.”

“We have leagues the week after next and then CCS will follow that,” Look said. “We have high hopes for both, looking to come back with lots of hardware.”