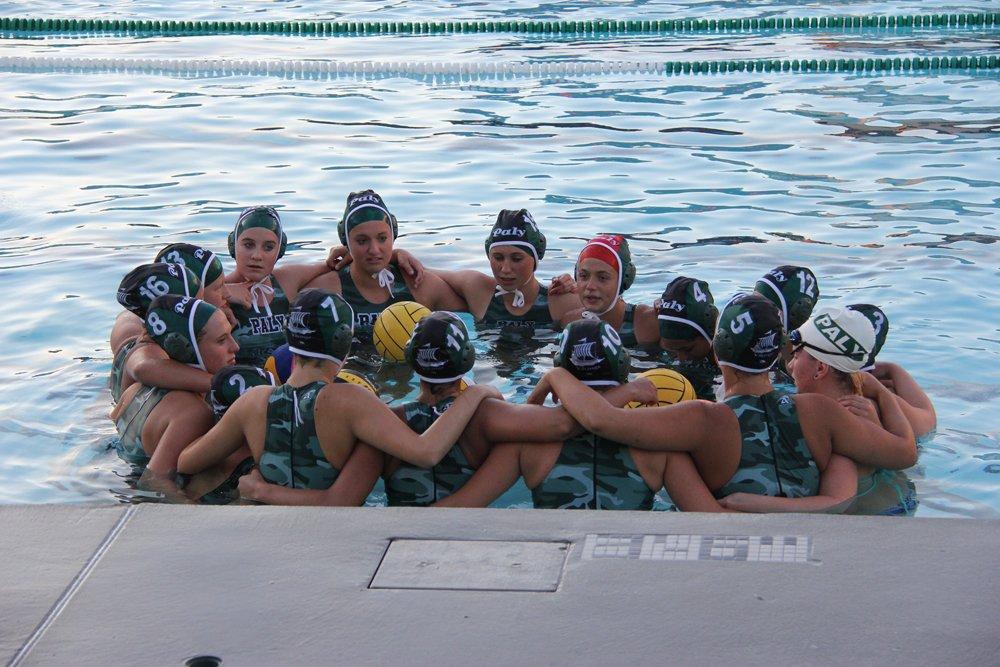 The girls’ water polo team joins in a huddle to prepare for its game. The team finished its league season 4-8 and hopes to continue on to CCS.

The Palo Alto High School girls’ water polo team has finished its league season on Oct. 31 with a record of 4-8, losing in the final regular season game to Los Altos High School 6-5.

It is unlikely that the team will participate in the Central Coast Section (CCS) tournament this year due to its record, but it is still possible if the team were to win a game on Nov. 7 in the league championship tournament. The Lady Vikes would have to defeat Los Altos High School, who had just beat them last Thursday in the qualifying game.

“Our first game on Thursday will determine whether we can go to CCS,” coach Aileen Delaney said. “If we win that, we will be able to play for top four in our league, and the top four teams qualify.”

The season has been difficult for the girls, given that the record is not what they wish it to be.

“The losses are very hard on us, but we’re still working hard,” senior captain Emma Wolfe said. “Our communication is much better. It really helps to see our ball work.”

Delaney has been well-liked as a coach on the team, and many of the girls are glad that the switch in coaches midway through the season did not negatively affect their play. Delaney brought the team up and proceeded to improve upon the team’s previous streak.

“Delaney has been a great coach and has taught all of the players on the team a lot about water polo in such a small amount of time with us due to the coaching switch,” junior Sheila Subramanian said.

The water polo team has stayed positive through all of its trials and hopes to come back better and stronger than ever in next year’s season. Although the team will lose a fair number of girls, it hopes to be competitive and have a great season next year.

“I think there’s a lot of potential here,” Delaney said. “They have improved throughout the time I’ve worked with them. I think they always compete hard in the games and it shows. We’ve had a positive season and I hope we can finish it off by making it to CCS.”

Though participation in CCS is doubtful for this year, the team is hopeful that next season will be better. The two captains, along with a few other teammates, will be graduating this year, but the majority of the team will stay for the following season. With stable leadership and strong players, the team hopes to outperform this year and years past.