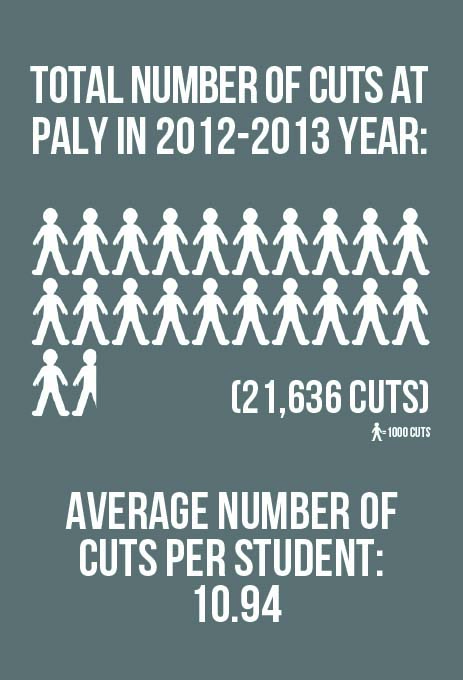 The administration has recently released several new guidelines to address the issue of Palo Alto High School students cutting class. Students cut for several reasons, but usually because they have an assignment that they aren’t quite ready for.

“There is Saturday School for any student who cuts four or more of the same class,” assistant principal Jerry Berkson said. “[Students] could lose their ability to get a drivers license until they’re 21 or they could be fined.”

However, the administration’s current guidelines don’t seem to be enough to persuade students not to cut. With one parent call, students can bypass all punishments.

“If parents are willing to back their children in letting them get out of test for reasons that aren’t legitimate than there’s not a lot teachers can do,” junior math teacher David Baker said. “[A teacher] could write a harder make up test, but then that is penalizing 70 percent or 80 percent of the absentees that were absent for legitimate reasons.”

Students and parents know this and take full advantage of it. Parents are willing to help because they want their children to receive good grades as well.

“My parents call me in because they feel like I can use my time well enough to do well in class and keep up,” junior Jane, whose name has been changed, said. “They want me to succeed, so they’re willing to call me in.”

“If we see them on campus, they still get a cut,” Berkson said.

Although these are the guidelines, according to campus supervisor Scott Reese, Paly’s attendance policy is lenient compared to other surrounding schools.

“In other school districts, if you don’t have that done, you literally can’t get out of class, their parent can’t go get them,” Reese said.

Despite this, some students consider taking these risks and falling behind in class is a small price to pay for a better grade. With other requirements such as sports, extracurricular activities and outside jobs, students feel they don’t have enough time to study for tests. Some feel that these time consuming extracurriculars justify taking the test later.

“It’s worth skipping one class period here and there to study for a test for another class if you are truly not prepared,  Jane said. “Tests are always worth the majority of your grade, so not doing well can have a significant impact on your grade.”

“[Teachers] don’t know that I had sports practice for three hours yesterday and I didn’t have enough time to study,” Gina, whose name has been changed, said. “I’m tired and I can’t just skip practice because that affects my college recruitment.”

Skipping one class testing period can provide up to an extra week to study, a serious advantage for students who would have otherwise been unable to.

But if skipping class provides such an advantage, why don’t all students do it? There are always more students who show up to class to take the test than those who cut to avoid it.

“It’s tempting to cut class, but my parents push me to get something from school more important than grades like being responsible and meeting deadlines” junior Jim, whose name has been changed to protect his identity, said. “If you take the test later you get an unfair advantage, but I want to be proud of my accomplishments.”

To keep things fair, teachers and administrators try to discourage students from cutting, however there is only so much they can do.

“Students aren’t learning to take responsibility for themselves in the way that we want them to,” Baker said. “[Students] have to remember that high school is about more than just academics, it’s about learning how to become responsible.”