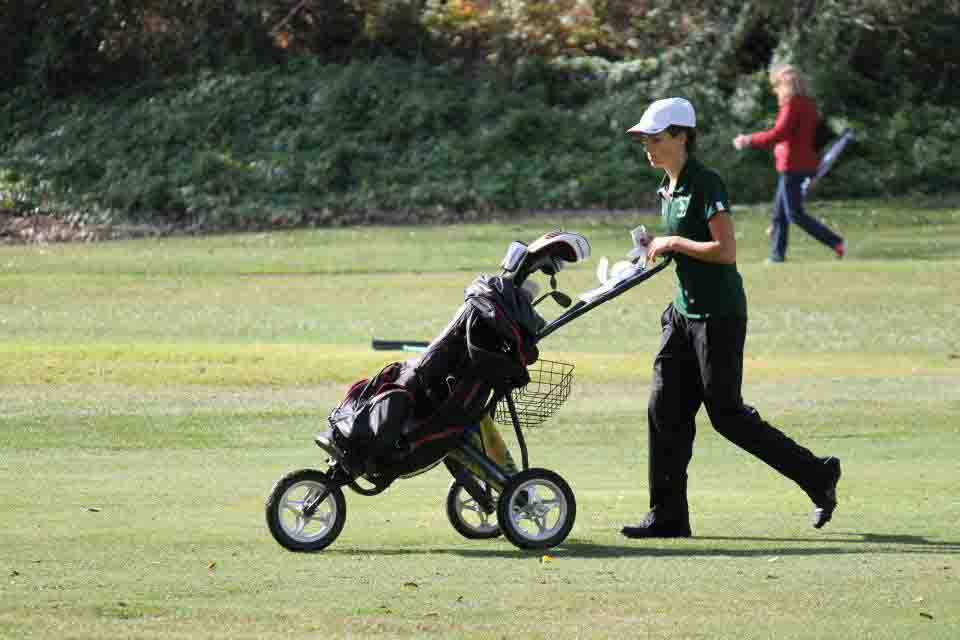 Senior Audrey Horn pushes her golf clubs at the CIF state tournament. Horn shot a 90 at the CIF State Championship in her first year on the team.

The team put up an aggregate total of 423 strokes, placing fourth in California after Torrey Pines, Walnut and Diamond Bar High Schools. Individually, Xie golfed a 74, while, senior Annie Chen and freshman Emily Hwang each finished with an 80. Senior Audrey Horn, a newcomer to Paly, finished with a 90.

Xie is proud of her team’s performance considering it was the first year of the program. Xie has shot several hole-in-ones through the season.

“This year was our first year and so we were super excited to be able to make it to states,” Xie said. “We made sure that we kept on improving, trying to get [better].”

The girls’ golf team is composed of a variety of athletes of different backgrounds. Xie competes in golf tournaments independently and flied across the country to Florida to compete in an outside-of-school golf tournament just days after CIF State Championships.

Xie was surprised by how well the team got along and how many girls signed up. In addition to a new member from out-of-state in Horn, the team also attracted junior Sophia Robinson, who is relatively new to the sport.

“I thought it would be fun and something completely different,” Robinson said. “I wanted to try something new and fun. I’ve only been playing for about six months now.

Robinson hopes to work on her game and come back next year even better, given that her performance was not as good as she had hoped for .

“I definitely think I’m going to try and improve more now that I’ve seen how awesome the game is,” Robinson said. “I think it would be super fun to do golf again next year, I really enjoyed playing with the team.”

Robinson had chosen to play golf this year over cross country, which she had participated in for two years prior. She is unsure of whether she would like to continue with the sport, given that she might want to return to cross country again.

“The only confliction that I have [with playing on the golf team next year] is that I really miss cross country.” Robinson said.

Ironically, the entire team is going to either take physical education next year or must take another sport to have a prep. All of the juniors and seniors on the team have either a semester or a year left of PE, including Robinson, who did not take PE freshman year.

The team grew surprisingly close over the course of their first season, netting some strong results in tournaments as well.

Note: Senior Audrey Horn shot a 90 at the CIF State Tournament, not at the Central Coast Section (CCS) tournament. This version of the story has been edited. We are sorry for any inconvenience.