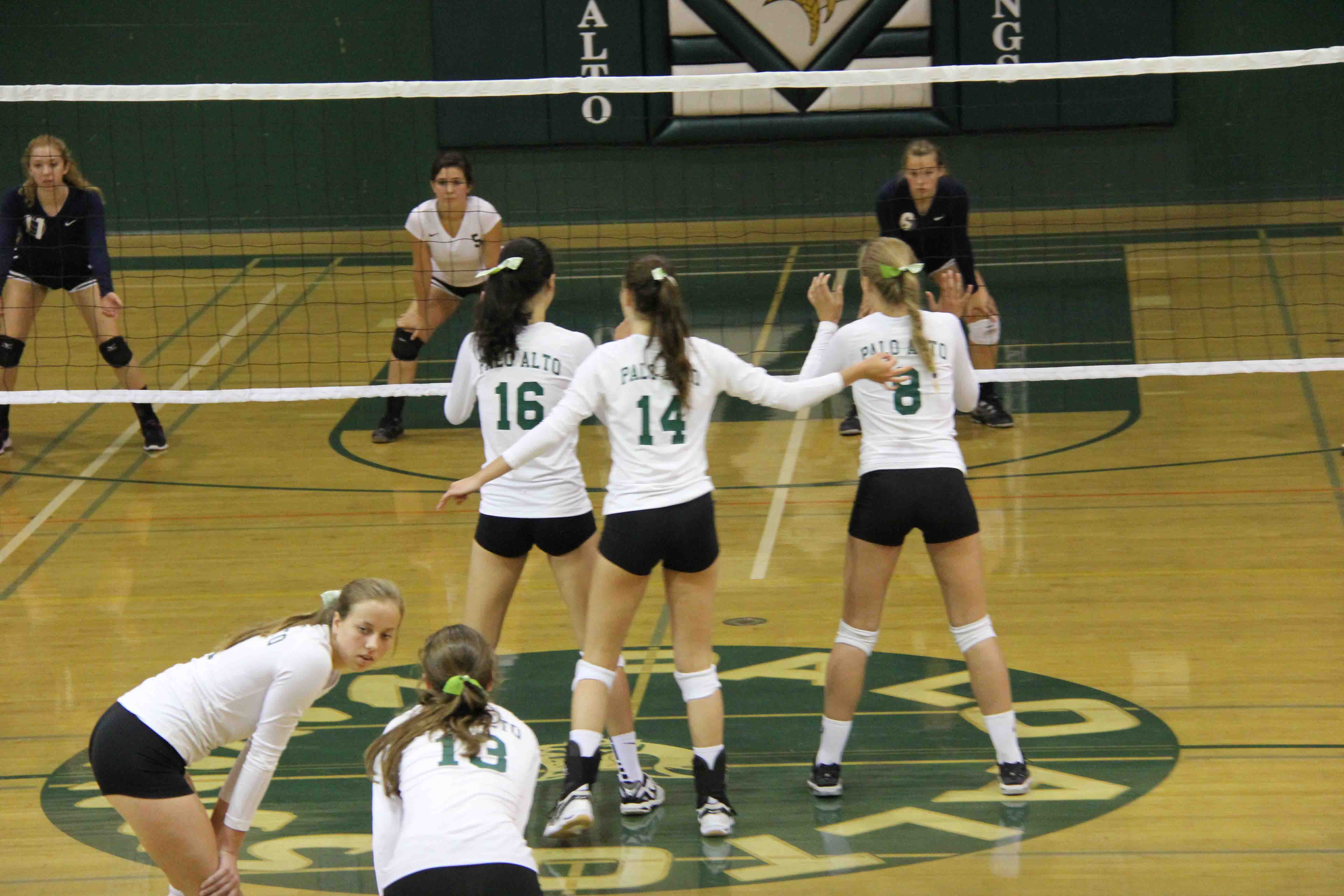 The volleyball team prepares to receive the serve in a regular season game at Paly.

“I think we did a good job starting off strong,” senior Becca Raffel said. “They had a lot of fans there, so I was proud of the way we were able to just focus on our side of the court and our game and pull out a win. We have to play as hard as we can against Menlo-Atherton High School and do our best to try to make it back to CCS. ”

Claire Dennis was selected as the player of the match. The sophomore had a season high six blocks to go along with her exceptional hitting performance, with ten kills and no errors on fourteen swings.

Keri Gee also had a notable performance, with 41 digs. Raffel and junior star Jade Schoenberger, had fourteen kills each.

“Going into the game, we were well prepared for a line up which we assumed they would put out,” Schoenberger said. “After they switched things up … I feel we did a great job adapting fast. What really differed the two teams was our execution in the middle. Both Claire [Dennis] and Lauren [Kerr] dominated at the net with both blocking and hitting. By the end of game three, which we lost, I feel you could clearly tell we were the team that wanted to win. We went in minimizing errors and bringing great energy throughout.”

Despite high hopes for a win after beating San Benito, the team lost to Homestead High School in the CCS finals on Nov 23. The team was looking to come back and beat the team after two losses to Homestead High School in league games, but were unable to get their revenge. Beaten in four matches, Paly started off strong winning the first set, but were ultimately overcome by the Mustangs in the remaining three. Despite their loss, Palo Alto was happy with the team dynamic and hoped their loss would add to their motivation in future games.

After their CCS loss, the team moved on to Nor Cals, and was able to defeat San Roman High School 3-2 in the quarterfinals. Although the team felt prepared going into the game, they lost to Granite Bay High School in the NorCal semifinals on Nov 30.

The team was happy with their overall record and season in general.

“We had an amazing season, and we did much better than people thought we would,” junior Abby Strong said.