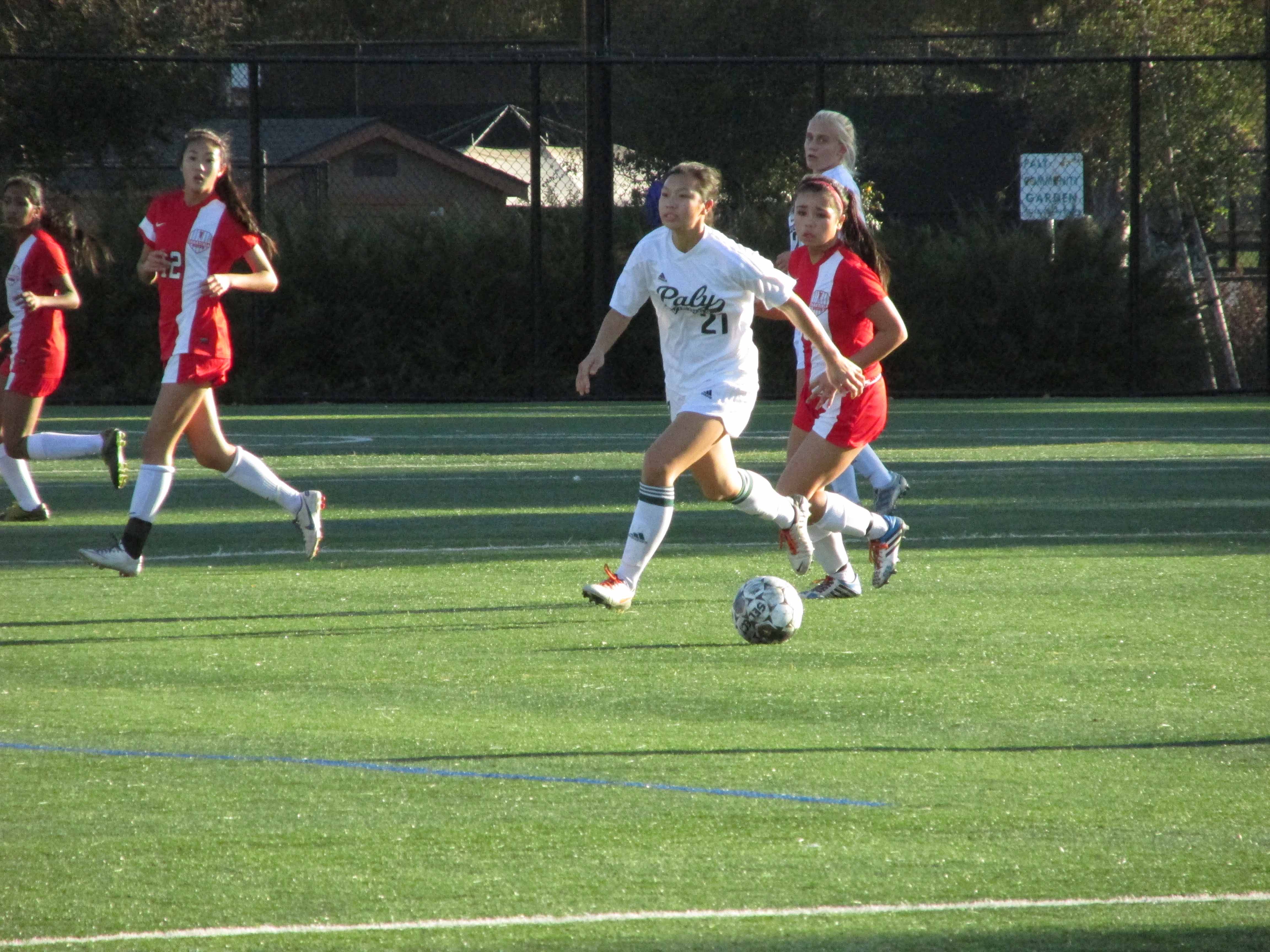 Sophomore Allison Lu dribbles the ball in a recent home game against Saratoga High School. The Vikings won this game 3-0 to improve to 2-0 in league.

The Palo Alto High School girls’ soccer team has begun its season with an overall record of 5-2-3 and a league record of 2-0-2, and is enjoying a streak of success, going undefeated the last eight games.

Although this record is far from negative, the team is not satisfied with its results so far.  According to sophomore Alys Olmstead, the team is capable of performing at a much higher level than it has to this point, despite recent successes it has achieved.

“I don’t think we came out as strongly as we could have,” Olmstead said.  “We haven’t reached our full potential yet. But we’re getting there.”

Senior captain Megan Tall agrees that the team has more potential than it has shown, and feels that the team’s record could be much better than it is.

“Our full potential has not been shown yet,” Tall said. “We haven’t been very consistent in our level of play so far, combined with a lot of bad luck. We could [have easily been] undefeated so far.”

“Some things will be on point one day, then other things the next day,” Bell said.  “I think that once we put together all that we’ve been talking about in practice, we will perform better than we have in some previous games.  I can definitely say that I’m happy with where we are.”

According to Bell, the thing that makes the girls’ soccer team excel is its chemistry.

“We have great team chemistry, and I don’t feel like anyone is separated from the team,” Bell said.

The strong team chemistry can be attributed to numerous team bonding activities such as team dinners and sleepovers.

“[Team bonding] definitely helps with team chemistry and having all the girls feel like they are part of the team,” Olmstead said. “We don’t all play for the same club teams or have the same skill levels going into Paly soccer, so with the team bonding, everyone feels like they are supported and respected for what they can contribute to the team.”

According to Tall, these activities translate directly to the team’s performance.

“We get to know a lot about each other, which translates well onto the field,” Tall said. “We are able to communicate without criticizing each other.”

Dressing the new players on the team in crazy outfits that they must wear to school is a Lady Vikes’ tradition. The team views it as a harmless, fun activity.

“It’s our way of accepting [the new players] onto the team,” Tall said. “Sometimes, it’s hard to bring a new player onto the team because it can mess up the chemistry, but more activities we do as a group, the easier it is to avoid that.”

Through these team bonding activities as well as hard work during practice, the team believes it will continue to improve.

Recently, the team played Mountain View and overcame a two goal deficit with a second half comeback.

“[Mountain View was] probably the best team we’ve played yet,” Assistant Coach Eric Seedman said. “They kind of took it to us in the first half, but the coaching staff challenged the girls at halftime, and we came out with a two-two tie. We’re pretty proud of the girls.”

The girls play at Los Gatos on Friday, where they hope to keep their momentum going, and continue to push for a league title.

“We play the first place team, Los Gatos, and we’re certainly within striking distance of them,” Devlin said.  “If we beat them we would have a chance to move into first place.  We hope to go on to [Central Coast Section (CCS) playoffs], and we feel that we’re as good as anybody, so the sky’s the limit for us.”