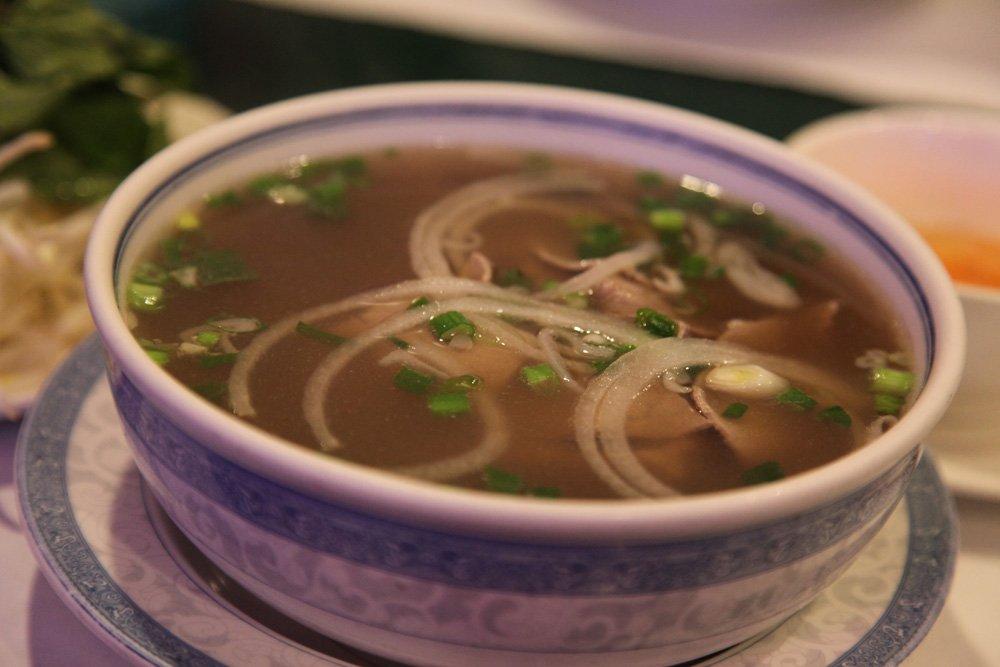 Pho is a refreshing, delightful and filling Vietnamese dish. Pronounced “Fuh,” this out-of-the-ordinary meal has become quite popular amongst Palo Alto High School students. Before diving into this soup sensation, there are a couple things you need to know.
Though pho is Vietnamese, most pho restaurants have good, if not great, Thai Iced Tea. Another popular drink is the Soda Lemonade, which consists of sugar, squeezed lemon, and sparkling water. For those with more adventurous taste buds, the Vietnamese Iced Coffee presents an extremely sweet yet bitter, cream-filled version of the traditional iced coffee.
Goi Cuon, pronounced Goy-Coon, are Vietnamese style spring rolls. This go-to pre-soup appetizer– usually filled with shrimp, lettuce, beef and bean sprouts – is fresh and wrapped tightly in rice paper. Do not forget to dip these into the peanut sauce provided, as this is what makes them exceptionally delicious.
Beef is the best tasting meat in pho and gives the broth a nice flavor. If you aren’t careful, then you might order not only the steak, but also the tendon, tongue and intestines of the cow. Stick to brisket and eye round steak when ordering your soup. If you prefer chicken or seafood, these meats can prove to be equally tasty.
Hamburgers and hot dogs aren’t the only food made drastically better by a selection of toppings and condiments. Pho too needs some additions in order to maximize the delicious potential. The single most important sauce is the hoisin sauce, which will be in a Lee Kum Kee brand bottle nine out of 10 times. This sauce makes the broth so much better. Some people even dip their noodles and meat into hoisin sauce even after adding it to the broth. The next most popular sauce is Sriracha. This red chili sauce adds both flavor and spice to the soup, but it is not for the weak tongued.
Excessive amounts of either sauces can be devastating, so start small and go big from there. Other toppings are presented on a dish next to your soup and include greens such as bean sprouts, mint and jalepenños. These extra toppings are up to you and can be tested with individual bites.
After adding the correct sauces and vegetables, you should know how to go about eating it without looking like a fool in front of both your Vietnamese waiters and those around you. If you can’t handle chopsticks, ask the waiter for a fork.
If you can handle chopsticks, grab a pair and put them in your stronger hand. Then pick up a spoon and put it in your opposite hand. Meat and noodles are to be handled with chopsticks and broth is to be handled with the spoon, but often times this occurs simultaneously.
All pho restaurants have relatively similar prices, around $8 for a huge bowl of soup and $1-2 for each Goi Cuon roll. Pho Vi Hoa has the best actual pho and Goi Cuon in the area. Pho To Chau has the best service in the area and is the only pho location to offer a “small” option that is actually small. Pho Garden is home to the largest bowl of pho and the Pho Challenge, containing over four pounds of noodles and beef so this presenting an interesting option as well.