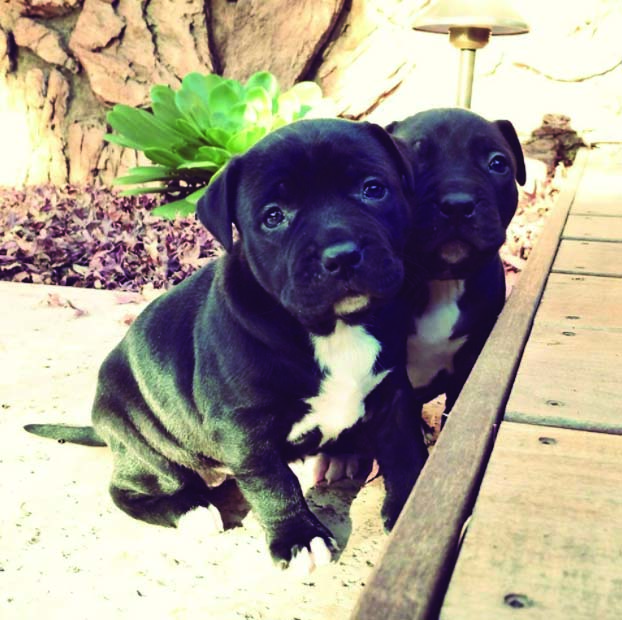 Senior Andrea Clerici-Hermandinger has fostered the above two puppies, Lilo and Stitch, since the day they were born. She also fosters their mother, Amanda.

While fostering dogs may not be a popular option that comes to mind, it can be a better choice than adoption.

In senior Andrea Clerici-Hermandinger’s case, it started off as a compromise with her parents who did not want to adopt a dog.

Though Clerici-Hermandinger kept trying to convince them, her parents did not want the commitment, especially since she will leave for college soon. However, they soon managed to come to an agreement.

“I was looking through adoptable dogs and came across a puppy that urgently needed to be adopted or fostered,” said Clerici-Hermandinger. “So I convinced my parents to meet me halfway on adopting a dog [and] we compromised with fostering.”

However, she did not stop there: she has continued to foster dogs ever since, ranging from one to three at a time.

Aside from enjoying the company the dogs provide her, Clerici-Hermandinger realized that by fostering, she is giving the dogs a chance to live.

“You realize the amount of dogs in high-kill shelters who are perfectly adoptable who end up getting killed because there is no room for them, especially puppies,” Clerici-Hermandinger explained.

Fostering dogs, as Clerici-Hermandinger found out, has many positive attributes.

In addition to saving a dog from being killed from lack of space, in some shelters, it allows them to rescue another dog in place of the one a foster family is staying with. Also, fostering allows rescue dogs to get accustomed to a home environment, preparing them for adoption.

She began fostering the dogs when the puppies were less than a day old, and now they are about nine weeks old. Lilo has been taken to her new home and Stitch was picked up shortly after.

The mother dog still does not have a home, so Clerici-Hermandinger expects to be fostering her for another month or so.

Though a fostering cycle is typically two months, fostering a dog requires as much care, love and dedication as adopting a dog and it comes at the same expense.

“[The] biggest challenge [with puppies is] cleaning up their mess, house [training] them, and being awakened by their whimpering at night,” Clerici-Hermandinger’s parents Marcelo Clerici-Arias and Alejandra Hermandinger said.

For families who are considering fostering a dog, Clerici-Hermandinger’s parents truly recommend it as long as the foster family is willing to put in time and dedication that is required.

“If you cannot commit to the long-term care of a dog but you do love dogs and you have two to three months when you can dedicate a significant chunk of your time to caring for a dog, then do foster a dog, save his [or] her life, and make him [or] her, as well as a loving human family, very happy,” Clerici-Hermandinger’s parents said.

Overall, Clerici-Hermandinger has found fostering dogs to be a very valuable experience that has truly taught her responsibility.

Although she claims that it is hard to part with the dogs she fosters after their need to stay in her home is over, it does have one benefit.

Clerici-Hermandinger keeps in mind that letting go of a dog enables her to take in and help another dog.

“After building a relationship with each of these dogs, it’s hard to see them go, but at least you know they’re going to a good home and they keep you updated as they grow up which is nice to see,” Clerici-Hermandinger said.