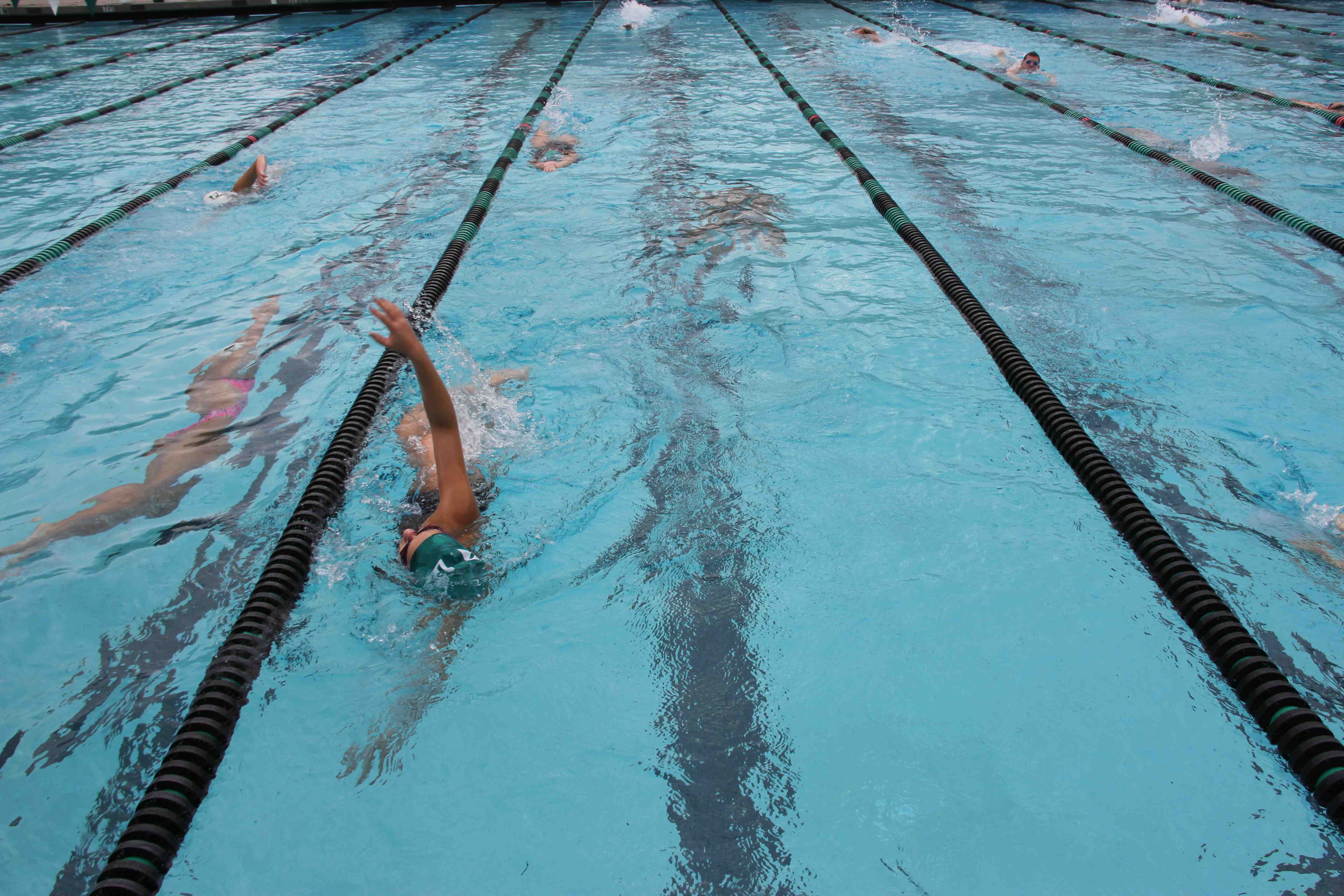 The girls swimming team starts the season off on a high note with two wins against Menlo School and Menlo-Atherton High School. The tri-meet did not count toward the league title, which Paly hopes to reclaim the league title from crosstown rival Henry M. Gunn High School, but is a good indication of the season ahead.

Both of Palo Alto High School’s girls swimming and diving teams have started off their seasons with low-pressure home meets. A swimming tri-meet took place on Feb. 28 and the swimming and diving Paly Spring Invite will take place on March 7 and 8.
Even though the weather during the tri-meet was poor and wet, and the team was missing a few swimmers, the girls swim team was able to win the meet against both Menlo School (124-41) and Menlo-Atherton High School (99-65), to start off the season with a record of 2-0.

“Overall, I think the meet went very well,” senior swim captain Karina Goot said. “Even though it was rainy and windy, everyone stepped up to the challenge and swam their best.
We were swimming with a partial lineup, as some of the girls are competing at a meet in Texas, so I was very happy with how we did overall.”

The tri-meet on the Feb. 28 was a successful start to the season, but does not count towards the league title the team is hoping to win back from rival Henry M. Gunn High School.

“This meet doesn’t count towards leagues,” sophomore varsity swimmer Emily Zhang said. “But it is helpful just for everyone on the team to see where they’re at.”

Although the team performed well at the meet, Goot knows that there is more the team can do to further improve its times.

“After this meet, we are looking to improve on stroke, and continue working on technique, starts and turns, because that’s where we can drop more time,” Goot said.

Swim practices have been going smoothly, but getting increasingly rigorous as the season progresses, with daily afterschool practices and up to three morning practices a week.
Like many other Paly athletic teams, the girls swimming team is hoping to bond throughout the season, beginning with dressing up in costumes on days of meets.

“Varsity girls are going to wear flannels because our coach, Danny [Dye], has been wearing them a lot lately,” Xu said.

The girls teams will both compete at home during the Paly Spring Invitational on March 7 and 8. Similar to the tri-meet, the meet will be quite informal, and will not count towards the leagues, but will be a good way to ease into the season.

“The meet isn’t a high pressure meet, and should be just a nice [introduction] to the season,” senior diving captain Phoebe So said.

The diving team’s performance at the Paly spring meet will be an indicator of what the team should focus and work on before they begin swimming in postseason meets.

“We should all try our best and it’s a chance for [Coach] Danny to see where we are and how we should prepare for the rest of the season,” So said.
The teams will compete in their first league meets next week Homestead High School, swimming on March 13 and diving on March 14.