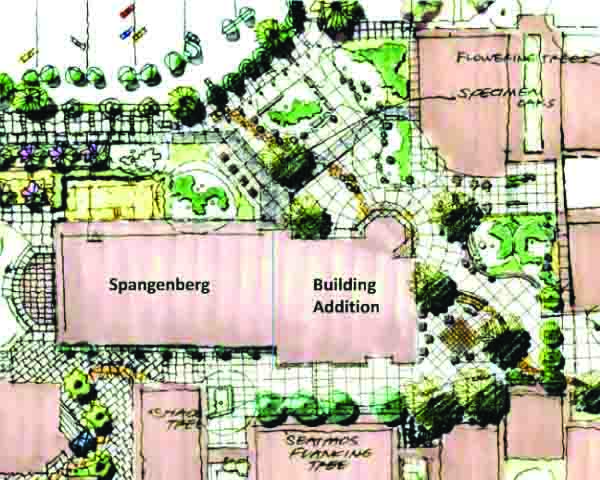 The design for the addition to Spangenberg Theatre is currently in process, but the current sketch of the building would have a new lobby for the theatre and more trees at the entrance. The addition will also have music classrooms for the music program.

Earlier this month, the Palo Alto Unified School District (PAUSD) approved a plan to demolish the music building in front of the Spangenberg Theater at Henry M. Gunn High School and replace it with an improved building. The project is estimated to cost $19.4 million and is currently in the early stages of development.

PAUSD has contracted DLM Architecture as the architect of what is now being called the Central Building Project. DLM has created conceptual designs which offer many additions to the current entrance to Gunn. The plans include an upgrade to the current Spangenberg Theater lobby, which would introduce new restrooms, office space, a ticket office and storage room.

Along with improving the Spangenberg Theater, the project also entails building new music rooms, extra classrooms and more offices. While there are still many designs to choose from, some offer many more additions to the building.  Some of the notable additions include a college and career center and a wellness center.

The current conceptual plans include the possibility of a large courtyard that will be partially covered and partially open. This area will be placed in between the improved Spangenberg lobby and the proposed new building that will hold the classrooms and office space.

With the continued rise in student population at Gunn, this addition will be very beneficial addition will offer more space both for students during breaks and for students in class. With the possibility of up to three new classrooms, the school may be able to ease some of the overcrowded classes and move a new section of music classes into the added building.

The Central Building Project is still very open in its designs. There is a possibility of adding a second story to the project.

Another benefit to this project is that it aims to improve the aesthetics  of the entrance to the school. The building will have a newer look and will hopefully be inviting and aesthetically pleasing to students, parents and other members of the Gunn community.

While this project is still in the phase of development, the School Board giving DLM the green light will make this project continue to move along. The project will not begin this year, but it may break ground as early as 2015.