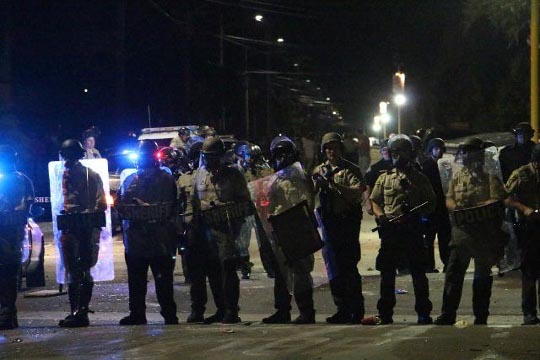 Police stand together to stop the riot

On April 5, the yearly ‘Deltopia’ party in Isla Vista, Calif. broke out into a riot, resulting in over 100 arrests and 40 injuries of the attendees and at least six law enforcement personnel injuries.

The renowned spring break celebration is estimated by officials to have had 15,000 attendees, most of which were students of the University of California, Santa Barbara (UCSB) or other nearby colleges. Violence broke out at around 9:30 p.m. when an officer arrested an attendee who struck the officer in the head with a backpack containing large bottles of alcohol. Members of the crowd subsequently began throwing rocks, bricks and bottles at the officers, as well as lighting small fires and damaging property such as car windshields and stop signs.

The events escalated to the point to which the Santa Barbara Sheriff’s Department had to declare a “major disturbance, emergency situation” and request aid from neighboring Santa Barbara and Ventura county’s police departments. They also used non-lethal weapons in attempts to disperse the crowd, including pepper spray, chemical agents and foam projectiles.

This year, a noise ordinance was issued for the ‘Deltopia’ festivities, with an aim in part to prevent the out-of-control partying that had been observed in years prior. Several UCSB students claimed in various interviews with local media sources that the stricter monitoring of the party could have angered out-of-towners who came with higher expectations, thus fueling some of the outbursts that led to the riot.

The UCSB Student Government (Associated Students of UC Santa Barbara, ASUCSB) issued a statement to KEYT news on the following Monday, April 7, lamenting the chaos that escalated on the night of the party.

“What happened the night of April 5, 2014 in Isla Vista was tragic and the students of UCSB are in part to blame for it,” ASUCSB said. “Any large event held in such an unofficial capacity is doomed to end in chaos. We, the Associated Students Executive Officers of UCSB, mourn the injury of six dedicated law enforcement officers and countless community members. We believe UCSB and UCSB students must take responsibility for the events of April 5, 2014.”

Additionally, the ASUCSB called for a civil Grand Jury investigation on the disturbance.

“In no way is this a unilateral critique of the response of Isla Vista Foot Patrol and others on the night of April 5, but we do have a stake in knowing what happened, when it happened and why it happened,” ASUCSB said. “The community at large, including the rest of Santa Barbara County, deserve to know. We will be requesting a Civil Grand Jury Investigation into the events of April 5…We simply think that the more information we have on this event, the better equipped we will be to prevent it from ever happening again.”

As these events occurred in the month during which thousands of high school seniors, including many in the PAUSD district, are making decisions on what college to attend, students and parents may be concerned about the safety in UCSB. The ASUCSB feels, however, that after the investigation on the events, they can make the Isla Vista community safer and prevent such events from happening again.

“When the investigation is concluded, we look forward to working with all of Isla Vista’s stakeholders to improve the health and safety of our community,” ASUCSB said.