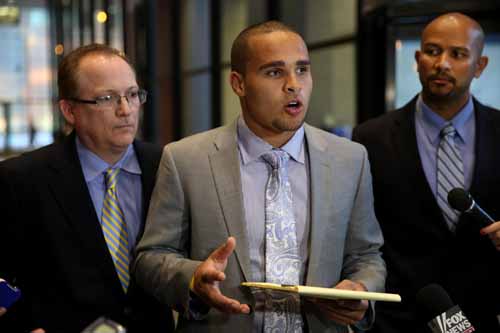 Kain Colter, a Northwestern University football player, addresses the media after presenting to the National Labor Relations Board.

Earlier this month, a big step in college football was made when the Northwestern University football team officially unionized. It all started last fall when football players from some Division I colleges, including Northwestern, began standing up against the current system by wearing wristbands during their games with the initials APU which stands for “All Players United.”

The next major step came on March 26, when a regional director of the NLRB (National Labor Relations Board) ruled that scholarship football players at Northwestern University are indeed employees of the university, thus allowing them the right to unionize and fight for better health care coverage, larger scholarships and other benefits. This is a major landmark in collegiate athletics and it is probable that other schools and sports will follow the actions taken by the Northwestern Football team in these matters.

Participating in Division I athletics is a huge commitment and students’ participation only benefits the school’s economic objectives. Student-athletes put their personal health on the line to participate at their school’s expense and get nothing in return except for scholarship aid, which is much needed by many of these athletes. The other thing to remember is that athletes don’t get course credit for participating, thus they have no incentive to stay on the team once they get into college to continue playing unless they have a scholarship.

The NLRB only regulates private institutions so there still may be some work to do to before Division 1 players from all schools are able to unionize, but this is still a major step in working towards a solution.

Northwestern will appeal the ruling, but it is expected that the ruling will be upheld. The institution is arguing that the NLRB ignored relevant facts during its review such as the evidence of Northwestern’s primary commitment to the education of student athletes.

Schools in California may be next due to the state’s union-friendly reputation toward athletics. Many people have speculated it would be an easy case to argue because scholarship athletes are not playing their sports in the classroom.

The bigger question is whether student-athletes want to unionize. The Northwestern Football players have yet to officially vote to form a union. In order to unionize, the scholarship players would need to reach a majority in favor of doing so. One risk of collective bargaining is it may violate NCAA regulations if they were to negotiate a deal in which they would be paid for playing. However it was reported that they are only hoping to achieve full guaranteed scholarships, better oversight of head injuries and comprehensive medical coverage through unionizing.