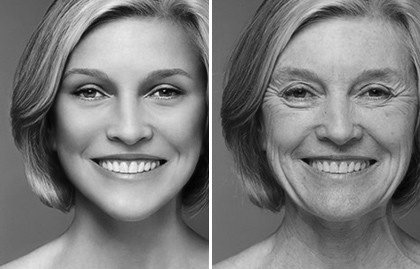 Edited photos, such as the one shown above, are distorting the idea of natural beauty and being used by teenagers as the “standard” of idealized attractiveness.

Through the last 20 years, technological advances, such as Adobe Photoshop, have brought major changes to popular media. Photoshop, which was initially released in 1990, has since grown into an extremely popular tool used by photo editors for all forms of media, from magazines to music videos and more.

Though the tool is extremely useful, it has been extremely disputed and controversial in its power to alter the perception of the ideal human body to be unrealistic and impossible to achieve.

Many have spoken out against advertisements where women, and sometimes men, are altered to appear unproportionally thin and skin airbrushed to remove all blemishes, and the negative effects it has on beauty standards; however, few have talked about how this tool has been but in the hands of the average person.

These adolescents girls also are able to download free applications on their smart phones to digitally alter images in order to look more aesthetically pleasing. These applications can soften skin, whiten teeth, slim any part of the body and even apply a digital layer of cosmetics.

With these applications, such as Pefect365 or Facetune, so readily on hand, it is easy for one to give in and test them out on their own image and watch the dramatic changes right before their eyes.

Adolescents use these photo editing tools in order to more closely resemble the ideal beauty standards of today; photos posted on Facebook no longer resemble a person’s true sense of self, but a facade put forward in order to share with the community of their assimilation and compliance to society’s vision of beauty. They then get sucked into the cycle, continuing to use photo editing software in order to maintain their “beauty.”

With this technology, it is slowly becoming harder to remember what people are supposed to look like in reality. Adhering to the standard portrayed by professional models, whose images are edited themselves, only depreciates the idea of natural beauty.

These applications dramatically worsen the impossible ideals for aesthetics today, tainting and distorting girls’ images of themselves, and coerce them to edit their photos to fit in.