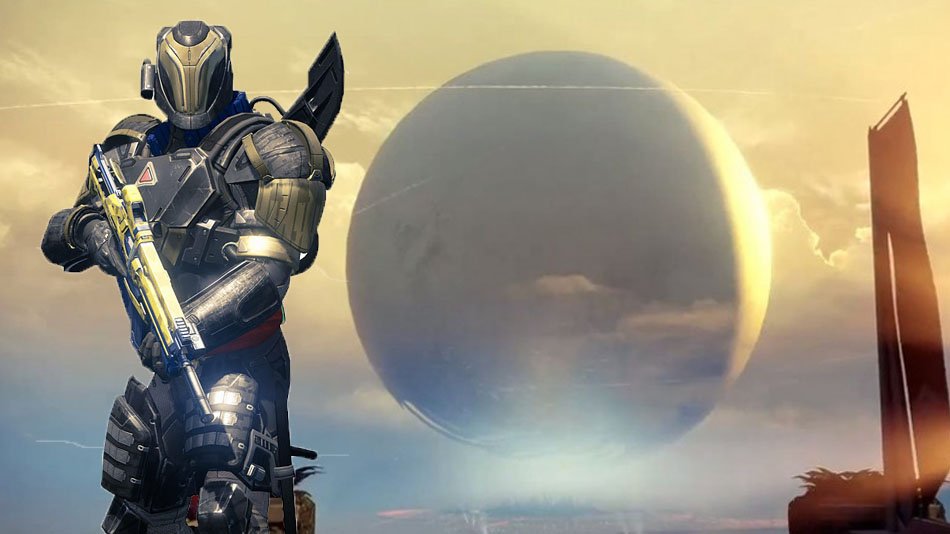 A Titan, one of Destiny’s three classes, poses in front of The Traveller, the mysterious celestial orb that drives the game’s story.

In December 1994, upstart video game studio Bungie began its production of revolutionary and quality games with its first person shooter “Marathon”. The game introduced mouse controlled free look to gamers who had previously been trapped by restrictive view controls in early shooters like “Doom”. This feature later became ubiquitous in shooters and other games following it. But Bungie was just getting started. In 2001, “Halo: Combat Evolved” was released as a launch title for the original Xbox and started one of the most popular and lucrative franchises in the history of gaming. But after the release of “Halo: Reach,” the polarizing fifth game in the series, Bungie decided to leave their beloved universe in the hands of 343 Industries.

This was not a decision made out of fatigue or abandonment, rather the studio simply had bigger and better things than “Halo” to move on to. This new project had been rumored and speculated on since 2009 and was officially announced in 2012 as an ambitious, genre-bending game titled “Destiny”. But does the game live up to the hype that it has accumulated in the anticipation of its long awaited release?

“Destiny” is by gameplay a first-person shooter, but it tries its best to avoid being pigeonholed into one genre. Incorporating elements of massively multiplayer online games such as World of Warcraft, “Destiny” requires an online connection at all times to play and matches you with other players online as you explore the open world or tackle intense raids and strikes that would be impossible without teamwork. This social aspect is what the game is centered around and it works smoothly and benefits the story and gameplay in equal parts.

The story of “Destiny” is based on a mysterious sentient celestial orb called the Traveller, which came to earth from deep space and proceeded to share its knowledge and powers with humanity to propel us into a golden age of colonization and advancement throughout our solar system. However, the Traveller’s sworn enemies, called the Darkness, followed it and proceeded to destroy all of humanity’s progress. The game is set in post apocalyptic planetary wastelands and involves fighting endless swarms of various alien species bent on your destruction. The goal of the game is to uncover the mysteries of the past and make a final push for humanity’s survival.

From the minute you start the game, with the versatile character creation system and intense first mission, the level of detail and thought put into every aspect of the game is apparent. The environments feel rich and full, and its graphics look strikingly beautiful and realistic, even on previous generation systems. The maps are expansive, the enemies are varied and the design of the hundreds of guns, armors and other collectibles is elegant and intricate. This attention to detail helps the game be a truly immersive experience from the very beginning.

As you move forward through the campaign missions and level up your character, you unlock different locations and abilities. The game’s universe consists of Earth, the Moon, Mars and Venus, each with its own expansive map that is freely explorable. The locations are all beautifully designed and despite being limiting by only encompassing one area of each planet, warrant many hours of exploration before you’ve seen everything.

The story makes these familiar planets fresh and exciting through elements like having Venus be a terraformed jungle world with volcanoes that spew toxic chemicals, or the Moon having a huge network of underground catacombs and temples infested with undead space wizards.

The combat in “Destiny” is commonly described as a mix between “Halo” and Activision’s other property, the beaten-to-death prepubescent cash cow “Call of Duty.” Thankfully, the similarities with the latter end at the left trigger “aim down sights” system employed in many shooters today.

While some of the enemies behave in similar ways to the “Halo” series Covenant army, the plethora of different alien races in the game continuously forces you to think differently about how to approach a battle based on the foes’ specific strengths, weaknesses and behaviors. This variety also keeps the combat interesting through the sometimes lengthy time you spend grinding to level up.

No competitive first person shooter (FPS) title is complete without a competitive online multiplayer mode, and the game’s more than delivers.

A key aspect of success is weapon types, and although the game’s algorithms adjust the damage statistics of guns to make competition more even, other stats such as accuracy, rate of fire and “super” attacks that upgrade based on level matter significantly. This encourages grinding, exploration and leveling up in the story modes of the game in order to earn weapons and gear that work better for you in player vs. player matches.

In addition to the standard team deathmatch mode, there are gametypes such as Conquest, in which you fight to control certain strategic points on a map, and free for all, where the only goal is kill anything that moves.

Bungie has stated that “Destiny” doesn’t really start until you reach the endgame level cap of 20, and they intend to make good on that promise.

Once the game’s story is over, you can continue to replay all the missions at higher difficulties for better rewards or freely patrol planets to grind and gain more XP. There are also weekly strike missions that promise to challenge players in different ways and expand on the story. The culmination of this is the high level raid on the Vault of Glass, which is a six person collaborative effort that aspires to be one of the most difficult and intense FPS experiences to date. In addition, two downloadable content packages are scheduled for release within the next few months, which will add new missions and locations, further broadening the game’s universe.

“Destiny” is an incredible game on both current and previous generation consoles, and breathes fresh air and innovation into a genre that suffers from stale franchises and repetitive iterations of the same kind of gameplay.

By combining the best elements of shooters and MMOs with a compelling original premise and lore, the game aims to capture the interest of even the most jaded gamers. The budding franchise also promises to keep expanding and rewarding gamers throughout the next upcoming ten years, with 3 planned sequels and numerous expansions and additional content for each. Bungie has big plans, and “Destiny” is merely only the beginning.