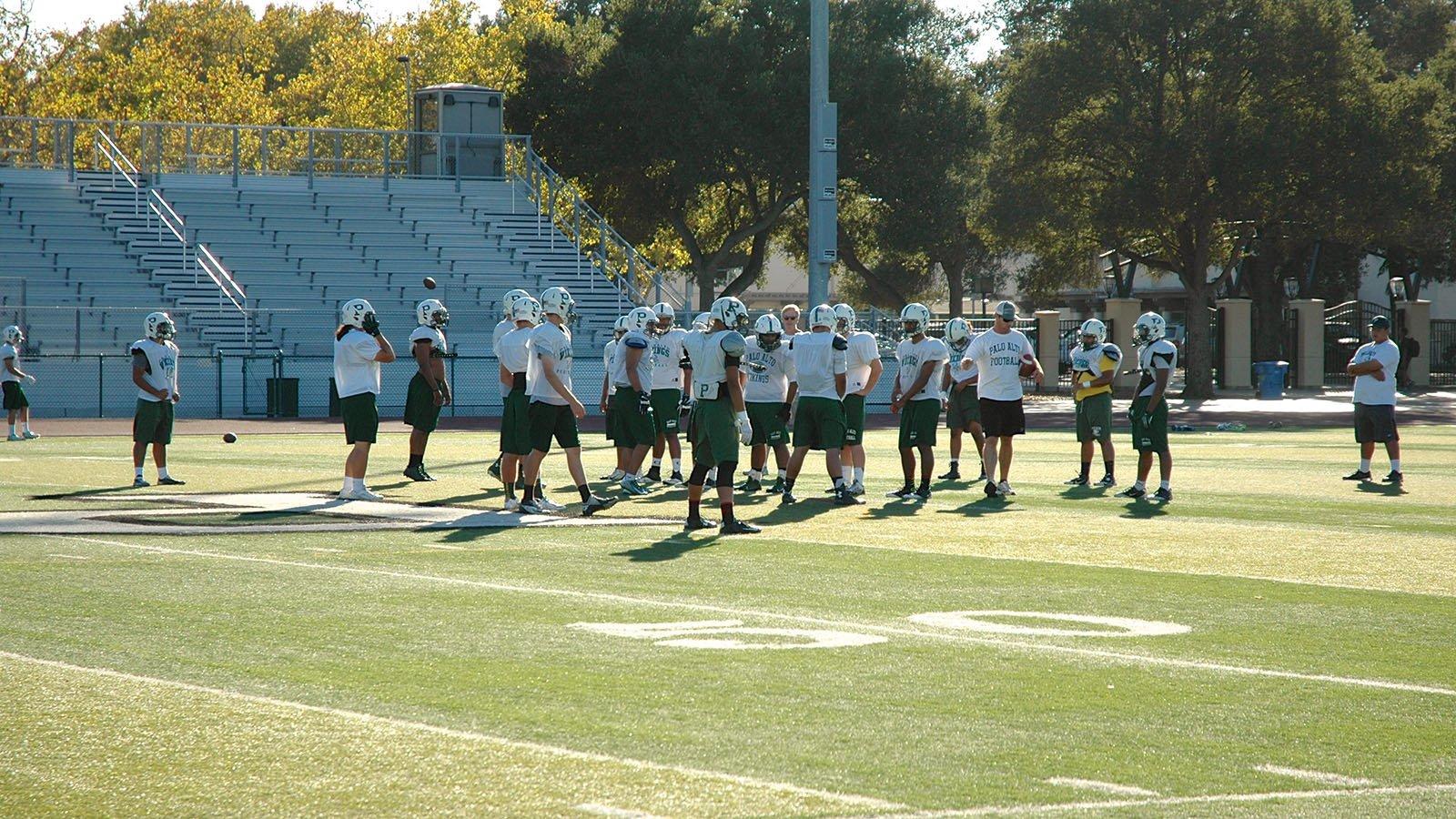 Members of the football team gather around their coach after a hard practice to discuss new tactics to win their upcoming games against Palma and Wilcox High Schools and to point out areas they are able to improve on.

The Palo Alto High School football team started its season off with a bang, with an exciting last second victory against Sequoia High School.

Paly was leading the game 20-7 up until the third quarter when Sequoia mounted a comeback and took the lead 21-20.

“[Stopping them] felt amazing,” junior linebacker Shaun Pike said, “we all played together as a team and we played physical and we played hard. We all knew we had to make a stop and come up big for the team and we got it done.”

Junior quarterback Oliver Svirsky led Paly down the field to the red zone, where the team settled for a field goal from junior kicker, Jose Patino. The field goal cemented Paly’s victory 30-28.

“The Sequoia game was a great game,” Svirsky said. “I thought we played hard throughout even when things didn’t go our way. We kept fighting as a team and that was the thing that made it such a great game. I made a few plays but it was a great team effort and that’s why we won, because we believed in each other and stuck together. It was a great game and a great win it was a great feeling, but we need to bring that attitude every week,”

Paly secured the huge first victory on the road by batting down all of Sequoia’s hail mary attempts on the ensuing drive.

On Sept. 12, the team travelled to San Benito where it faced the Haybalers.

This game was noticeably different from the first game, as Paly lost 33-0 in a game where disorganization and mistakes ran rampant.

“We didn’t execute our plays as a team, and [we] just didn’t play Paly football,” junior free safety Riley Shoeben said. “It’s a big punch in the face losing a game like that and I hope it motivates us for the rest of the season.”

The Vikings had their first home game on Sept. 19 against rival powerhouse, Archbishop Mitty. The game was definitely an exciting one.

After Mitty, Paly will go on to face Palma High School on the road on Sept. 27 and following that, Wilcox High School at Paly on Oct. 3. Paly will hope to be 4-1 after the Wilcox game, but this won’t be easy.