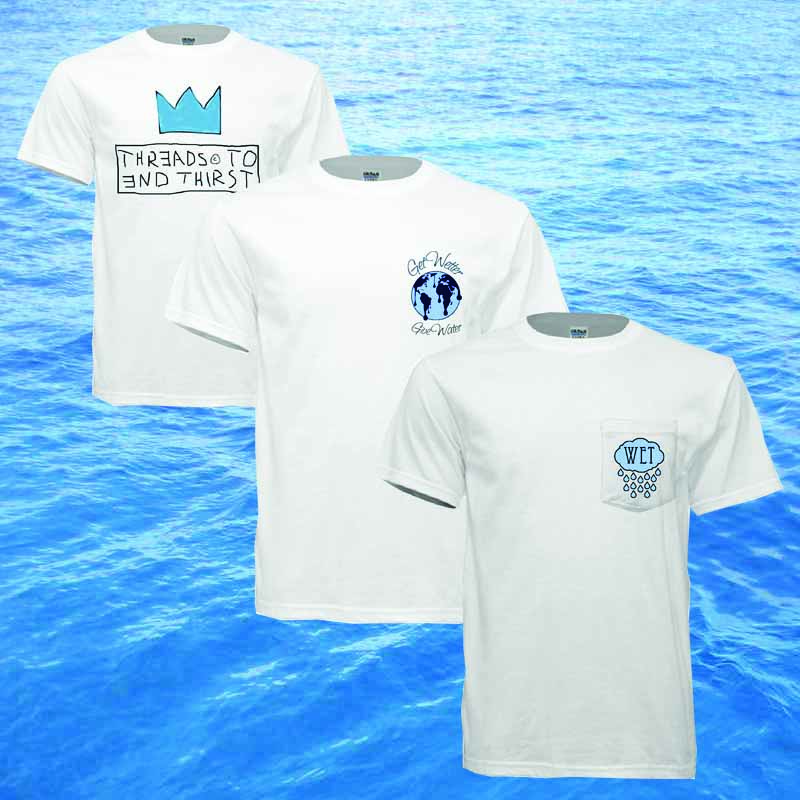 Alumnus Kian McHugh’s collection of clothing, GET WETTER, donates a portion of its proceeds to the Charity Water Foundation.

According to United Nations Water’s website, 780 million people in the world live without access to clean water, and every 21 seconds a child dies from a water related disease.

Palo Alto High School graduate Kian McHugh, class of 2014, started a project called GET WETTER, a clothing line that donates 20 percent of its proceeds to the Charity Water Foundation to help bring clean and safe drinking water to developing nations.

McHugh started this project during the summer when he was presented with a lot of free time.

“When all my friends had already left to college and my friends in high school were already in class, I had a lot of time to pursue any opportunities that I had been putting off until this period of time,” McHugh said. “I had always really wanted to do something in the design or clothing industry so really I just said ‘you know what, I’m gonna go for it.’ So then I just started doing some designs and  I came up with the whole [give] 20 percent [to charity] idea”

McHugh says that TOMS, a charitable shoe company, has definitely inspired part of his project. He believes that not many companies allow consumers to give to charity while purchasing a product for themselves.

Although there are many charities similar to Charity Water, McHugh chose this foundation specifically because it is one of the most prominent.

McHugh’s passion for pop culture, fashion and making a difference shows through his project GET WETTER, which he describes as “a clothing line that allows you to look wet and give to a great cause.”

“‘Get wetter’ means to become cooler,” McHugh said. “Wet has always been a joke and a major word in my vocabulary. People always make fun of me for saying it, I make fun of myself for saying it and I overuse the word. It has almost become part of my personality so I used that as a chance to make it actually meaningful.”

GET WETTER’s clothing does not target a certain crowd. On their Indiegogo campaign the company states that GET WETTER is for everyone and that by buying a simple sticker pack, or even just sharing the campaign with a friend, one can help people around the world get one step closer to access to clean water.

McHugh describes the clothing featured on GET WETTER as a type of clothing he would want to wear.

“It’s what I would wear and they are based off designs that I’m interested in,” McHugh said. “For example one of the designs is based off of Basquiat, who is my favorite street artist, and another design is based off of your traditional pocket tee, so these are things that I personally think are wet. You’re gonna really embody the wet lifestyle and you’re also gonna be wet because you’re donating money to a good cause through buying clothes. You’re gonna look wet. The clothes are cool. Bo [Field and I] designed them, they’re tight.”

On GET WETTER’s Indiegogo campaign, GET WETTER has eight products available so far ranging from a sticker pack for $5, to custom t-shirts for $150, to a product available named “You are the Wettest” for $1000. This products includes an entire line named after you, in addition to receiving every piece of clothing available on GET WETTER and having your picture on the website.

McHugh will be attending University of California, Santa Barbara (UCSB) wnext year and hopes that GET WETTER will be up and running as a business and also as a major donor to the Charity Water Foundation.

“I am really hoping that I get it up and the website running  as soon as we can,” McHugh said. “All the designs for the first line are finished so really I’m hoping that it just is received well. I’ve had people from publications reach out to me and people are really liking the idea so I know that it has potential. I really just want to make it happen, so we’ll see where it goes.”