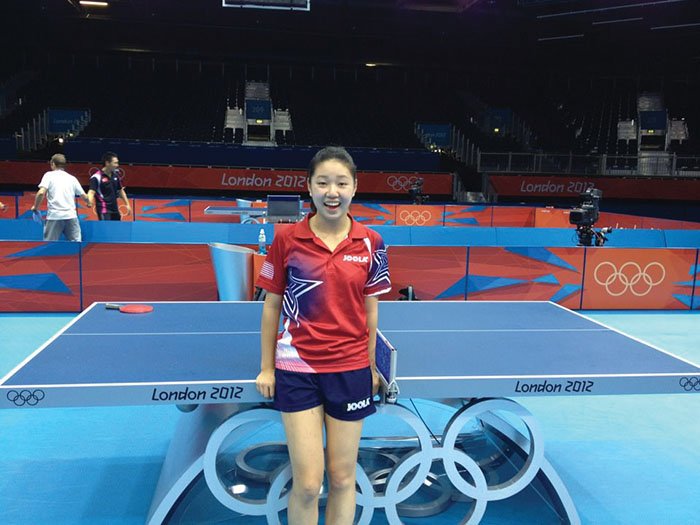 Lily Zhang poses at the London Olympics, where she was the youngest player of the table tennis competition.

Zhang, who graduated in 2014, won the bronze medal at the 2014 Youth Olympic Games Nanjing, China.
The Youth Olympics, which include sports events such as 3×3 basketball and badminton, have talented players that range from ages five – 18. Zhang had a large advantage over her opponents because she just touches the age limit.

Zhang won the medal after defeating Japanese table tennis player Miyu Kato, whom she had lost to in the Under 21 Women’s singles event at the 2014 ITTF World Tour Korean Open – Super Series in June. Zhang knew that Kato, who is ranked fifth in the junior world ranking, would be her toughest opponent in the tournament after the Korean Open loss.

“Miyu is an amazing player,” Zhang said in a Shanghai Daily interview. “I was able to calm myself down by telling myself to not think about the points. A lot of times I rush too much and then I keep losing more points. Winning here in China is an amazing experience.”

Her third place match with Kato did not come easily. Zhang gave up the first set with a 12-10 loss, but bounced back in the second set with an 11-9 win.

Starting from the fourth set, Zhang started to become focused on the idea of getting the points and winning the match and not the game itself. Zhang knew not to get ahead of herself and stay level-headed. Remembering the strategy and not focusing on the outcome.

Besides her strong mentality, another factor that contributed to her were her friends and family.
“My parents, my uncle and aunt and my grandma all came to watch me play which just made me feel so loved and definitely gave me that extra push of support whenever I needed it,” Zhang said. “My coach there and my coaches and clubs back home worked non stop to help me improve, whether it be my mental game or physical abilities. My friends always encouraged me and wished me luck.”

Her coach, Lily Yip, for the Youth Olympics had to remind her constantly about the strategy for the upcoming game.

“After Lily lost the fourth game, I told her not to worry, don’t play too safe, work harder and fight,” Yip said in a Palo Alto Online interview.

In a Team USA interview, Zhang describes how it feels to be the first American to win a medal in the Youth Olympics or Olympics for table tennis.

“It feels like a dream honestly, I just can’t put words to describe it because it feels like I’m floating,” Zhang said. “It’s just an amazing honor to be here. Both events are huge, and it’s just really humbling to wear the U.S. flag and go out there and represent my country.”

Zhang’s table tennis career began at the age of seven when she started playing with her father, a former Stanford math professor as well as a former table tennis player from Xi’an. Table tennis was originally just a hobby, however, Zhang’s love and passion for the sport allowed her to flourish and advance. She began going to the India Community Center in Milpitas in order to bring her skills to the professional level, practicing three hours a day, 18 hours a week.

When Zhang wasn’t practicing during the Youth Olympics, she immersed herself in the culture of Nanjing. She felt honored that the people of her home place came to cheer her on. Zhang knows how to speak Mandarin Chinese and used her skills to converse with the villagers and volunteers of the games.
As Zhang is ranked 109 in the world and she often gains gratification from other players that look up to her.

“I’ve gotten a lot of congratulations from many people, but when I hear young kids say they look up to me and want to play like me, it’s honestly a feeling like no other,” Zhang said.

Zhang will come home to attend UC Berkeley, one of the top two schools in table tennis, and plans to major in Psychology. She will continue to practice with the mixed international team as well as prepare for the Rio 2016 Olympics.