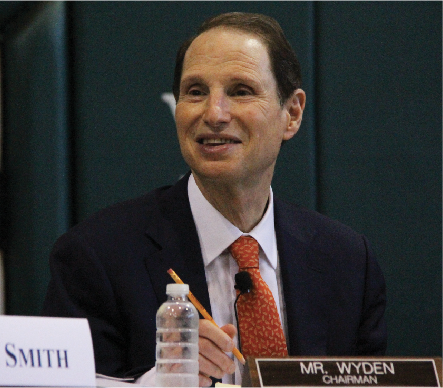 Senator Wyden discusses technology and the safety of its utilization in government.

Oregon Senator of 18 years Ron Wyden visited Palo Alto High School on Wednesday, Oct. 8, to talk with students and the community about issues facing the nation, namely the mass surveillance by the government of the technology industry.

Wyden called a roundtable discussion with technology leaders to discuss a type of surveillance known as “dragnet”, which collects information from all sources on all people, those accused of terrorism as well as law-abiding citizens. Wyden’s collaborators in the roundtable included technology giants from companies such as Google, Facebook and Dropbox, among others. As head of the Senate Finance Committee as well as a member of the Intelligence Committee, Wyden hopes to use his influence to end the practice of dragnet surveillance.

“Silicon Valley, like the Silicon Forest in my home state of Oregon, is the launching pad of the new digital economy,” Wyden said. “In the digital economy, the American Brand merits innovation, open communication, economic opportunity and American value, except when it doesn’t. It’s clear that the global community of internet users doesn’t like to be caught up in the US surveillance dragnet any more than the American people. They’ve embraced American technology, but they don’t like it being turned against them in a way that doesn’t increase anyone’s security.”

“You are entitled to the legal protection [of your information] under our constitution and our laws,” Smith said. “We will not rebuild trust [with foreign consumers] until our own government fundamentally recognizes that moral principle. That’s the reason we absolutely need Congress to [provide reform].”

Before the roundtable, Wyden sat down with Paly publications for an interview on his policies and his time at Paly. The senator voiced his support for a transparent college application process in which colleges publish all information, including their graduation rates, average debt upon graduation and average income for the first few years out of college.

“I’ve introduced a bipartisan bill with Marco Rubio called the ‘Student Right to Know Before You Go Act,’ where for the first time this fall, you’d be able to go online and see a college’s graduation rates, debt levels, amount of remedial education people needed,” Wyden said. “For the first time [you would be able to see] what you would be likely to earn if you got a degree at a particular school. What I like about this, is that [it is] not only arming people with information, but I think generally, college has been one of the few big purchases we make that has been pretty much impregnable in terms of economic forces… Clearly people have a right to this information.”

Wyden is a member of Paly’s graduating class of 1967, and while a student here he played basketball for all four years. After graduation he attended the University of California at Santa Barbara for two years before transferring to Stanford University. Upon his completion of law school at the University of Oregon, Wyden remained in state and became a US congressman before winning the race for senator in 1996.

As part of his return to Paly, the senator also arranged for his old basketball coach, Clem Wiser, who at over 90-years-old still holds the title of the winningest basketball coach in Paly’s history. Wiser had coached at Paly for more than twenty years.

“Coach Wiser is simply the gold standard for teaching basketball players on and off the court,” Wyden said.