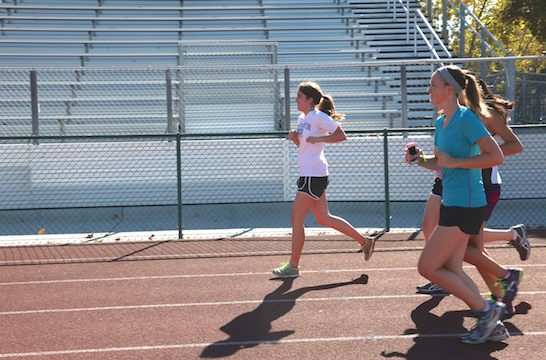 The cross country girls run on the track at practice to prepare for an upcoming meet.

Cross country does well at invitational

The girls cross country team is especially happy with the outcome of their last meet, the Stanford Invitational meet.

“We finished in the middle of the pack,” girls cross country coach Paul Jones said.

Sophomore runner Maddie Feldmeier is doing well this season and has shown her running capabilities in the first few meets. Junior Bryn Carlson, has also been doing well even though she recently came off a cold.Varsity runners Katie Foug, Sarah Wang and Ariana Tindel are noteworthy runners from past meets and continue to do well at the recent cross country meets.

The boys, on the other hand, are not doing as well, mostly because some runners are recovering from recent injuries.

“We could be doing a lot better, we just have a few injuries of our best and overall our team is almost at full strength,” junior runner Josh Yuen said. “Our key runners are the ones that are [injured] so we’re asking out freshman runners to step up.”

Lucas Matison, another captain, has just returned from the world mountain running competition in Italy.

According to boys cross country senior captain Matthew Solway, the team is trying to keep injuries to a minimum to ensure that all runners can perform their best at meets and practices. Freshman runners Reed Foster and Sam Craig are two of the faster runners on the cross country team and are helping the team perform well at meets.

The next meet is at Toro Park in Salinas on Friday, Oct. 17.