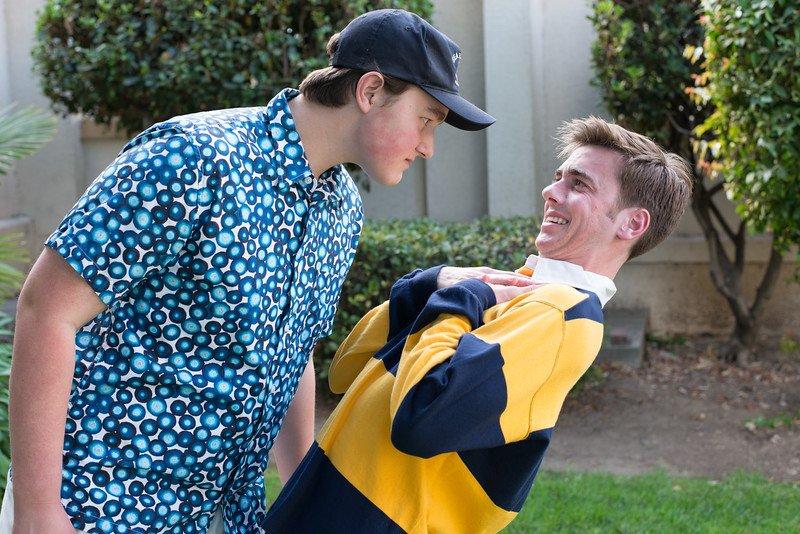 Paly theater students Oskar Soderberg and Will Kast perfect their roles while practicing their scene from “Server of Two Masters”.

The Palo Alto High School Theatre program is kicking off the year with two madcap comedy plays, “The Stinky Cheese Man” and “Server of Two Masters”.

“All of the shows she picked feature really comical, wacky characters and plots that will definitely make audiences laugh,” senior Helen Nguyen said.

“It is a show with singing and a little bit of dance,” Kienitz said. “It should be very funny and wacky. I’m very excited to see it.”

“The Stinky Cheese Man” will also have lots of audience interaction and humor for people of all ages.  The play has a very diverse cast which makes it very enjoyable experience.

“The cast is filled with students from all grades and they are all incredibly talented and hilarious,” Kinetz said. “They all have great physicalization in their characters and have developed wonderful voices for their characters.”

The other show the theatre is performing is “Server of Two Masters”, a modern adaptation of a classic Italian play called “Servant of Two Masters.” Director Tony Kienitz adapted the play so the plot, the characters and the humor all relate to Silicon Valley.

“All of the jokes that are made in the show specifically target funny things about Palo Alto, so I think people in the area who come to see the show will really enjoy it,” Nguyen said.

“One of the roles, Beatrice, is double casted with seniors Riley Cassidy and Cara Kienitz alternating playing the character,” Nguyen said. “Not only does it give both of them to play the character, but it makes the show a different experience every time, which helps add to the comedy and fun of it.”

People who are interested in attending can purchase tickets at palytheatre.com beginning in late October. Tickets for “Server of Two Masters” are $7 for students and $10 for adults and will also be available at the door.