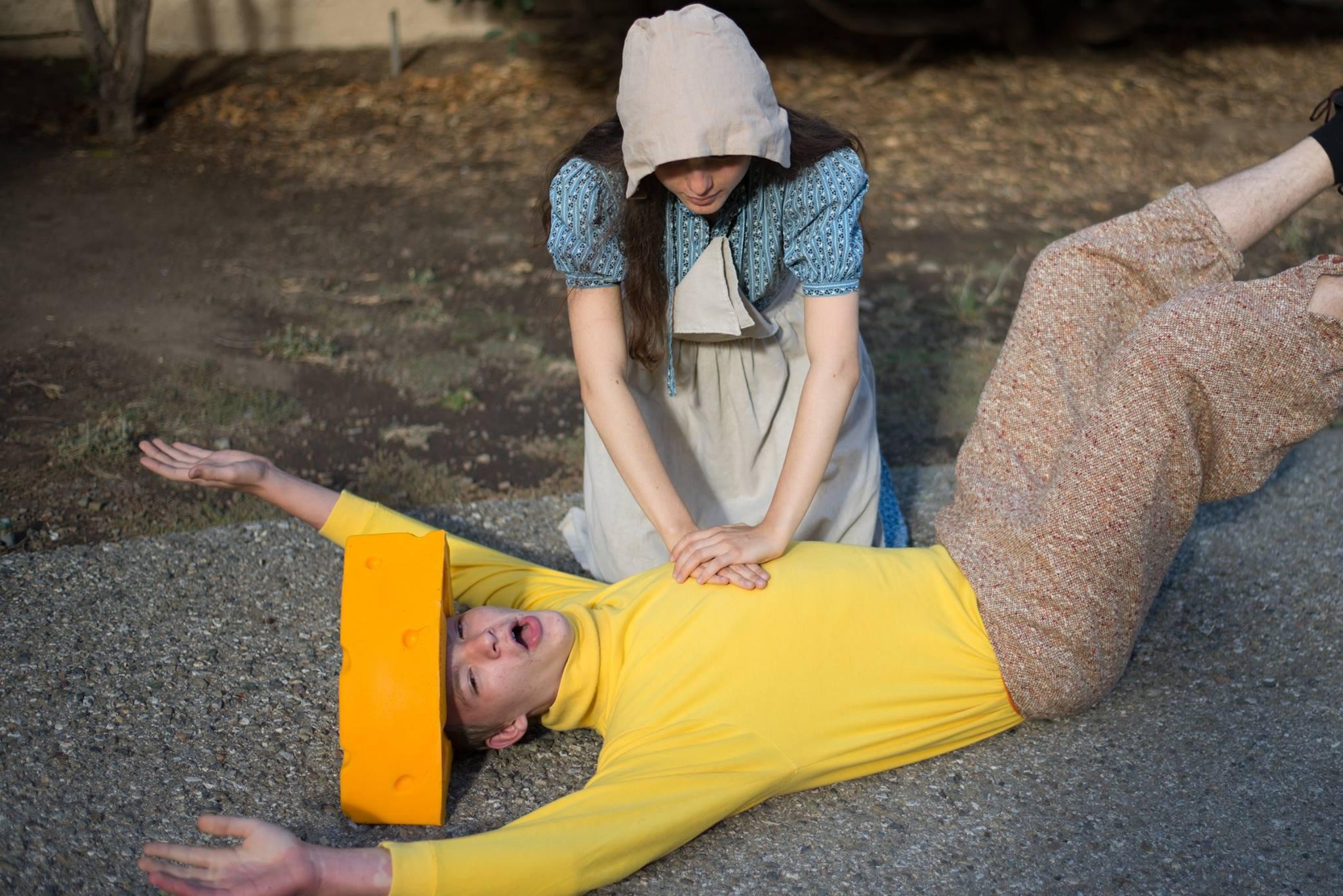 Stinky Cheese Man, played by Daniel Cottrell, is saved during a scene in the play.

The most recent Palo Alto High School theater department production, “The Stinky Cheese Man and Other Fairly Stupid Tales,” is a great play for a young audience it aims for, yet leaves something to be desired for those accompanying a child.

The play, which is based on the children’s’ book of the same name, features a novel take on classic fairy tales. Most of the stories chosen do not have happy endings and make fun of fairy tales for their unrealistic view of the world.

Although most of the comedy is directed at a young audience with slapstick humor as well a fair amount of flatulence jokes, there are some humoristic elements that play on sexual innuendo that is mostly for an older audience. The high pitched voices, however appealing they are for a young kid, make the show almost impossible to watch without getting a headache, and even harder to understand at some points.

Sophomore Daniel Cottrell, the lead role, uses  his talent in ballet for some incredible entrances and exits from the stage.

Another lead, sophomore Peter Maroulis, plays Foxy Loxy, the part-time narrator and role in one of the sub-plot stories. Maroulis is able to make an entertaining character out of the fox, humorously attempting to eat different characters in stages throughout the play.

The full-time narrator, Jack from “Jack and the Beanstalk”, is played by sophomore Jackson Kienitz. Kienitz’s character is able to weave the play into one unified storyline instead of a conglomerate of seemingly unrelated stories. Kienitz’s character also shares a love affair with another character, a plot point sure to interest those in all age groups.

The play features stunning visual effects which are incredibly well done by the production crews. An especially well-orchestrated visual effect exists in the rewind idea, in which flickering lights and characters moving backwards simulates a rewind on an old-timey television set.

Director Tony Kienitz and wife Tanna Herr (producer) are a local couple and founders of A Theatre Near U, a Palo Alto theatre company. Both are able to implement off-script acting and a visually appealing set to their advantage, doing so excellently.

The Stinky Cheese Man ran for two days in the Paly Theater, on Saturday, Oct. 4 and on Sunday, Oct. 5.

The next production by the is Server of Two Masters, which will have its first show on Thursday, Nov. 13.