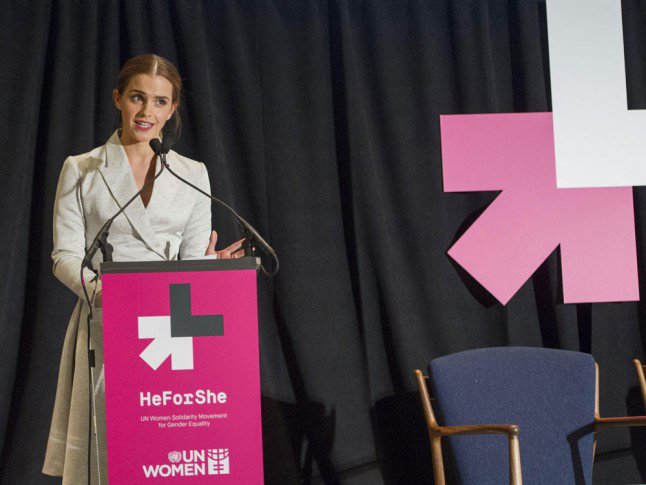 Emma Watson spoke about feminism on Sept. 20, beginning an uproar on the Internet over the new UN campaign HeForShe.

HeForShe is a solitary gender equality movement calling for both men and women to come together to face human rights issues and end gender-based discrimination.

On Saturday, Sept. 20, acclaimed model and actress Emma Watson gave a speech as the United Nations (U.N.) Women Goodwill Ambassador where she launched this campaign.

Watson’s main focus was that achieving gender equality is impossible when only one sex is participating.

Watson opened her speech with the misinterpretation of the word “feminist.”

“I was appointed six months ago and the more I have spoken about feminism the more I have realized that fighting for women’s rights has too often become synonymous with man-hating,” Watson said.

Many times when the idea of feminism is brought up into conversation, many immediately assume that it is the belief that women are better than men and therefore dismiss it, calling it too radical, crazy and overly aggressive.

Though some extremists who identify as feminist have put this idea out there, their beliefs do not follow the true idea of feminism. Watson clears up this misconception by defining the word as “the belief that men and women should have equal rights and opportunities. It is the theory of the political, economic and social equality of the sexes.”

Watson goes on to discuss the gender inequality she has seen and dealt with, starting from age 8, and how these events have caused her to identify as a feminist, despite the stigma associated with the term.

Watson states in her speech that she has realized that she is a feminist because of her basic beliefs in women’s rights and states that many are unaware that their beliefs match with the definition of feminism, because the word has come to be perceived as unfavorable.

Feminism does not state that women are the only ones facing discrimination, but in fact calls for the equality of all genders.

Watson points out that the reason the gender equality movement has made little progress through history is because only half the population has been fighting.

“How can we effect change in the world when only half of it is invited or being welcomed to participate in the conversation?” Watson said.

Watson continues to point out that men, just like women, are pressured to be a certain way in order to fit into their assigned gender roles. Because of this men are needed in the movement to end gender inequality.  Men and women’s assigned roles are often linked and in order to dissolve one, a society must dissolve its counterpart.

In her speech, Watson “extend[s] [her] formal invitation” to all men to join the HeForShe movement to battle gender-based discrimination and stereotype.

Proceeding Watson’s speech, many famous males went public with their support. Men including Harry Styles, Logan Lerman, Chris Colfer, Nigel Barker and Tom Hiddleston all tweeted a picture of themselves with the hashtag “#HeForShe.”

Headlines regarding the news of Watson’s promotion of the HeForShe to the UN consisted of words like “game-changing”, “powerful” and “excellent.”

Though her speech did stir an uproar of positive feedback, there were some things that her speech lacked. Watson excluded many other factors that have to do with the feminist movement such as race, economic backgrounds and gender identities. In fact, the very title of the movement causes issues for not everyone uses the pronouns “he” or “she.”

“HeForShe is problematic, no matter how you slice it,” Amy McCarthy from Huffington Post said.  “Some may call these criticisms divisive and nitpicky, but there is nothing feminist about a campaign that reinforces a gender binary that is harmful to people whose gender identities don’t fit into such tidy boxes.”

McCarthy also said that although Watson had good intentions, her speech gave the idea that women need men to obtain human rights.

“Women don’t need to be rescued, whether it’s by men, Emma Watson, or the United Nations,” McCarthy said. “Positioning men as the saviors of oppressed women isn’t productive, and devalues the work that feminists have been doing for decades.”

The HeForShe movement that Watson promoted told the world that the true meaning of feminism does not involve man-hating of any kind and the importance of all people to be included in reaching gender equality.