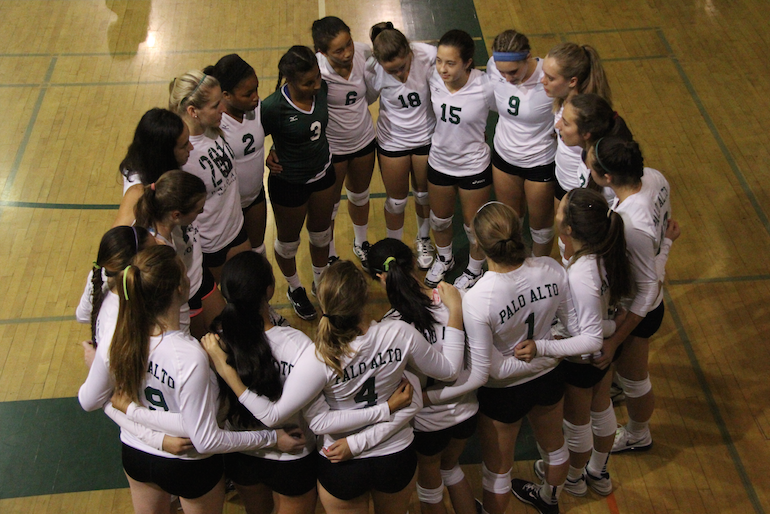 The varsity girls volleyball team huddles up to encourage each other before playing their match against Homestead High School.

Volleyball redeems itself despite losses

“You win some, you lose some,” senior Jade Schoenberger said. “Every great team has its ups and downs and at the end of the day both teams out played ours. [Losing] just helps us notice our mistakes early and hopefully we will get them next time.”

“[Although] we lost our first two matches, I think we are all still getting used to the transition of a new coach, and we will still be successful this season,” junior Clara Chiu said.

“I think having the win over Monta Vista really got us back in the groove of things,” Schoenberger said. “It was a rough first week of league but the Monta Vista game and this tournament win will give us a good confidence boost into the upcoming week.”

The volleyball team has been working hard to improve their skills, and continue the upwards momentum they just gained.

“We have been working really hard in practice and I know my teammates and I have been putting in a lot of effort to become better players and also a more cohesive team,” senior Molly Fogarty said. “After our first two losses in league, we went back to practice more hungry for a win, so we have been working hard and it has been paying off.”

Senior Charlene Zhu said that a key element to the volleyball team’s recovery was their coach, Daniele Desiderio.

“He didn’t get mad at us for losing,” Zhu said. “Instead he told us that believes in us and that he knows we are a good team.”

Also, team members attribute their ability to bounce back from the losses to great team chemistry both on and off the court.

“Everyone on the team has so much to bring to the game, this sport and it’s really nice to be able to share our obvious passion: volleyball,”  junior Gabrielle Bains said. “I believe that this team can take our wins farther and become an even stronger team.”

The Lady Vikes will play against Mountain View High School on Oct. 14 next.