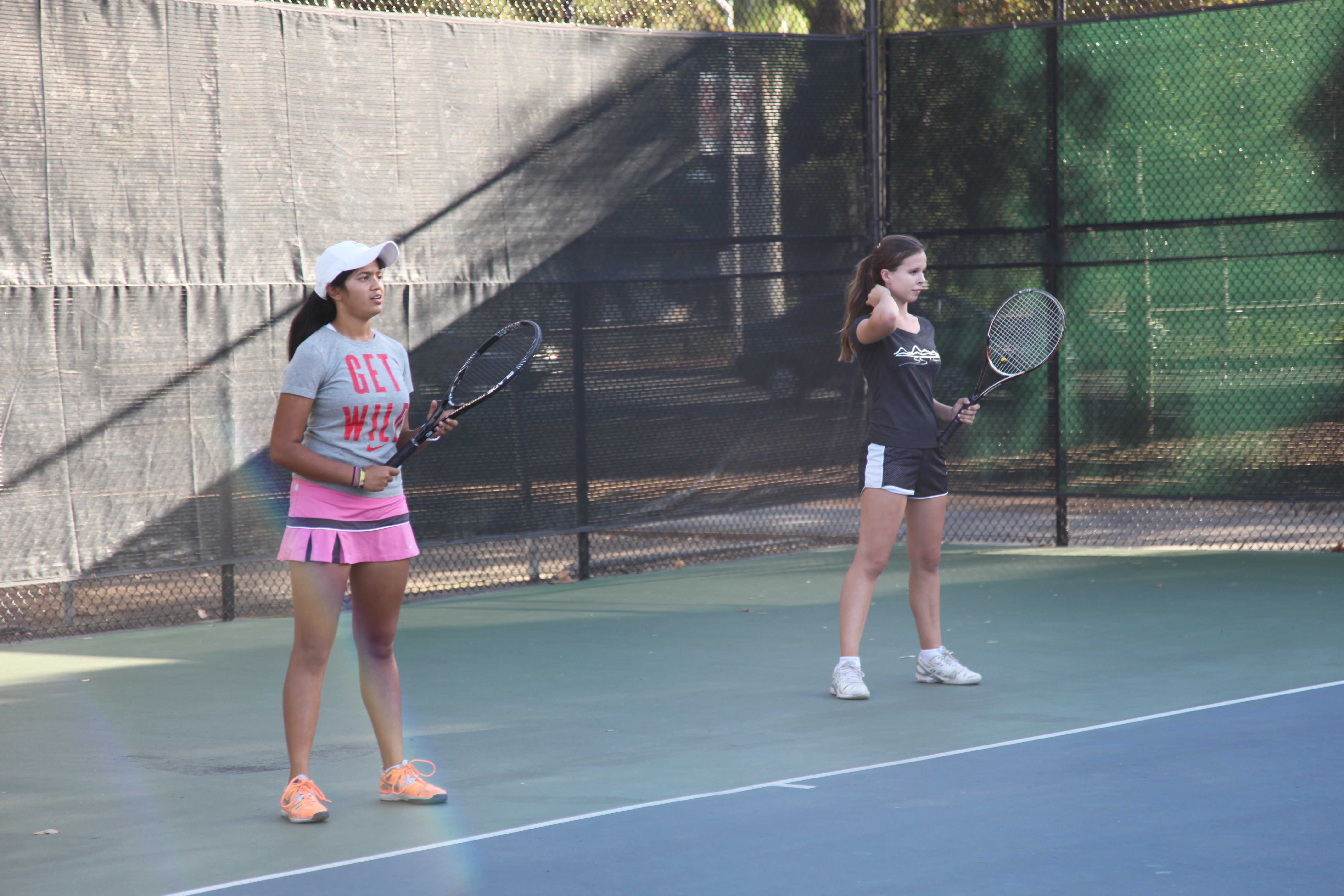 The girls tennis team kept its undefeated streak as its season came to an end.
Palo Alto High School’s girls tennis team has yet to lose a league match. In recent matches against Henry M. Gunn High School and Cupertino High School on Oct. 29 and Oct. 30, respectively, the Lady Vikes won with an end score of 5-2 for both matches.
Since the beginning of the season, the team looked forward to participating in the two large league championships, the Santa Clara Valley Athletic League (SCVAL) Championships and the Central Coast Section (CCS) Championships. In the El Camino League this year, one league down from its previous De Anza League, the Lady Vikes thought that they would be able to pull off a win at SCVAL Championships this season.
For tennis, unlike other sports, SCVAL Championships is an individual, single-round elimination tournament. The SCVAL championships took place on both Nov. 4 and Nov. 5 at Mountain View High School. The second day of the SCVAL chapionships, sophomore Avanika Narayan placed second in singles, while junior Halle Biorn and senior Madeline Lee placed fourth in doubles. Neither freshman singles player Jacqueline Cai nor doubles partners sophomore Meredith Cummings and freshman Mailinh Truong were able to place.
The CCS championships were held at Paly courts on Nov. 11 and 12. Unlike the SCVAL championships, the CCS Championships included teams from both the De Anza and El Camino Leagues. The girls tennis team has been in the lower league  its entire season, so several of the players acknowledged that CCS would be challenging
“CCS will definitely be difficult because we will be playing teams in the upper league,” Biorn said prior to the match.
Unfortunately, the Lady Vikes fell to the Carmel High School Padres during the first round of CCS and were unable to move on.
“For CCS, we anticipated playing teams that we hadn’t come up against during the regular season,” Lee said. “While this was daunting, I am confident that we competed and performed to the best of our abilities. There have been so many times throughout the season where everyone has been down the first set but has been able to come back and win in the end. This competitiveness and tenacity is exactly what we tried to emulate at our first CCS match.”
The graduating senior team members feel confident about the upcoming year’s team despite the fact that it will be losing five seniors.
“Next year, [Coach Andy Harader] plans to move the team back up a league,” Fox said. “Although the team is losing a lot of players, I am confident that the team will step up to the challenge of playing in the top league again.”
Lee, one of the team captains, is leaving the team with a positive outlook for the returning members.
“We went undefeated in the league season and I’m incredibly proud of our team,” Lee said. “So many of our players are young this year and it has been great to see them rise to the challenge and compete. I have high hopes for them next season.”
Overall, the girls tennis team concluded its season as El Camino League champions.