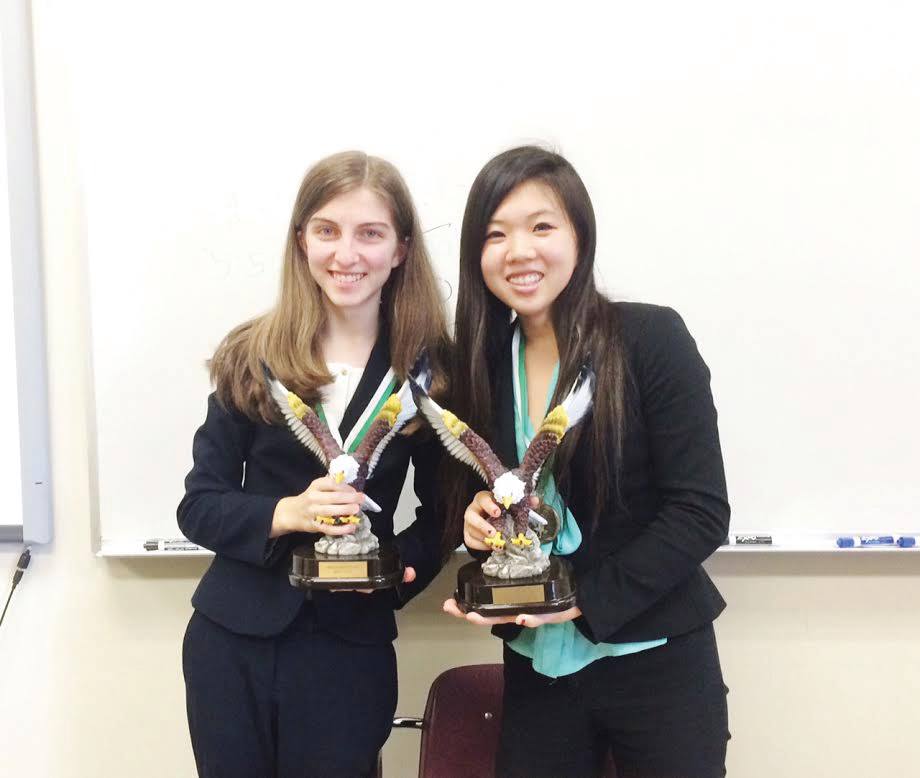 Junior Anna Lu poses with her final opponent after winning the varisty Lincoln-Douglas debate division at the Harker Invitational Tournament .

Paly’s team had multiple successes, one of which included a win in the varsity debate division. Multiple Paly students participated in the Varsity Lincoln-Douglas debate. All debaters competed in five preliminary rounds, each of which had one judge to decide a winner. The top 16 debaters made it to the elimination rounds; there, the debater with the most votes won the round and advanced.

The Lincoln-Douglas debate topic for the University of Pacific tournament was “Resolved: A just society ought to presume consent for organ procurement from the deceased.” The topics often change every two months.

Junior Anna Lu placed first in the Varsity Lincoln-Douglas debate. Lu went through multiple rounds before finding out the results of her round.
“The elimination rounds were particularly stressful because all of my rounds were decided on split decisions, so out of a panel of three, two judges voted for me and one for my opponent,” Lu said. “In the final round, they actually didn’t announce the decision so that there would be suspense during the award ceremony, when we actually found out who won. That was terrifying because I had to wait for the award ceremony to start two hours after my final round knowing that it was really close.”

According to sophomore Ethan Teo, publicity manager for Paly’s Speech and Debate Team, the team focuses on mostly one particular form of debate.
“Paly’s team does a lot of variety in speech, but focuses on Lincoln-Douglas debate, which has a particular format that is a morals and values-based and also one-on-one [style] debate,” Teo said.

After Lu found out she had won the entire Varsity Lincoln-Douglas debate division, she felt that in addition to her previous performances, this tournament held great significance for her career.

“This was the second tournament that I won this year out of the three that I’ve attended so far so that was really exciting and unexpected,” Lu said. “Finding out on stage that I won the tournament was by far the best moment I’ve had throughout my debate career.”

Other significant successes included sophomores Candace Wang and Eric Foster, both of whom made it to the quarterfinals in Lincoln-Douglas, and junior Gabi Rossner who made it to octafinals.

Junior Jenny Xin won first place and Rossner placed third in the Novice Original Prose and Poetry, a speech event where contestants write an original piece, memorize it and ultimately present it. Senior Will Robertson was a semifinalist in the Varsity Extemporaneous Speaking Event.
Another tournament with a successful outcome for Paly’s Speech and Debate Team was the Harker Lincoln-Douglas Invitational that took place from Nov. 14 to Nov. 16 at the Harker Upper School.

The University of the Pacific Invitational and the Harker Lincoln-Douglas Invitational were both additions to the great success Paly’s Speech and Debate team has been experiencing in recent years.