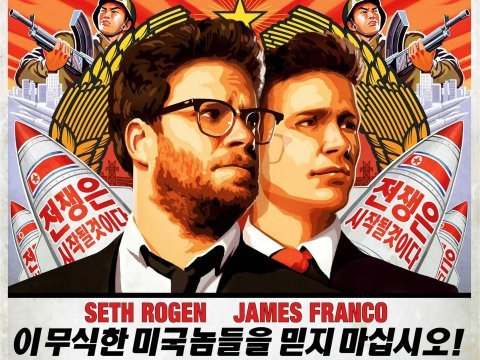 “The Interview” comedy fails to entertain with predictable plot

How did America get to the point where people look to movies like “The Interview” for entertainment? The action comedy movie, directed by Evan Goldberg and Seth Rogen, has been mired in controversy recently. But aside from the crude humor, there is not much else to praise.

First off, the movie’s plot was extremely predictable and overused; the government plans an assassination with amateur undercover agents, the agents screw up the plan, but end up completing the assassination regardless.

The press does not help either by making the movie even more predictable. With reports on every other channel about North Korea’s supposed hacking of Sony, Kim Jong Un’s threats of “merciless” retaliation against the movie, the cancellation of the movie’s release and it’s actual release, spoilers of the movie are constantly being broadcasted.

Also, this movie is the same as most other movies Rogen directs and James Franco and Rogen costar in. It includes the same old crude humor, ridiculous plot and uninspiring characters as in “This Is the End”, Franco and Rogen’s last movie together that was also directed by Rogen and Goldberg.

That is not to say that the continuous sexual, racial jokes in the movie are not at times funny, but a new and different comedy from Rogen is well overdue.

“The Interview” features subpar acting, further contributing to its poor quality. Of all the characters, Dave Skylark, the interviewer given the job to kill the president of North Korea, played by Franco, had the best acting.

Even then, most of his acting in the movie consisted of silly facial expressions or unnecessary over exaggerations, which any non-actor could achieve as well.

The acting in the movie was extremely basic; there was nothing difficult to act out or impressive to watch, just Franco cuddling with dogs, cringing his face, excessively shouting, throwing around fake fruits and exaggeratedly mouthing words.

The poor acting may be a result of the one dimensional characters. Dave Skylark is an arrogant, obnoxious interviewer who is actually childish and immature on the inside. Aaron Rappaport is the producer of a celebrity tabloid show who simply wants to be recognized as an actual news reporter. Kim Jong Un, the character, is the president of North Korea who is ruthless on the outside, but fragile on the inside; he admits to feeling pressured by his family and isolated for liking Katy Perry and Margaritas.

The characters are so shallow and boring that the actors must count on ridiculous acting and humor to make the movie amusing.

Overall, the movie was not as great as the hype made it out to be. The plot was cliche and boring, the acting was elementary and Rogen needs to step up his game.

Other than somewhat funny crude humor, the only interesting aspect of the movie is the controversy surrounding it.

After the Sony hacking, Kim Jong Un’s spokesman responded to the movie by calling it “an act of war” and “[an] act of terror”. The silly portrayal of Kim Jong Un provoked the North Korean leader..

Was releasing the movie really worth it despite the tensions between America and North Korea? No. The movie does not benefit viewers or anyone else. In fact, it probably causes the loss of brain cells.