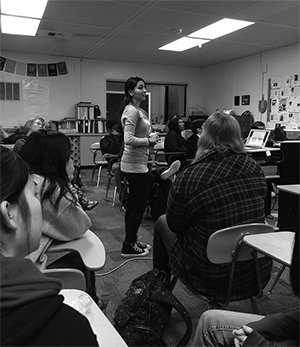 Alumna Gunita Singh explains factory farming to a Paly Living Skills class to raise awareness about its effects on the environment.

Advantages of adopting a vegan diet

Cages lined up as far as the eye can see. The balking of hens echoes throughout a barn. Hens crammed together with barely enough room to turn around. Cows and pigs who have never once seen the light of day. At age fourteen, a high school student realized one of the many reasons she would no longer support the factory farming industry. For Palo Alto High School alumna, Gunita Singh, being vegan is a chance to live out her ethics and heal the planet.

The negative aspects of factory farming led Singh to make the switch to vegetarianism.

“I first became vegetarian when I was a sophomore in high school,” Singh said. “I joined the animal rights club at my school and for the first time learned about the sheer horrors that take place on factory farms.”

Prior to moving to Palo Alto for her junior year of high school, Singh lived in New York City, where she became a vegetarian. The myriad of vegetarian food options that was available in this part of the country excited her.

“I was so excited [to move to Palo Alto] because the Bay Area truly is the Mecca of vegetarian food,” Singh said. “Places like Herbivore and Gracias Madre in San Francisco to Lyfe Kitchen right in Palo Alto have hearty, delicious and nutritious vegan options that I would recommend to devout vegans and meat-eaters alike.”

Her transition to veganism began in June 2012.

“One day it clicked for me that dairy and eggs come from the same place that meat comes from,” Singh said. “I learned that nearly all egg production facilities practice what is called ‘maceration’ — grinding up male baby chicks or suffocating them to death because male chicks are useless in the egg industry. I was shocked and knew I couldn’t support that.”

Singh emphasizes the additional benefits, aside from sparing the lives of farm animals across the country, that veganism has to offer.

“I also learned that industrialized factory farming is the number one cause of global climate change — that is — animal agriculture accounts for more greenhouse gases than the entire world’s transportation sector,” Singh said. “Factory farming isn’t only cruel to animals, but it is destroying our planet; by reducing or eliminating our consumption of animal products, we’re not only choosing compassion over cruelty, but we are taking tangible steps toward mitigating global warming.”

Singh explains that going vegan is one of the best ways to be a direct agent of change by reducing animals’ suffering and curbing climate change.

“Amending our diets is a proven, effective way to create a better world,” Singh said.

Singh suggests a consistent and gradual transition to prevent relapses to prior dietary habits. For those concerned about protein intake, Singh provides a variety of nutritional options.

“There are so many places to get protein: legumes, dark leafy greens, beans, nuts, lentils — my favorite — tofu,” Singh said. “These are lean protein options, so they are actually a lot better for you than animal protein.”

Many who are unsure of becoming vegan are concerned about potential negative impacts the diet could have on their athletic pursuits. Singh references her friend, David Carter, an NFL defensive lineman who plays for the Jacksonville Jaguars. When David switched to veganism, all his small injuries from playing football such as tendonitis, arthritis and muscle fatigue in his right arm all went away, according to an interview done by Plant Built.

“Even if you’re super athletic, it’s more than possible to get the nutrients you need to live an active life through plant-based foods,” Singh said.

Singh explained that becoming vegan is not an all-or-nothing pursuit.

“By participating in Meatless Mondays, being ‘vegan till 6’ or even changing your diet in increments, you are pursuing a path that is best for you while keeping in mind the ultimate goal of improving your health, saving animals and helping the planet—and that is awesome!” Singh said.

Gunita Singh continues to work with animal-friendly organizations such as Hampton Creek, Mercy for Animals, the Factory Farm Coalition, The Humane League of the United States and Vegan Outreach. There are vegan substitutes for many foods. Gunita Singh recommends visiting chooseveg.com for more resources on becoming vegan.  In addition to visiting the website, students can visit an Animal Rights Club meeting.