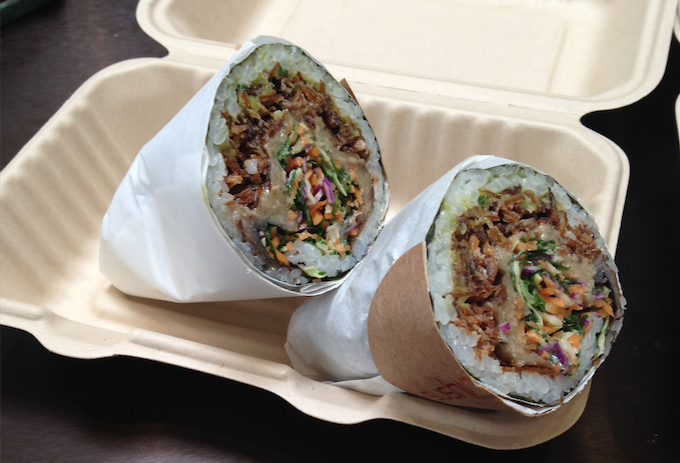 Sushirrito, a restaurant that serves fusion sushi burritos, recently opened a new in downtown Palo Alto in order to cater to the heart of Silicon Valley. The popular chain has three restaurants in San Francisco and was started out of a need for a convenient and cheap alternative to sushi.

The new eatery is located between Chantal Guillon and Umami Burger at 448 University Ave., in a space previously occupied by Sabrosa Taqueria. Inside the restaurant is modest seating and a food bar where employees build your Sushirrito to order.

Sushirrito is the brainchild of Peter Yen, who teamed up with Ty Mahler to create the eclectic combinations of flavors for their Sushirritos. They opened their first store in San Francisco South of Market Street in 2011 and opened more stores soon after in the Financial District.

A Sushirrito is exactly what one might    expect. Its essentially a giant sushi roll, not wrapped in a tortilla, but in nori or seaweed. While they are not quite as large as the colossal Chipotle burritos, Sushirritos are still quite large and are just as satisfying. Sushirritos are inspired by Asian and Latin ingredients and each one has a long list of fillings to provide a variety of flavors and textures.

The store sells eight different Sushirritos, along with salads and nachos. Keeping with the burrito theme, Sushirritos are wrapped in paper to allow for a somewhat mess-free eating experience. A common problem while eating was dealing with the seaweed paper falling apart, causing the roll to lose its shape. As Sushirritos range from $9 to $13, here are some recommendations before you decide to take the leap. Sushirrito is open Monday through Saturday, from 11 a.m. to 3 p.m.

Sushirrito’s most popular roll, Geisha’s Kiss is generously stuffed with Yellowfin Tuna sashimi. Inside the roll there is also Tamago, a Japanese layered omelet and Yuzu Tobiko, a fish roe flavored with citrus. Although these ingredients were somewhat muddled by the great amount of sesame white soy sauce that was put into the roll. The Namasu cucumbers gave the roll a nice sweet and sour component, while the Piquillo peppers gave it a little spice. However, the lotus chips stole the show in this sushirrito, lending a nice crunch to offset the textures of the other soft ingredients. The avocado and butter lettuce freshened up the entire roll, making it seem lighter than it really was. Overall, it was a nice roll, albeit somewhat complicated.

The Buddha’s Belly is a flavorful vegetarian Sushiritto for those seeking to avoid eating meat. The eggplant, one of the main components of the roll, paired well with the numerous other ingredients. It was slightly spicy, which was very noticeable while eating the roll. The portobello mushroom fries gave the roll a nice meaty bite, and more body, while the carrots and kale gave the roll a nice freshness and crunch, giving the roll a pleasant texture. This roll also had a very peculiar sauce, made from tofu and roasted garlic. However, this sauce worked well in combination with the other flavors, giving the entire roll a nice flavorful finish. The sauce also worked well together with the avocado to give the entire roll some much needed richness. This Sushirrito felt much lighter than the other rolls available, yet it was still very satisfying because of the mushrooms and eggplant.

The Sumo Crunch is a good option if you are not a fan of raw fish. Inside the roll there are shrimp tempura, surimi crab, shaved cabbage, cucumber and avocado. The roll is rolled in red tempura flakes, giving the roll a bright red tone reminiscent of Flamin’ Hot Cheetos. The surimi crab, or imitation crab, was nothing special, but took up most of the roll. So, if you are not too keen on ambiguous ground seafood, choose a different roll.  However, the cabbage and cucumber gave the roll a nice crunch, while the avocado gave the roll a creamy finish. Once again, the sauce that was not particularly appealing. It was a Sriracha mayonnaise, and while the combination was not bad, it was unnecessary in the roll.

As the name implies, this roll is full of pork, for the carnivore. Inside this roll, there were nice big chunks of pork. The pork was not too fatty but not too lean and although the pork was slightly dry, it was nicely seasoned. Meanwhile, the mustard seed mayo that accompanied it gave the roll a mild kick but did not overpower the rest of the ingredients. There were also fresh ingredients in the form of shredded cabbage and shredded red radish. Once again, there was also avocado, which seems to appear in most of the rolls. However, there was also cilantro in the roll, which gave the roll a nice herbaceous finish.