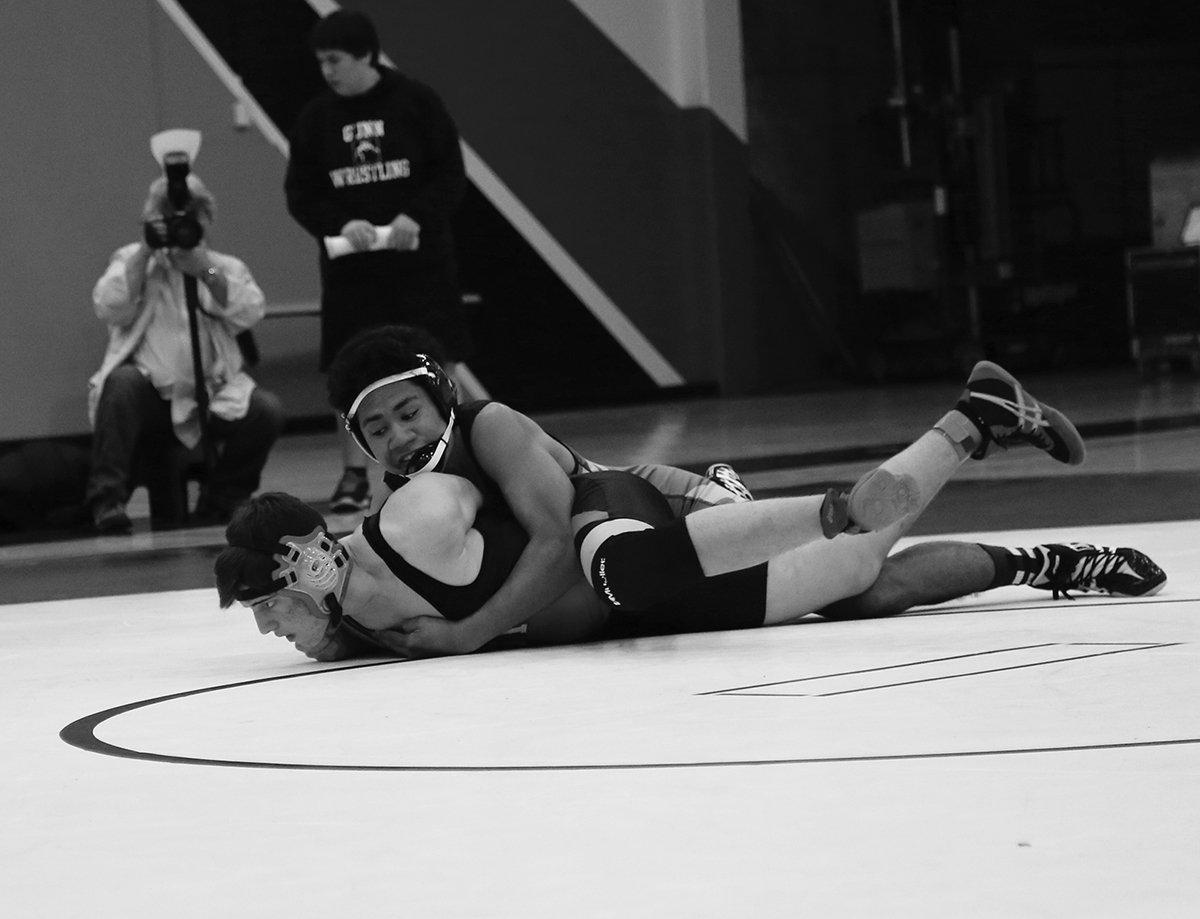 Junior Emil Wolfgramm tackles an opponent at an away match, earlier this season.

The first one is against Wilcox High School on Feb. 5. The last one, which is also the night of its senior night, will be on Feb. 10.

Coach Braumon Creighton does not have high hopes for the team regarding the the upcoming duel against Wilcox.

“I expect us to lose the duel, but I do expect us to win some matches on the mat,” Creighton said. “I’m looking forward to Chioke Bryant-Anderson’s key matchup against a highly ranked CCS [Central Coast Section] guy, and that is really the marquee match of the night.” Recently, the team competed against cross-town rival Gunn High School (Gunn), resulting in a victory.

“The Gunn duel was good,” Creighton said. “Wrestling is never easy, but we showed a superior skill set on our feet, and we were better than them in the take down. Also, our new wrestlers know more than their new wrestlers [did].”

The Gunn duel also resulted in a couple of big wins for some of the new wrestlers on the team, as well as for the returning wrestlers. Senior James Giaccia expected that the team would defeat Gunn.

“Going in I thought we had a good shot,” Giaccia said. “We matched up well against them,”

Unfortunately, the team faced a disappointing match up while at the Mid-California Championship (Mid-Cal) on Jan. 23 and 24.

Only a select few wrestlers were chosen to compete at this tournament since the Mid-Cal tournament features some of the best high school wrestlers in California.

“It was a really tough tournament,” Creighton said. “Seth [Goyal] didn’t make weights which was really hard and sort of put a damper on the whole vibe of the program that day. We didn’t wrestle our best and we didn’t perform.”

Giaccia mirrors Creighton’s opinion on the Mid-Cal Tournament but also adds a positive light to the loss.

“Mid-Cal was tough,” Giaccia said. “We didn’t bring many people, but we wrestled hard and got some great matches with the best wrestlers in the state.”

As the wrestling season is soon coming to an end, Coach Creighton generally believes it was a successful season and is excited fot easy for what the young athletes are going to bring.

“I feel good about the season,” Coach Creighton said. “I know what I’m working with and there’s definitely been some ups and down, but for the kids we’ve retained they’re definitely learning wrestling and they’re getting stronger as well as getting more resilient which is something that the whole community needs.”