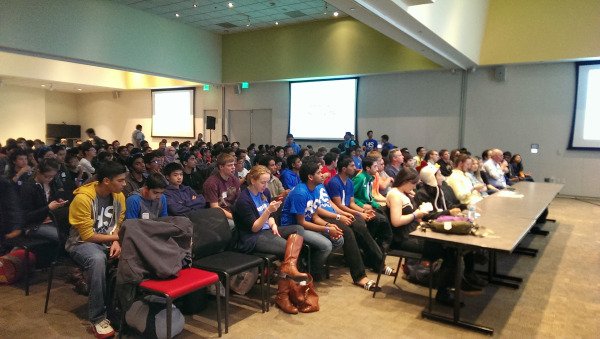 Many young, aspiring hackers wait patiently for the final round of judging to begin.

A lot can be done in 24 hours over the weekend. In that time, students could catch up on much-needed sleep, finish all our homework for the weekend, kick back or watch Netflix with friends or maybe even fit in some time to finally clean your room.

However, a small group of seniors free up select weekends to participate in hackathons. A hackathon is an event where people who like to code or who have brilliant ideas come together. People form teams of four or five people and spend the next 24 to 36 hours developing and creating a web application. A panel of judges chooses the best application to award prizes to the winning teams at the event.

Seniors Rudra Aiyar, Rolina Wu, Elnathan Au and Sonthaya Visuthikraisee attended their last hackathon at High School Hacks in San Jose on Feb 7 and 8. After 24 hours of coding and collaborating, their team placed third and attracted the attention of Make School, a coding school. The team has been invited to attend their program over the summer to improve and refine their coding skills for the future.

So what is a hackathon? If you are like me, you are probably wondering how this whole thing works. I asked Aiyar to walk me through a typical hackathon weekend, and she responded with the following:

“To prepare for the long weekend ahead of me, I sleep at 6:00 p.m. on Friday,” Aiyar said. “On Saturday morning I check in with my team at 8:00 a.m. then go to the opening ceremony, which goes until 9:00 a.m. or maybe 10:30 a.m. You have guest speakers during that time and they explain the rules and everything. At around 11:00 a.m. you’ll start planning your app and hacking. After lunch you basically just continue hacking until however long you can go into the middle of the night.

They will give you dinner and midnight snacks and desserts and all that. All throughout the night, you take naps if you can, and then the next morning around 1 p.m. you stop hacking and go into this thing called a pitch and basically you’re being judged by a small panel. From there, they select the best ones and the process repeats itself until they announce the winners. Then there’s a closing ceremony and you get prizes.”

Aiyar sparked the trend among her friends in the beginning of 2015. She began competing in her sophomore year after her mother pushed her to go and attend to event.

“I attended my first hackathon basically because my mom forced me to go, but I later realized that it’s really fun,” Aiyar said. “At first I was really scared because I didn’t have much coding experience and I didn’t know anyone there, but I learned a lot and got to meet a ton of really smart people.”

After her first three hackathons, Aiyar decided to invite her own friends from Palo Alto High School to form a team beforehand instead of scouting for team members on site. She brought Au and Wu to participate in their first hackathon at Hack Generation Y on Jan 24. Wu has found a new interest in coding and spoke to me about her favorite aspects of hackathons.

“My favorite part about hackathons is that you have concentrated time period to really focus on just coding,” Wu said. “The long time-periods hackathons help boost our efficiency so we can get a lot of work done.

Coding throughout the night may sound incredibly difficult and boring, but Au told me that the food provided is usually great and is able to get him through the night.

“The food is usually good,” Au said. “But it really depends on how many sponsors the event has and how big the sponsors are. If there’s a big sponsor like Intel, then you know there will be a lot of food and the food will be good, but if it’s just a bunch of small start up companies, then [the food] won’t be as good. It also really sucks when they run out of food.”

Au encourages everyone to try hacking, even those who have little to no coding experience to attend a hackathon.

“I went to my first hackathon already knowing Java and Python, but there are always mentors, other teams and people from the sponsors who are usually standing around,” Au said. “They’re always more than happy to help you on your app, so you’re never really alone. Also, there are lots of online resources you can use there. I learned Objective-C at the hackathon and I had no idea what it was before.” With the past several hackathons successfully under their belt, the team is confident that they will have an even better result in in their next event in March.