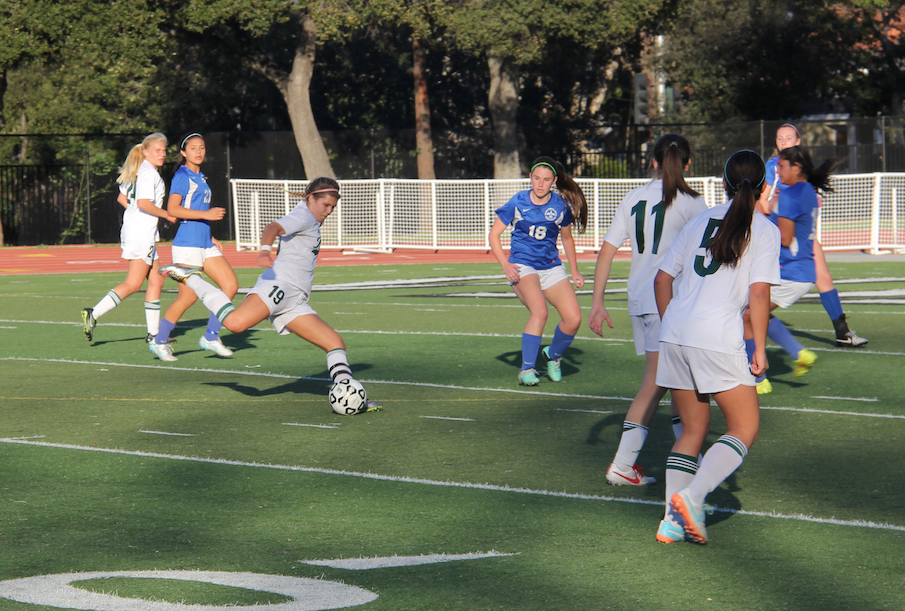 Junior Jacey Pederson scores a goal in the CCS semi-final match against Santa Theresa. The Vikings went on to win 5-0 and advance to the finals.

The Lady Vikes’ win against Santa Clara’s team was a crucial moment that spurred them forward.

“The win against Santa Clara [positively] affected the team,” junior Alison Lu said. “The first time we played them we lost 2-1, and we were not playing our best. This time around we were ready and determined to win. We were able to stay composed and played well together.”

According to senior Lena Chang, intense competition and a sense of revenge against Santa Clara High School’s team from past losses were also major factors that especially motivated the players.

“[The Santa Clara High School team members] were the only ones to beat us and end our winning streak, so we definitely came out hard and really wanted to win,” Carlstrom said. “I was proud of everyone on the team for putting them back in their place.”

In particular, Carlstrom applauded fellow junior Heidi Moeser for her contribution to the game.

“Moeser had been having a tough season and hadn’t scored a goal yet, so our coach changed her jersey number of 22, which she’d had since freshman year, to 24, and it proved to be lucky because she was on fire the whole game and scored her first goal of the season,” Carlstrom said.

Though the team basked in its pride after the accomplishment, its glory did not last forever.

“Losing to Mountain View was pretty devastating as it basically secured them the league title,” Lu said. “We let in two easy goals in the first half, and afterwards Mountain View condensed their back line, making it really hard to score.”

Both Chang and Carlstrom noted the close competition in the game and the deep disappointment felt by the loss.

“[It] was super tough for us all since we had been working so hard all season and it seemed to slip away in just one game,” Carlstrom said.
Lu and Chang reflected on some of the unsuccessful strategies and skills that led to their loss.

“I think we lost because we underestimated their long throw-ins and the speed of some of their forwards,” Lu said. “We were trying really hard to score early on which left some holes in the defense.”

“They ended up finding the net more than we could,” Chang said.

However, the team members kept motivating each other in preparation for their next game against Homestead. Instead of letting their recent loss get to them, they showed perseverance and resilience.

“We were all really focused, and it definitely showed in the result,” Carlstrom said. “[Winning against Homestead High School] was really uplifting after the hard loss against Mountain View, and really showed that we weren’t ready to go down without a fight.”

This win was particularly encouraging to the team for a variety of reasons.

“[The win against Homestead] gave us some hope at winning league,” Lu said. “After scoring so many goals, it gave us confidence.”

Lu attributes the team’s success to its different approach in the game compared to when it played against Santa Clara.

“It was different with Santa Clara [because then, we were forced] to score as many as possible,” Lu said. “With Homestead, we were never pressed to score. The goals just came naturally.”

For the team’s seniors, this game was exceptionally special.

“Our game against Homestead will always be in my memory, especially because the big win occurred on our senior night,” Chang said. “While there was no revenge factor like the Santa Clara game, we were all playing for each other with smiles on our faces.”

The players were elated after their win against Homestead and still had this champion’s spirit lead up to their final game of the season against Los Gatos. However, the team was up for a challenging fight which it eventually failed to win.

Even before the game, the air between the two school teams was tense.

“We’ve always been competitive when playing Los Gatos,” Chang said. “Two seasons ago, we were unable to play them in [the Central Coast Section (CCS)] due to a miscommunication that got us disqualified. Last season they knocked us out of CCS. You could say that we don’t particularly like them.”

To add salt to the wound, the tie with Los Gatos High School was established by a goal within the last few minutes of the game.

“The tie against Los Gatos was … just as tough on the team as the loss against Mountain View because we were the better team on the field, but some bad calls by the ref, a [poorly-maintained] field, [the team] not [taking] enough chances and the really heartbreaking goal in the last minutes of the game were the reasons we tied,” Carlstrom said.

“We dominated them throughout the majority of the game but could only find the goal once — not our best end to the game,” Chang said.
Lu added more detail about where she believed the team faltered.

“I think that the breaking point of the Los Gatos game was the last 15-20 minutes,” Lu said. “We became frantic in front of their box and just kept launching shots that were not very well placed or strong. Everyone wanted to score, [but] if we had calmed down for a second and just focused on working together and connecting passes, then a goal would have eventually taken place.”

Though the team was deeply discouraged by its more feeble end to the season than hoped, it resolved to get back up on its feet for the scrimmage against Menlo-Atherton on Saturday, Feb. 28.

“This week in training we will definitely be working on finishing our chances and working the ball out of the back,” Chang said. “With CCS next week, we want to make sure we remain focused.”

As promised, the Lady Vikes delivered and proved their determination with a 1-0 win against Menlo-Atherton.

“I know we are going to come back strong for CCS, just like we did after the tough loss to Mountain View,” Carlstrom said.