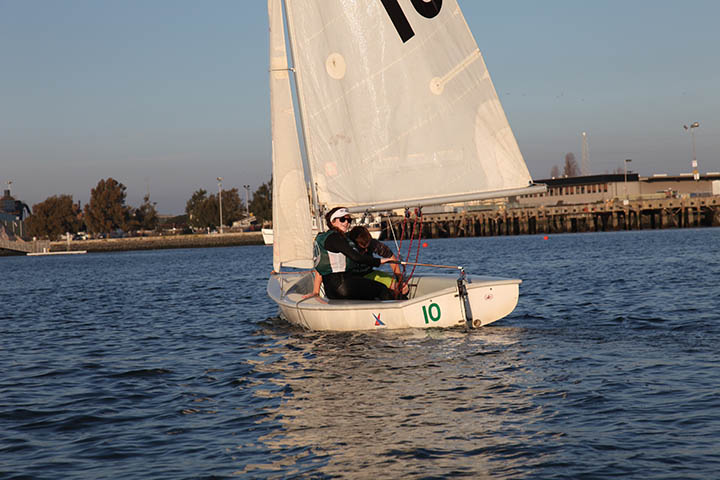 Paly sailing team members Maeve Lavelle and Sean Jawetz enjoy the waters at the Port of Redwood City in their sailing boat as they practice together for an upcoming event.

The widely unknown but unique Palo Alto High School sailing team is looking to expand its roster in future years and to bring awareness to the sport in general. The Paly team currently has a mere five members but is excited and hopeful to get the word out about the team. The team practices under the assistance of Peninsula Youth Sailing Foundation (PYSF) at the Port of Redwood City, Calif.

The Paly sailing team is one of 15 high school sailing teams that sail with PYSF. The teams practice together but at races, also known as regattas, the teams race for their own individual high schools in the Pacific Coast District.

The team travels throughout the Bay Area and along the West Coast in order to compete against other high school teams. One of the highlighted aspects of the team is unity and bonding.

“The goal of the team is to work together as best you can and improve together, so it’s not a one man job,” senior Maeve Lavelle said.

The sport has the potential to form close bonds within teammates which are ideal because trusting the other person in the boat is the key to success in races.

The Vikings just started their spring season, and practice three times a week.

“This year, I’m hoping to not only go to more events, but to bring Paly to more events and recruit more kids to the team,” junior Sean Jawetz said.

The team and coaches have a lot of praise for the sport and added their sincere invitations to at least try the sport.

“I would definitely say just to try it out,” Lavelle said. “We have tons of extra gear, so don’t be afraid of that.”

Jawetz looked back on when he first started sailing and seemed equally encouraging as Lavelle.

“One practice and I was hooked,” Jawetz said. “Sailing is an absolute blast, and I recommend anyone who has even an inkling of interest to join us out on the water for practice.”

“I’d want everyone to know it’s attainable,” O’Bryan Vandemoer said.  “You can come down and check it out and see if you like it.”

PYSF provides a platform for the Paly team with several coaches that help the sailors. The foundation takes the teams to regattas, and the more team members there are, the easier it is to go to regattas because four members are needed to compete.

“We love having new people since it means we can go to more places and events,” Lavelle said. “Sailing gives you an outdoor experience that’s unique and [allows you to] meet so many new people and travel to so many new places.”