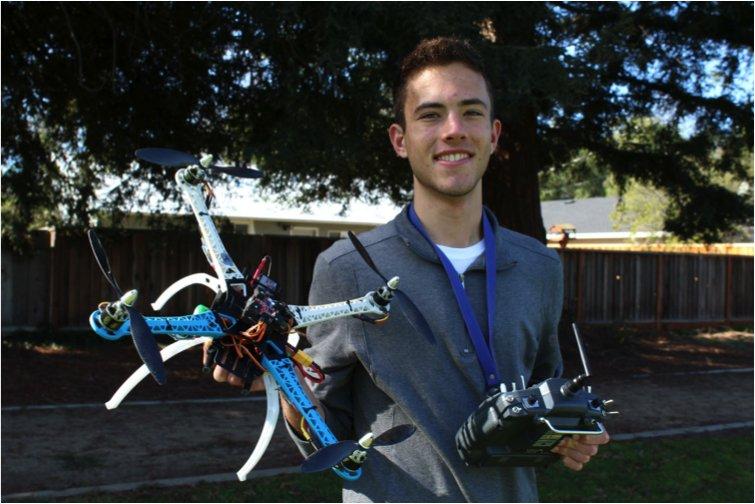 The rise in popularity of unmanned aerial vehicles

The sun was just about to set while I watched with anticipation as the propellers turned into a blur. I pressed my thumb into the full throttle position and was both surprised and extremely happy to watch the large quadcopter jump into the air. Positioning the rear of the blue and white quadcopter to face me, I moved the right stick toward the copter. The machine raced across the field with an impressive speed. A group of kids from the playground 50 paces away almost immediately stopped and stared with wide-eyes.

It was a month-long journey from the time I flew my store bought quadcopter and began  to dream of building my own. I spent many long hours researching, purchasing various electronics, waiting for them to arrive from far away countries, carefully putting them together and finally tweaking the control board software. Along the way, I met and received help from a number of incredibly skilled enthusiasts who helped me get my quadcopter into the air. Thanks to this expertise and some internet resources, I made a drone capable of rivaling the popular DJI Phantom. The only addition I need now is a global positioning system! Given how easy the process was, I am surprised that I don’t see more quadcopters flying at the park.

The first computers were gigantic, not very powerful and not affordable to the average consumer. Now almost anyone can go to their local electronics store and buy a reasonably priced computer. The same thing happened with drones. As technology got smaller and less expensive, the military was no longer the only one experimenting with this technology. Today, more and more people are able to fly these amazing machines in their backyard and local parks.

With kids like myself building and flying potentially dangerous technology, there is an increased concern about safety. Recently, headlines such as “White House Drone Crash Described as a U.S. Worker’s Drunken Lark” and “Special delivery: Drone drops contraband into Georgia prison yard” have given this concern more visibility.

Just like driving a car, operating a drone has some safety concerns. When driving a car, the driver needs to drive at a reasonable speed, obey traffic signs and stay away from pedestrians. However, when flying a drone, there are no speed limits, no stop signs or right of way rules. So how do quadcopter enthusiasts keep themselves and others around them safe? Mostly, people who operate these machines use common sense. For example, operators should never fly over houses or in densely populated areas.

There has been much speculation in Congress about passing anti-drone laws due to safety and security concerns. Now may be the time to try out this new remote control activity. However, going out and buying the newest thousand dollar quadcopter may not be how you want to spend your money. Start off small. For $50 dollars you can buy a micro quadcopter that someone with little to no experience in the remote control world could fly. Then, increase the size. Most of the time, bigger means more expensive— but not always. Instead of buying a larger quadcopter, I decided to build my own that was big enough to carry a high resolution camera. There are many reasons to build a quadcopter. You learn a lot about electronics and software, and meet hobby enthusiasts who are exceptionally kind and helpful. The people who answered my questions online and those who I met in person were both helpful and enthusiastic. They knew how difficult and frustrating it can be to build your own technology and were eager to help. On my first flight, a toddler, who was previously running around and a little bored at the park, watched my every move the whole time I was flying the quadcopter. If it can engage a toddler, it must have special powers.