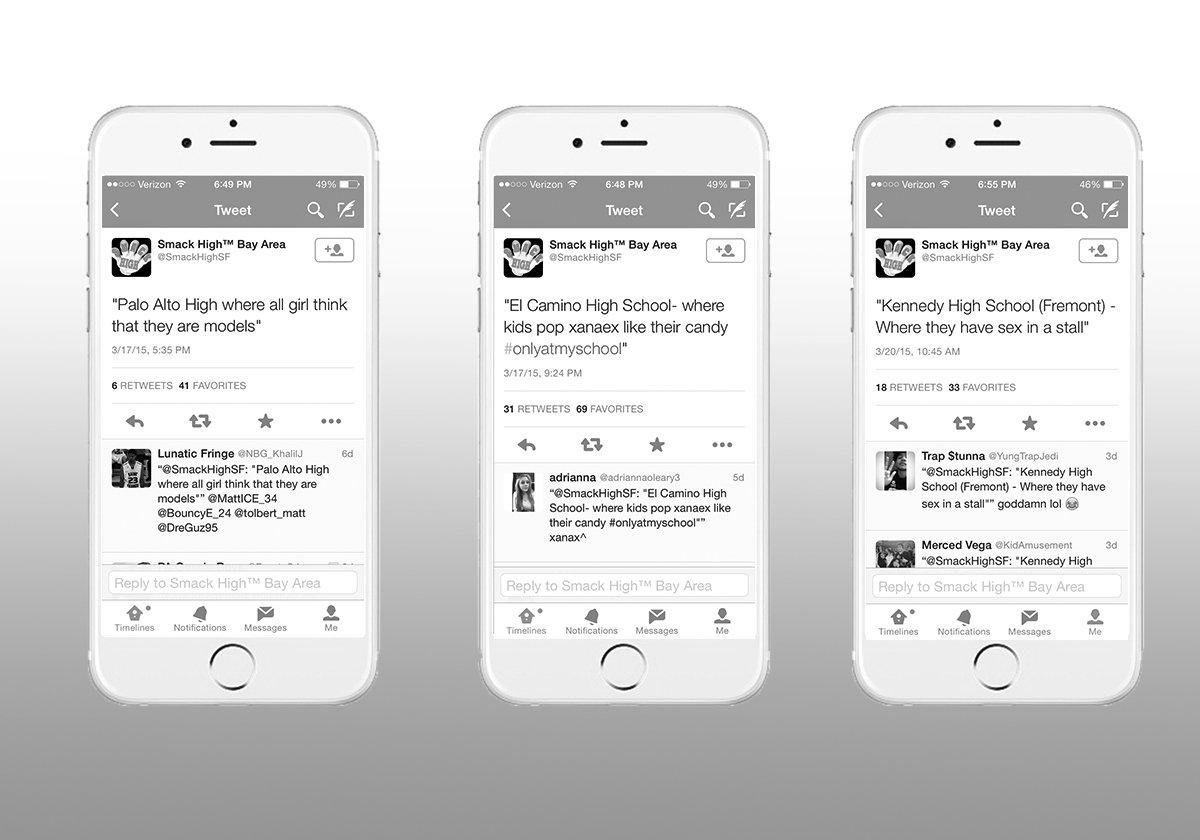 “Palo Alto High, where all girls think that they are models.”

Gaining popularity at Palo Alto High School, and throughout the country, is a Twitter account known as “Smack High.” It is self-described as the “largest collection of high school student-submitted news, stories, sports and entertainment” with the intent to “deliver instant, school specific news and happenings.” Smack High has accounts in 24 states and over 600,000 collective Twitter followers, receiving millions of engagements each month.

Each state that Smack High is established in has its own account focused on high school submissions for the specific state; for example, Smack High California.

Within those states, student volunteers take it into their own hands to manage accounts specific to a certain area, such as Smack High Bay Area. Through Twitter direct messages, mentions or an external link, students can submit any message they would like to be posted onto the account. Not every submission is approved — they are first screened by the account managers for any overly offensive content.

Most students in the Paly community first find Smack High through retweets that appear on their Twitter news feed. From there, they go on to investigate the account and see what it is all about. When scrolling down Smack High’s profile, the bulk of the tweets are “smacks,” or trash-talking between schools.

For instance, in a tweet directed at Paly, Smack High posted, “Dear Paly, your blood to alcohol level is higher than our GPA. Sincerely, Gunn.”

Throughout the entire feed, viewers and followers can see smack after smack, directed at specific schools. Compared to accounts such as Smack High Georgia and Smack High Alabama, whose tweets are mainly of sports, the Smack High Bay Area account focuses more on rival smack — which is a divergence from Smack High’s original intention.

“Most of their stuff is just talking smack about other high schools,” junior Bradley Brewster said. “The only ‘school-specific news and happenings’ that I have ever seen on there is someone sent in that Serra [High School] won the open division state championships for football. ”

A small portion of Smack High’s feed includes legitimate updates on current events at different schools. They also update scores to sports games relatively often. But even then, it is in the form of a smack from the winning team against the losing team.

“The majority of the account is anonymous comments that are sent in with the intention of teasing or provoking,” an anonymous freshman said. “Obviously, it is the admin of the account’s decision whether he or she should post more news or more rival smack, but if a ton of comments are being sent, he or she is going to want to put up whatever it is the followers want to see.”

The mass of the school-on-school bashing posted on Smack High may seem like it’s all in good fun. Since no individuals are named, the smacks are therefore are assumed to be less offensive, allowing them to pass the account manager’s screening and be shared with the public.

While some students look at the smacks and do not think twice about them, others take offense. There is one side that views Smack High as a form of cyberbullying, calling out the account for allowing schools and individuals to badger each other on social media.

“In my opinion, Smack High is definitely bullying of a sort,” junior Kash Rogers said. “It constantly talks down schools, which I think is crazy. The fact that if one student has something to say about you, and sends it in to Smack High, their opinion, whether negative or positive is now publicized to eight thousand plus people. I don’t think that’s okay.”

The other side find the tweets to be vague enough, not targeting one person or a specific group of people so that they are not considered harmful or constitute as harassment.

By allowing rival smacks to take up the most volume on the account, Smack High becomes an outlet for school rivalries to flourish. Posting subject content that provokes a response increases the engagement from the public, causing more smacks to be submitted.

Using Smack High as an outlet, students have expressed themselves. As more rival smacks are posted, more engagements the account receives, and larger its coverage grows.