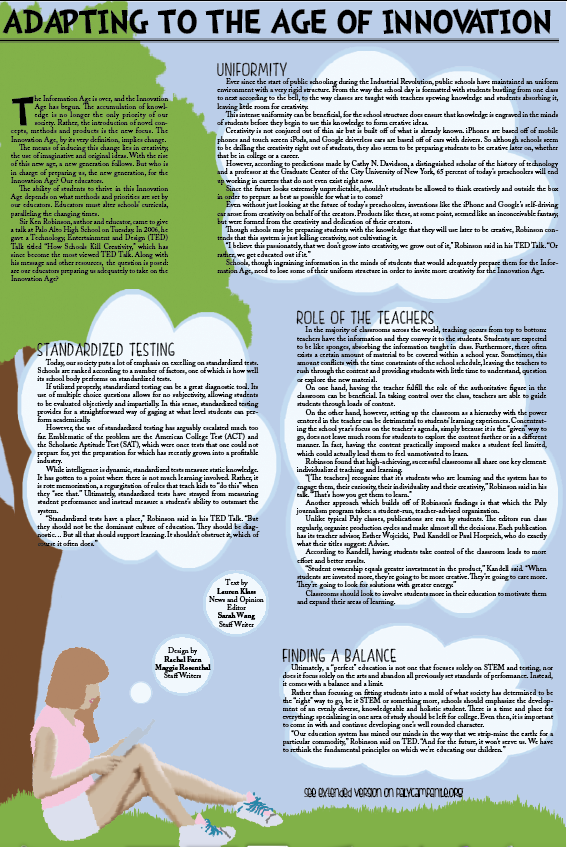 Adapting to the age of innovation

The Information Age is over, and the Innovation Age has begun. The accumulation of knowledge is no longer the only priority of our society. Rather, the introduction of novel concepts, methods and products is the new focus. The Innovation Age, by its very definition, implies change.

The means of inducing this change lies in creativity, the use of imaginative and original ideas. With the rise of this new age, a new generation follows. But who is in charge of preparing us, the new generation, for the Innovation Age? Our educators.

The ability of students to thrive in this Innovation Age depends on what methods and priorities are set by our educators. Educators must alter schools’ curricula, paralleling the changing times.

Sir Ken Robinson, author and educator, came to give a talk at Palo Alto High School on Tuesday. In 2006, he gave a Technology, Entertainment and Design (TED) Talk titled “How Schools Kill Creativity,” which has since become the most viewed TED Talk. Along with his message and other resources, the question is posed: are our educators preparing us adequately to take on the Innovation Age?

With the pressure to be “right,” students try to get the right answer to be subsequently lauded by the school culture. Other students see this “success” and want to do the same. This creates a competitive environment with everyone trying to outsmart the other by getting more and more right. Although this creates a seemingly cutthroat culture, students are pushed to their full potential. With students competing to come out on top, everyone ups their standards in order to stay ahead. In this competitive surrounding, students strive to continually develop, leading them to be more capable and prepared when they reach adulthood.

However, since this competitive culture values the right answer, it naturally stigmatizes the wrong answer. Fitting into the culture requires always being “right,” causing students to fear making mistakes. No one wants to take any risks out of fear of getting the wrong answer, and this attitude has negative consequences.

When students are scared of making any mistakes, they will not not even try to come up with new ideas to solve problems because this might result in failure, an idea just about everyone is afraid of. According to Robinson, originality and innovation, key to the Innovation Age, is unattainable without making mistakes.

“If you’re not prepared to be wrong, you’ll never come up with anything original,” Robinson said in his TED Talk on creativity. “We stigmatize mistakes. And we’re now running national education systems where mistakes are the worst thing you can make. And the result is that we are educating people out of their creative capacities.”

Although an emphasis on getting the correct answer pushes students to work their hardest and reach their potentials in terms of learning what is right and wrong, students are inhibited from reaching creative potentials and coming up with new ideas which could ultimately make for a progressive society. School culture creates a beneficial competitiveness, but needs to destigmatize mistakes to stimulate creativity. Students should be encouraged to take risks, even if that means failing a few times along the way.

Uniformity
Ever since the start of public schooling during the Industrial Revolution, public schools have maintained an uniform environment with a very rigid structure. From the way the school day is formatted with students bustling from one class to next according to the bell, to the way classes are taught with teachers spewing knowledge and students absorbing it, leaving little room for creativity.

This intense uniformity can be beneficial, for the school structure does ensure that knowledge is engraved in the minds of students before they begin to use this knowledge to form creative ideas.

Creativity is not conjured out of thin air but is built off of what is already known. iPhones are based off of mobile phones and touch screen iPods, and Google driverless cars are based off of cars with drivers. So although schools seem to be drilling the creativity right out of students, they also seem to be preparing students to be creative later on, whether that be in college or a career.

However, according to predictions made by Cathy N. Davidson, a distinguished scholar of the history of technology and a professor at the Graduate Center of the City University of New York, 65 percent of today’s preschoolers will end up working in careers that do not even exist right now.

Since the future looks extremely unpredictable, shouldn’t students be allowed to think creatively and outside the box in order to prepare as best as possible for what is to come?

Even without just looking at the future of today’s preschoolers, inventions like the iPhone and Google’s self-driving car arose from creativity on behalf of the creators. Products like these, at some point, seemed like an inconceivable fantasy, but were formed from the creativity and dedication of their creators.

Though schools may be preparing students with the knowledge that they will use later to be creative, Robinson contends that this system is just killing creativity, not cultivating it.

“I believe this passionately, that we don’t grow into creativity, we grow out of it,” Robinson said in his TED Talk. “Or rather, we get educated out if it.”

Schools, though ingraining information in the minds of students that would adequately prepare them for the Information Age, need to lose some of their uniform structure in order to invite more creativity for the Innovation Age.

If utilized properly, standardized testing can be a great diagnostic tool. Its use of multiple choice questions allows for no subjectivity, allowing students to be evaluated objectively and impartially. In this sense, standardized testing provides for a straightforward way of gaging at what level students can perform academically.

However, the use of standardized testing has arguably escalated much too far. Emblematic of the problem are the American College Test (ACT) and the Scholastic Aptitude Test (SAT), which were once tests that one could not prepare for, yet the preparation for which has recently grown into a profitable industry.

While intelligence is dynamic, standardized tests measure static knowledge. It has gotten to a point where there is not much learning involved. Rather, it is rote memorization, a regurgitation of rules that teach kids to “do this” when they “see that.” Ultimately, standardized tests have strayed from measuring student performance and instead measure a student’s ability to outsmart the system.

“Standardized tests have a place,” Robinson said in his TED Talk. “But they should not be the dominant culture of education. They should be diagnostic… But all that should support learning. It shouldn’t obstruct it, which of course it often does.”

Role of the Teachers
In the majority of classrooms across the world, teaching occurs from top to bottom: teachers have the information and they convey it to the students. Students are expected to be like sponges, absorbing the information taught in class. Furthermore, there often exists a certain amount of material to be covered within a school year. Sometimes, this amount conflicts with the time constraints of the school schedule, leaving the teachers to rush through the content and providing students with little time to understand, question or explore the new material.

On one hand, having the teacher fulfill the role of the authoritative figure in the classroom can be beneficial. In taking control over the class, teachers are able to guide students through loads of content.

On the other hand, however, setting up the classroom as a hierarchy with the power centered in the teacher can be detrimental to students’ learning experiences. Concentrating the school year’s focus on the teacher’s agenda, simply because it is the “given” way to go, does not leave much room for students to explore the content further or in a different manner. In fact, having the content practically imposed makes a student feel limited, which could actually lead them to feel unmotivated to learn.

“[The teachers] recognize that it’s students who are learning and the system has to engage them, their curiosity, their individuality and their creativity,” Robinson said in his talk. “That’s how you get them to learn.”

Another approach which builds off of Robinson’s findings is that which the Paly journalism program takes: a student-run, teacher-advised organization.

Unlike typical Paly classes, publications are run by students. The editors run class regularly, organize production cycles and make almost all the decisions. Each publication has its teacher advisor, Esther Wojcicki, Paul Kandell or Paul Hoeprich, who do exactly what their titles suggest: Advise.

According to Kandell, having students take control of the classroom leads to more effort and better results.

Classrooms should look to involve students more in their education to motivate them and expand their areas of learning.

Ultimately, a “perfect” education is not one that focuses solely on STEM and testing, nor does it focus solely on the arts and abandon all previously set standards of performance. Instead, it comes with a balance and a limit.

Rather than focusing on fitting students into a mold of what society has determined to be the “right” way to go, be it STEM or something more, schools should emphasize the development of an evenly diverse, knowledgeable and holistic student. There is a time and place for everything: specializing in one area of study should be left for college. Even then, it is important to come in with and continue developing one’s well rounded character.

“Our education system has mined our minds in the way that we strip-mine the earth: for a particular commodity,” Robinson said on TED. “And for the future, it won’t serve us. We have to rethink the fundamental principles on which we’re educating our children.”