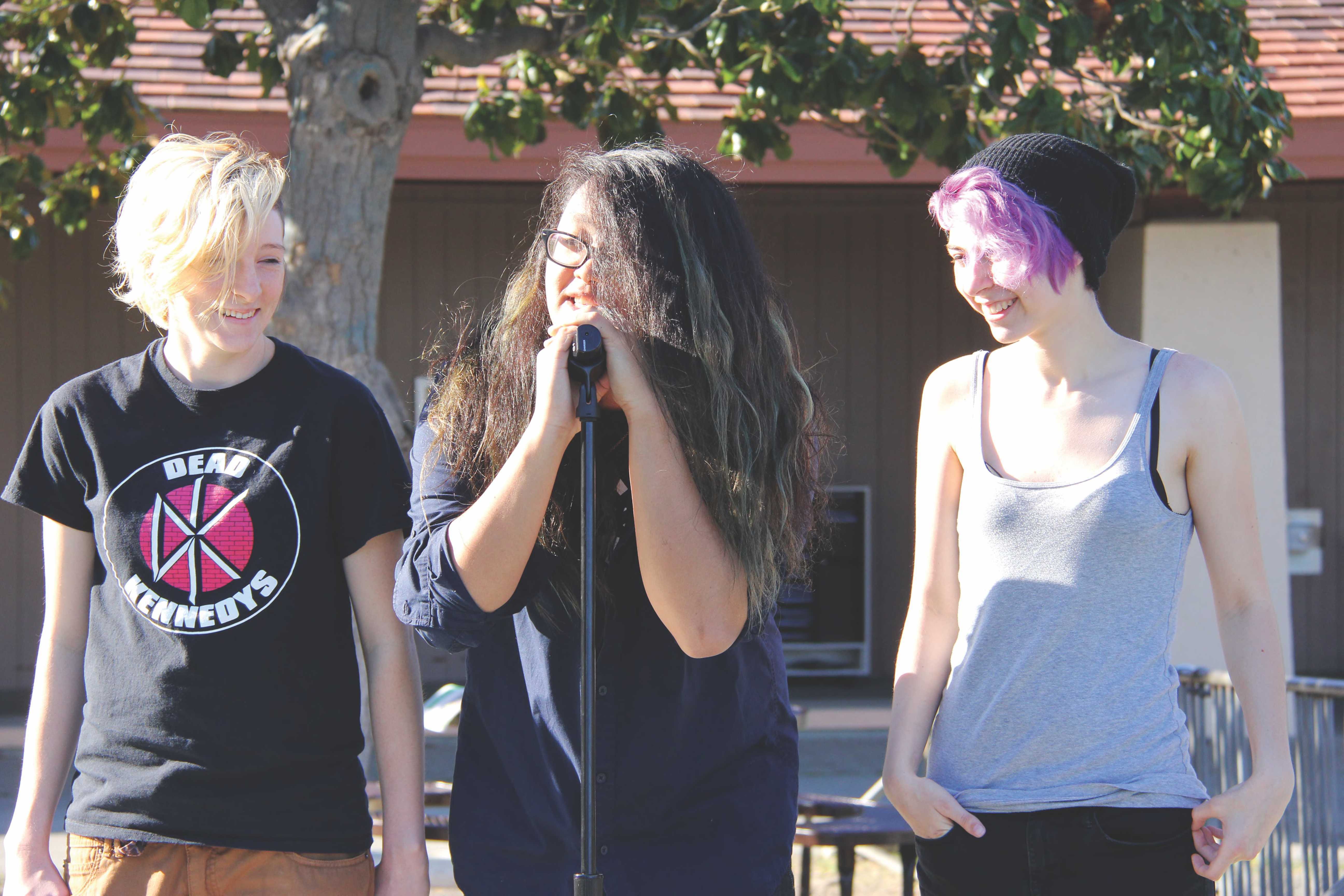 Members of the group Koitus, Jess Feeman, Gabe Galang and Karly Quadros, practice for the Battle of the Bands competition.

Battle of the Bands raises funds for the arts

The Boys and Girls Clubs of the Peninsula (BGCP) will hosts its second annual Battle of the Bands fundraiser at the Palo Alto High School Haymarket Theater on Friday, March 27, to raise funds toward expanding its arts and music programs.

The event marks its second year after first being organized by a group of BGCP youth volunteers, the High School Champions, who support the organization through fundraisers, according to the BGCP website.

Entry into the event costs $5, but bringing donated art supplies reduces the cost to $3. All proceeds will go toward improving the arts and music programs of the various BGCP sites in East Palo Alto, Menlo Park and Redwood City. BGCP works toward closing the achievement gap in at-risk neighborhoods, and as a nonprofit, relies on financial support from the surrounding community.

Two of the six bands scheduled to compete, Paper Islands and Koitus, are comprised of Paly students. The fundraiser will function as a competition between bands with the winner decided by local judges, according to High School Champion Alex Matthys, a senior at Henry M. Gunn High School.

“There will be three judges who will determine among themselves who wins,” Matthys said. “All [of the judges] are professional musicians or very involved in music.”

This format marks a change from the last year’s event, where professional bands played after student bands and also served as judges. This change was implemented after the organizers noticed more interest in student bands, according to High School Champion Saba Moussavian, a junior at Paly.

“Most people ended up coming for the high school bands, so we decided to focus more on those,” Moussavian said. “It’s going to be a great opportunity for students to hear local bands.”

The idea came from Matthys, who started teaching a music program at the BGCP clubhouses a few years ago after noticing a lack of opportunities for the kids to experience music.

“[I] came to the Boys and Girls Clubs when they didn’t have any music programs,” Matthys said. “We’ve slowly built it up, but now we’re really trying to expand more because the kids love it.”

In order to expand BGCP’s arts and music programs, the organization needs the basic supplies required to participate and learn in these activities. According to Matthys, most sites do not even have some of the most fundamental materials.

“Of the three local clubhouses, which are the main BGCP sites in this area, only one of them has any actual musical equipment besides a standard piano,” Matthys said. “[The] most important [supply needed] is equipment such as guitars and drums, [and the] second most important thing lacking are students and teachers to help teach classes on music.”

Matthys believes this year’s fundraiser should be more successful in reaching its goal of expanding the arts and music programs, especially with the new changes in place.

In addition to the music provided by the competing bands, the event will include snacks for purchase and a raffle for BGCP apparel and gift cards, according to the event’s Facebook page.