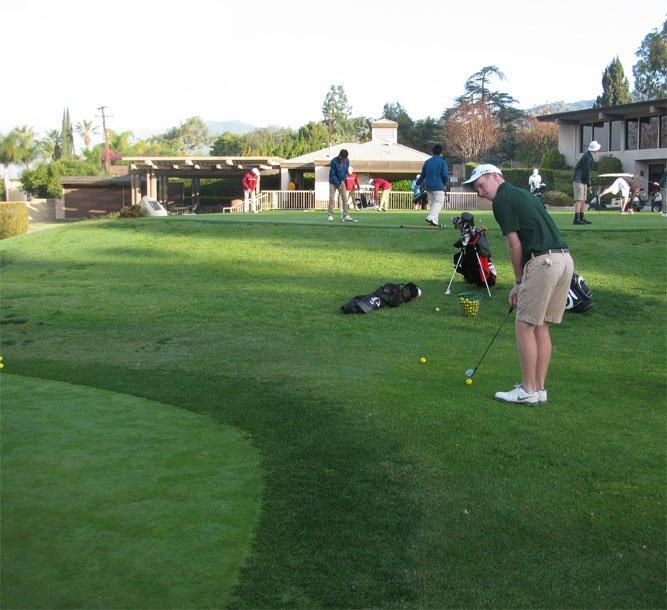 Junior Henry Gordon prepares for an upcoming tournament by practicing his swing at the Glendora Country Club in Pasadena.

“Our team plays extremely well as a whole, and the new freshmen additions have made it so that we have some nice depth,” Gordon said. “We are extremely strong with depth, and when our top guys do not perform at the level they need to, some of the lower guys can pick us right back up.”

The staggered dynamic has clearly been working for the team, as they are currently 4-1 overall and 2-0 in leagues this year and hope to remain as the current undefeated league champions for the third year in a row. Coach Doyle Knight agrees with Henry about the team’s diversity. Even after a loss to Sacred Heart Preparatory High School, they still plan to take the top position in Leagues and Central Coast Section (CCS).

“We have a great team, with two freshmen who are some of our top players.” Knight said. “The ratio of players keeps us balanced not only for this year but for future teams also.”

Freshmen are usually underrated in most sports due to lack of experience, however, the freshman on the golf team prove otherwise.

The boys golf team works as a fine-tuned machine when they work together, however, each player hones in on his own talents so he can improve as both an individual and and team player.

“We are playing Cupertino [High School] for our next match, and so we are just focusing on individual improvement for the time being,” Gordon said. “We just want to eliminate mental mistakes and start to play smarter in our preparation for Leagues and CCS.”

Gordon thinks that the team’s biggest focus would be to target mental attitude during gameplay, but Knight thinks that there are more tangible things that they need to work on.

“What they work on is to control the flight of the ball to be able to place it where they want with accuracy and consistency and to finish it off by putting well,” Knight said. “Bad putting leads to bad scores.”

The boys feel confident that if they maintain their path and fix mental errors, they can look ahead to eventually play top-notch in tournaments such as NorCals as well as their end goal of Leagues and CCS.

“As long as we win our league matches and play well at the league tournament at Santa Teresa, we are set for CCS,” Gordon Said.

According to Gordon and Knight, the boys will have what it takes to be the tough team to beat this season.