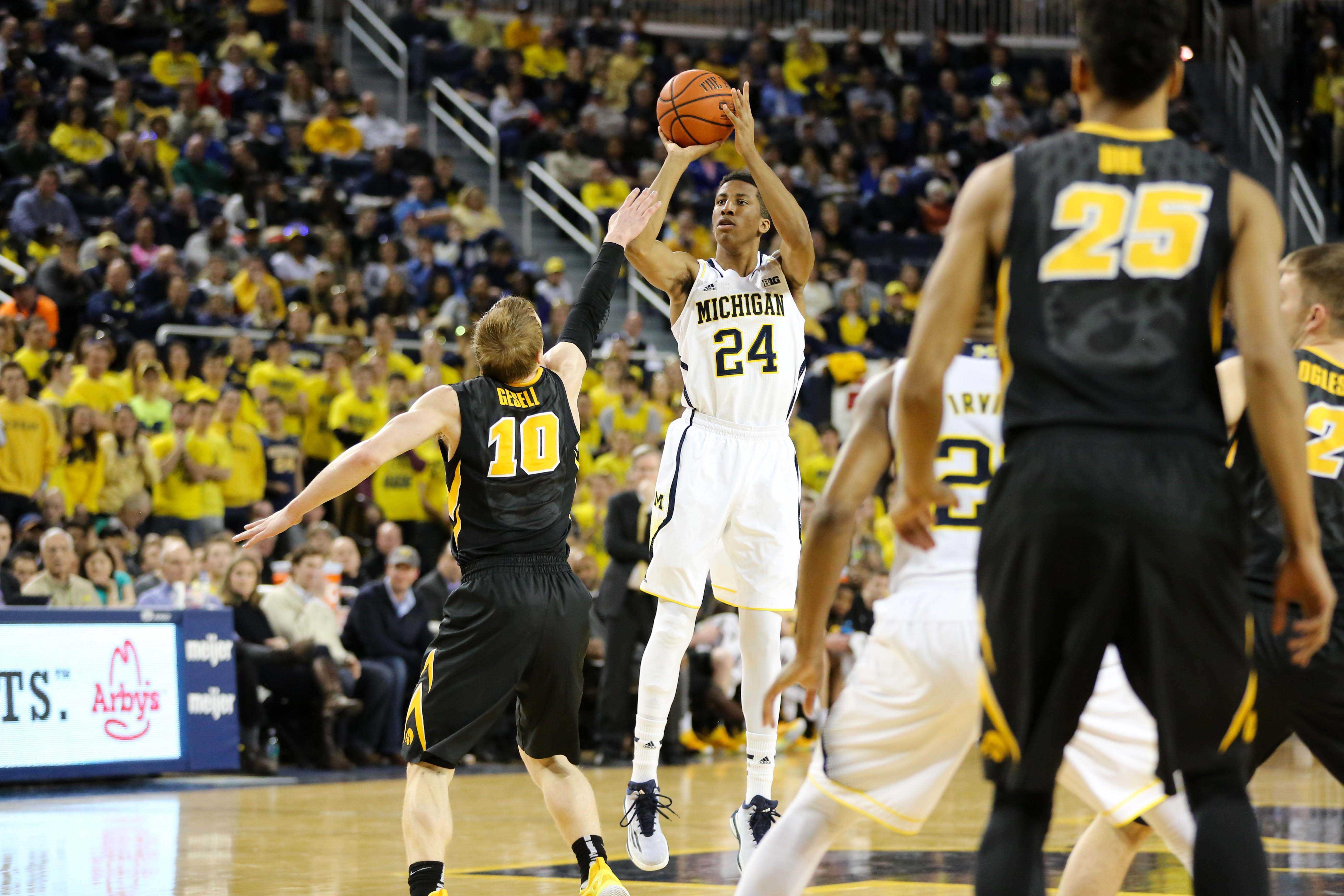 Dawkins shines at University of Michigan

Although the University of Michigan basketball team has faced many setbacks this season, one of its freshman players, Aubrey Dawkins, has shown his potential as a rising star on the team. Dawkins has greatly benefitted the team throughout the last half of the season and was recently named Big Ten Freshman of the Week by the Big Ten conference.

Dawkins is a Paly graduate, a member of the class of 2013. During his junior and senior years with the Vikings, he helped lead the team to back-to-back Santa Clara Valley Athletic League (SCVAL) De Anza Division titles and the opportunity to participate in the Central Coast Section (CCS) tournament. Dawkins was additionally named the 2013 Most Valuable Player of the SCVAL De Anza Division as a senior. Despite these achievements, Dawkins was not at the level of a Division I player after graduating from Paly. Instead of immediately pursuing college recruitment, he chose to spend a year at New Hampton Prep School to continue to train and hone his skills and improve his recruiting profile. Dawkins averaged 12.3 points and 3.6 rebounds during this year, playing in one of the most competitive prep school conferences in the country. As the year drew to a close, no major scholarships were offered to Dawkins — until the University of Michigan reached out to him. If the University of Michigan had not reached out to Dawkins, he could have taken part in the Stanford University’s basketball program.

This is because Dawkins’ father, Johnny Dawkins, is the current head coach at Stanford. That being said, Aubrey Dawkins was determined not to rely on his father’s position and wanted to a pave a road for himself based solely off his merit as a player, something his father praises him for.

“He didn’t want to live off what I had done,” Johnny Dawkins told Mlive.com in an interview. “He wanted to prove to people on his own merits that he was a good basketball player. I respect him for that. I’m impressed by that approach.”

For the first 12 games of this season, Aubrey Dawkins only played about 63 minutes and scored a total of 15 points. He spent most of his time during games on the bench until the team’s first game against University of Illinois. However, Aubrey Dawkins’ stellar breakout performance ultimately carried the team to victory — he hit six three pointers to finish with 20 points and gave the team a 67-63 lead with just over a minute remaining in overtime.

Aubrey Dawkins’ excellent performance did not stop at this game. He went on to accumulate significantly increased amounts of playing time in later games and also increased his field goal percentage and points scored per game, most notably in the team’s game against Rutgers University. During this game, Aubrey Dawkins scored 31 points, with eight three pointers.

Aubrey Dawkins’ performance helped the team secure a win, and he has continued to assist the team in performing to the best of its ability. Additionally, he is the first freshman from the University of Michigan to score more than 30 points in a game since Trey Burke scored 30 against the University of Minnesota in 2012.  John Beilein, the team’s head coach, believes that Aubrey Dawkins’ recent performance is a sign of growth that he has worked for.

“[His recent performance] shows the tremendous growth in him,” Beilein said in an interview with Mlive.com. “When he got it, he needed to get it off quicker and he’s worked hard at that.  He’s got a short memory when it comes to misses. He’s back out there, loading the gun and shooting it again. He worked hard at this and I’m really happy for him.”

Aubrey Dawkins was named Big Ten’s Freshman of the Week, recognizing his growth and the contributions he has made to his team. This is not only Aubrey Dawkins’ first Big Ten award, but the first and only Big Ten award the University of Michigan has received this season. The team may have lost the quarterfinals of the Big Ten Tournament to the University of Wisconsin and not received a March Madness or National Invitational Tournament bid for the first time in years, but with stars such as Aubery Dawkins, there is a lot to look forward to in upcoming years.