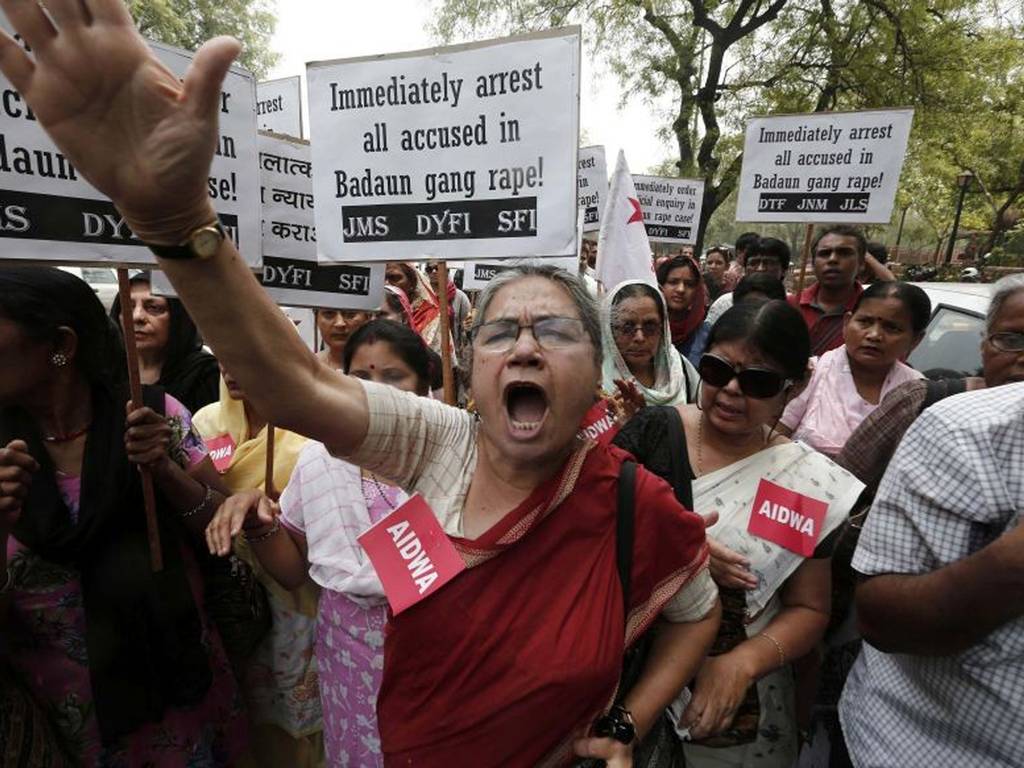 The All India Democratic Woman’s Association in India show its disgust while protesting after teenage girls were gang raped.

The Indian government’s attempted suppression of the documentary film “India’s Daughter,” which covers the atrocious 2012 Delhi gang rape of a 23-year-old woman and includes shocking interviews of the convicted rapists, has sparked intense controversy over whether India’s population should have access to such a film or if the film generalizes and vilifies India’s culture to an unfair degree.

Directed by Leslee Udwin, the film is part of British Broadcasting Corporation’s (BBC) Storyville series, which plays the world’s most acclaimed documentaries. It was scheduled to air throughout the world on March 8, International Women’s Day; the film was broadcast as planned, in all countries except India.

On the fateful evening of Dec. 16, 2012 in Munrika in South Delhi, female physiotherapy intern Jyoti Singh and her male friend were walking back home from watching “Life of Pi” in theaters when a private bus appeared and offered to take them the rest of the way to their home town. Once in the bus, Jyoti Singh was raped by six men, including the driver. Jyoti Singh and her male friend were both beaten and thrown out onto the road where they were found later that night, and though Jyoti Singh was taken in for treatment thirteen days after the incident, she died soon after from her serious injuries.

Immediately after the public found out about this event, the Indian government received harsh criticism from within the country and abroad for failing to properly protect its women. Starting in New Delhi, protests broke out throughout India and clashed violently with government security forces.

The six men were arrested, charged with sexual assault and murder and put through trial. One of the adults, Ram Singh, died in jail from alleged suicide, though his family claims he was murdered, and the one juvenile was given a sentence of three years in a reform facility. The other four accused were sentenced to death by hanging on March 13, 2014.

The film received much criticism for several different reasons. Some people criticized the authorities for allowing the interview to take place even after the convicts had pleaded not guilty and appealed their death sentences. Other critics accuse the film of helping rapists justify their actions and blame victims, while others, still, point accusatory fingers at BBC for painting all of India as a rape-infested, unjust nation that dehumanizes women.

Regardless, many people around the world were too shocked by some of the rapists’ mindsets and words to simply let the issue go.

Especially condemned by the public was the overwhelming sense of victim blaming present in the statements made by the convicted men.

“A decent girl won’t roam around at nine o’clock at night,” Mukesh Singh, the bus driver, said. “Housework and housekeeping is for girls, not roaming in discos and bars at night doing wrong things, wearing wrong clothes.”

In addition to questioning Jyoti Singh’s decency as a person and claiming poor choice in behavior, Mukesh Singh bluntly blamed her for the rape because she was a woman.

“A girl is far more responsible for rape than a boy,” Mukesh Singh said. “When being raped, she shouldn’t fight back. She should just be silent and allow the rape. Then they’d have dropped her off after ‘doing her,’ and only hit the boy.”

Mukesh Singh expressed what effects he believed putting the rapists to death would instigate.

“The death penalty will make things even more dangerous for girls,” Mukesh Singh said. “Now when [people] rape, they won’t leave the girl like we did. They will kill her. Before, they would rape and say, ‘Leave her, she won’t tell anyone.’ Now when they rape, especially the criminal types, they will just kill the girl. Death.”

Even when Udwin read out the details of Jyoti Singh’s numerous injuries to Mukesh Singh in his interview, she was unable to find even “a glimmer of regret” on the part of the perpetrator, according to her article on the BBC.

Chilled to the bone by the lack of remorse and the extreme devaluing of women, many people called for changes to government policy as well as to what some see as a misogynistic culture in India.

Though the government had banned the film in India, it was released on YouTube on March 4, 2015 even before it aired on television. Millions of people worldwide were able to access the documentary before the Indian government asked YouTube to take down the video the next day.

Still, copies of the film were made available online through other means and continued to stir up agitation.

Even within India, activists have taken direct action to spread awareness. In front of 50 people at the Ravidas Camp in the slum where the rapists lived, activist Ketan Dixit projected the film on large sheets. This was his second time publicly showing the documentary.

“This film is important,” Dixit said. “Poor people already know about this rape case and they are interested in it. They should get to know the mindset of the rapist in this case.”

Though some people at the public screening left part way because they could not understand English and the police injuncted the screening on the grounds of rising tensions, the shock from the film still created waves of support from people around the world rallying for women’s protection and rights.

“There is already a very loud conversation in India about this grim reality [of rape culture in India],” Kavita Krishnan, secretary of the All India Progressive Women’s Association, told the Los Angeles Times. “[The rape culture] lies very widely among the society at large. Reducing it to this one man and this one film is not the answer.”

Udwin emphasized the global relevance and significance of this incident and its resulting protests.

Change is happening across the world as both men and women refuse to sit around and let rape and misogyny be swept under the rug .

“What carried me through … was what had inspired me in the first place: the new-thinkers, especially among the youth, in India who want change and are clamouring for it,” Udwin said. “And I am absolutely optimistic that we are now on the cusp of change.”