Many residents from Alaska and Oregon will be saying “I’m on that good kush and alcohol” come 2016. Although 27 states and the District of Columbia either allow the medical use of cannabis, or decriminalized possession of small amounts of it only four states allow it to be used for recreational use.

According to a November 2013 report from ArcView Market Research, a San Francisco-based investor group focused on the marijuana industry, the legal cannabis market was worth $1.53 billion in 2013 and in five years is predicted to be worth over $10 billion. According to the Huffington Post, after the first two months of legal recreational use in Colorado, $6.17 million dollars were collected in tax revenue. Of all the money to be gained by the legal sale of cannabis, Colorado has decided to give $40 million of its earnings towards the construction of public schools. As marijuana continues to bring in an increasing amount of money, why have other states not allowed cannabis to be used for recreational use?

According to NerdWallet, if all 50 states accepted legalization, they would bring in over $3 billion dollars in tax revenue, and the amount would continue to increase yearly. The annual revenue collected by these dispensaries is projected to reach anywhere from $10 to $15 billion by the year 2018. If California were to accept the recreational use, it would benefit the most economically, bringing in upwards of $519 million per year, while New York would would be second with $248 million.

In the recreational marijuana business, an ounce of marijuana can cost anywhere from $150 to $300. However, most customers never buy that much at once. The most common marijuana purchase is about an eighth of an ounce, costing anywhere from $25 to $45.

Colorado is able to benefit from the sale of legal cannabis as a result of the high tax that is imposed when buying marijuana. When buying an eighth of an ounce that costs $30, state taxes will add an additional  $6, while a special Denver tax will add another $2.59. After all taxes are applied, the customer pays an additional 29 percent.

Allowing both the recreational use of cannabis and medical use of cannabis does not only bring in money for the states that allow it, but it also has the potential to create thousands of jobs for the residents of these states. As of April 2014, the legal cannabis market has created anywhere from 7,500 to 10,000 jobs for the people of Colorado, according to Michael Elliott, the Executive Director of the Marijuana Industry Group.

This single reform has allowed local law enforcement agencies to focus on other issues within the state. By removing several of these marijuana penalties, Colorado has saved between $12 million and $40 million, according to the Colorado Center on Law and Policy.

Legalization of recreational  marijuana has continued to gain public support since it became an issue. According to a Gallup Poll, in 1969, eight out of ten Americans opposed legalization.  In 2010, when California voted on Proposition 19, which would have legalized marijuana, it garnered 47 percent support and was narrowly defeated by a 53 percent majority. Just three years later, in October of 2013, a Gallup Poll found that 58 percent of adults were in favor of legalizing marijuana.

Colorado, a state with similar approval concerning recreational use, allows its citizens over the age of 21 to buy no more than one ounce of cannabis per visit. One downside to the recreational use of cannabis is the lack of enforcement that follows. No law requires dispensaries to keep records of what their customers buy, and how much they buy. The one ounce limit is up to the customer to abide by. Nothing prevents customers from visiting multiple dispensaries, and purchasing one ounce at every store they visit.

Many people hop from one store to another, in the hopes of being able to accumulate enough marijuana to sell on the black market. Selling their legally bought cannabis on the black market in hopes of making some sort of profit is known as smurfing. Smurfing is something that many officials were worried about with the legalization of cannabis.

With clear economic benefits such as an increase of employment as well as a new market for taxation, the legalization of cannabis seems beneficial. However, the contrast of drawbacks such as poor regulation makes it a controversial proposition. It is up to the people of California to decide whether recreational marijuana use would be most advantageous, taking social and economic factors into account. 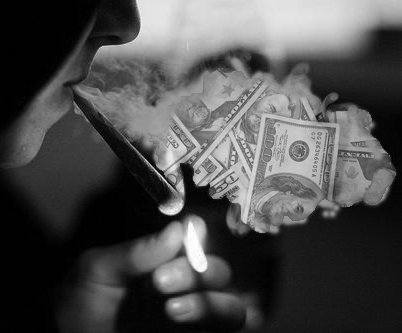