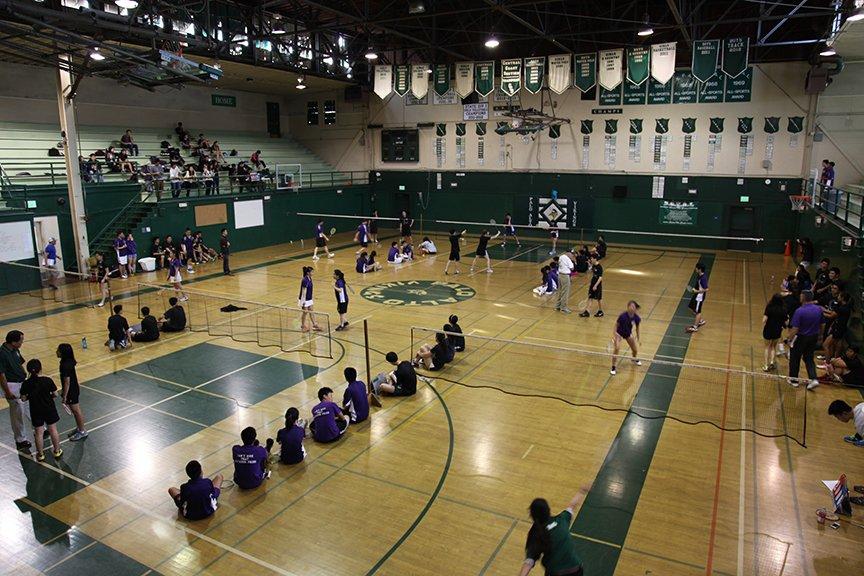 The Paly badminton team faces off against Monta Vista High School in the Big Gym.

Palo Alto High School’s badminton team began its season with a loss against Monta Vista High School; however, the team is still optimistic for the rest of the season.

The Vikings began down multiple points, however the gap soon closed to 16 – 14 after multiple successful shots by Eric Chiang and mistakes by the Matadors. As the game progressed, the score difference increased once again and the Paly boys could not overcome their point deficit.

After a brief respite, the game moved to the second round, with Monta Vista pulling an early 5 point lead over the Vikings. A crowd grew as the game intensified, and the players competed with several successive volleys, taking increasingly difficult shots to beat their competition.

Despite the efforts of Chiang and Chang, Monta Vista increased its lead, finally winning the game 21 to 12. The match did not continue on to the third round. However, Chang is happy with the result of the game despite the fact that the team lost.

“It was a tough match, we knew who we were playing,” Chang said. “We tried our best, and I think we made a good effort. I think Eric played well overall. What we should’ve done [was] attack Shawn a lot more and play keep away on Justin Ma.”

Around the gym, it appeared that Paly’s teams would not win many games, as varsity 1 boys singles team lost against Monta Vista setting the tone of the tournament for the Vikings.

However, a little beacon of light appeared as sophomore Linus Wang and freshman Jackie Cai successfully defeated Monta Vista in the last two rounds, gaining a much needed win for the team.

“I know during the first game we were having communication problems and we were rushing,” Cai said. “But once we slowed down the pace, we knew what we were doing and I was really confident. We did not drop as much and we tried to drive a lot more.”

However, the Vikings had already lost overall, as the Matadors already grabbed 17 out of the 30 points in the game.

Nevertheless, the games continued and the Viking’s varsity 3 boys doubles team of seniors Dan Su and Matthew Li beat Monta Vista’s own team in two rounds, bringing Paly’s score up by one. In the end, Monta Vista High School beat Paly 26-4. Despite the overall score, Assistant Coach Arne Lim expressed the need for a positive attitude.

“Going into this match, I thought that we would have a very difficult time getting points,” Lim said. “Yet you still put your best foot forwards.”

Lim also said that a number of good players were unable to play due to missing medical cards.

“We had to shape up some of the errors that we had over the past two years,” Lim said. “People can’t just walk in and play and not attend practice. What is important is they be consistent and I be consistent and we will be able to experience something that we’ve never imagined.

The team’s next game is March 31 against Lynbrook High School at home.