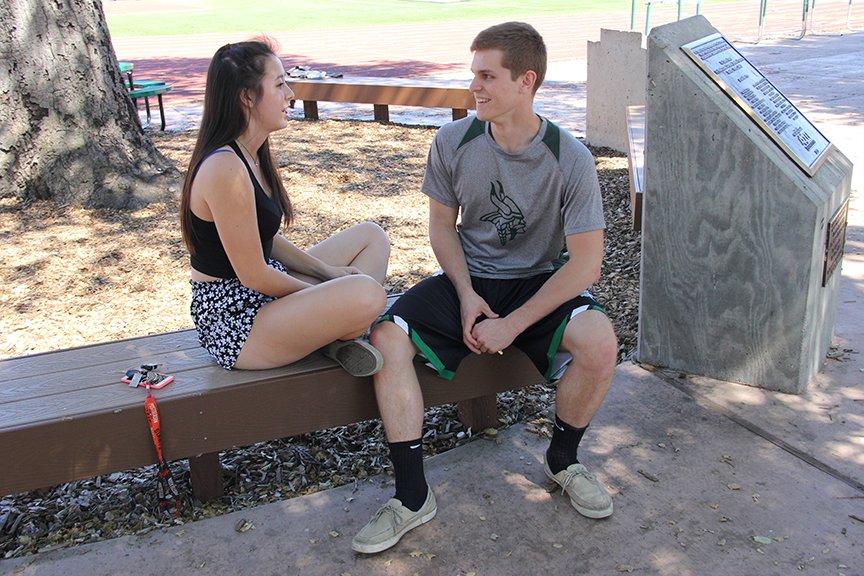 Seniors Jade Schoenberger and John Rogers speaking openly with each other.

Openness is key to relationships

Everyone has been asked, or has at least thought about the question, “If you could have a superpower, what would it be?” Some would say invisibility, teleportation or being able to fly, and some would say telepathy — specifically the power to read other people’s minds.

Though this choice may not seem as exciting as the others, having this ability would allow one to gain information on the thoughts and feelings of others anytime he or she desire to. Not only is this knowledge powerful, but the process used to attain this information is also efficient, making today’s forms of communication less necessary or even irrelevant.

But telepathy is just a superpower, and humans are not meant to be mind-readers. This makes communication crucial for humans as it is the only ways to understand and form relationships with others. The power of basic communication is common sense to most. What is not as obvious is the importance of a specific type of communication: Open communication.

Open communication requires that both, or multiple people, in a relationship no matter whether it is a working, personal or family relationship are clear, honest and willing to openly express their feelings when need be. Ideally, if both parties are open with each other in this way, little room is left for beating around the bush, passive aggressive behavior or bottling up one’s feelings. This is not to say that open communication leads to a perfect relationship, as all relationships undergo bumps in the road, but it will make for a more easy going and efficient one.

For example, when a conflict arises between people in a relationship, there are many paths of action they can take. Today, many might choose to keep their feelings to themselves, adopt a passive aggressive attitude or choose to ignore the other person entirely, also known as the “silent treatment.” While the person carrying out these behaviors might feel a sense of satisfaction or believe that his or her actions are justified, any behavior of the like is simply counterproductive.

Junior Jessica Cheng also feels that behaviors which include keeping emotions to oneself are not helpful.

“Bottling up your feelings won’t only hinder your effort to fix your problems, but will impede others’ efforts to help you as well,” Cheng said.

These behaviors do not solve the conflict at hand and can even result in further hostility between the people involved. More importantly, since this type of behavior usually leads to no communication between those involved in the conflict, both parties have no idea what the exact actions or emotions of the other party are, leaving this information up in the air for speculation. Neither side understands the big picture.

Instead, if those involved in the conflict took a different approach and simply expressed their emotions and explained their actions to each other, at the very least, all the information would be out in the open.

Nothing would be left to speculation, both parties would get a chance to get everything off their chests and both parties could fully understand both sides of the conflict. As mentioned before, humans are not mind readers, and cannot address issues or solve problems they are not aware of. This is why it is so crucial that both parties communicate openly with each other, as there is no way for hidden feelings or issues to be solved.

“When faced with a conflict, I believe that having a matter of fact conversation with the other person is the most efficient way to handle the situation,” Kumar said. “By communicating your frustration and being willing to have an equal conversation with both parties participating and sharing their opinions and emotions, everything is out in the open and a logical solution can be reached.”

Open communication is not only useful for dealing with conflicts but can be applied to relationships in daily life as well. In fact, if people are open about issues as they arise and express their concerns freely, small matters will not boil over time into larger issues or will not combine with other issues to become a huge and unnecessary conflict later down the road.

Additionally, open communication also helps both parties of a relationship become better listeners, as they learn to respect and acknowledge the viewpoints of others. Cheng believes that open communication requires reciprocating the act of listening and understanding the feelings of others.

Through listening, both parties of a relationship can learn to better empathize with each other, recognize the values of the other party and slowly understand what truly makes the other upset.

This can help both parties involved form a stronger, more knowledgeable bond with each other.

Open communication gives people the opportunity to learn how to care about and empathize with each other and how to express themselves. It gives people the chance to strengthen their bonds of love, friendship and trust with each other, something that is very special and unique. It may be a blessing that humans are not mind-readers.