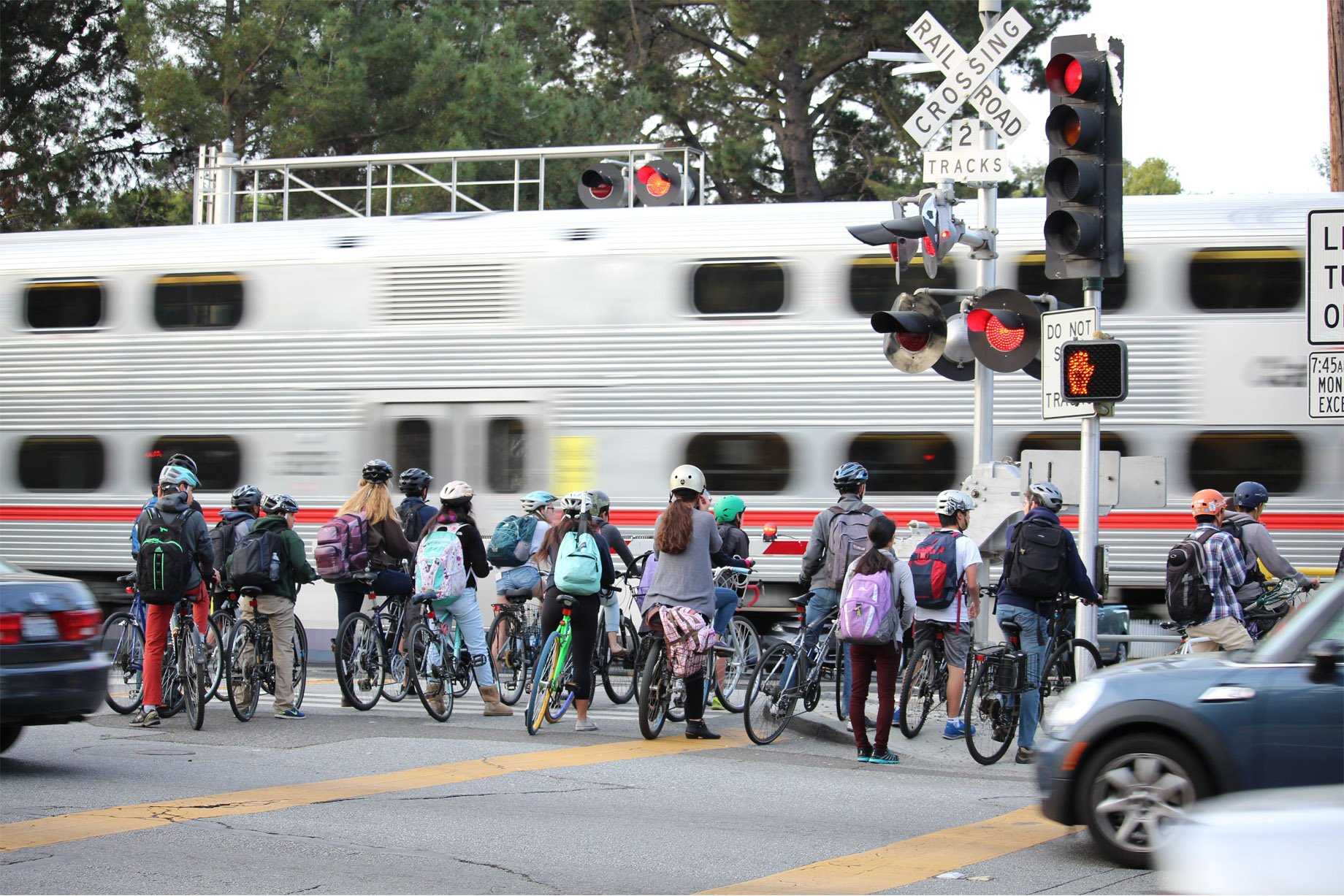 Students who bike to school illegally crowd at the Alma and Churchill intersection after a train triggers a red light for traffic.

Around 850 students bike to Palo Alto High School between 7:40 and 8:15 a.m. and most have to cross a high traffic intersection right before entering the school. This intersection is where Alma Street, Churchill Avenue, Caltrain and hundreds of drivers and bikers meet daily to form the potential for a disaster. Biking to school has become increasingly dangerous, and either traffic regulation or lane improvements need to be implemented to prevent bike related accidents from happening.

The number of bikers to school has steadily increased over past four years and so has the number of accidents. Before 2012, only one or two accidents were reported annually. Then in 2012 and 2013, bike accidents increased to four to five per year. This year there are more bikers than ever before, with over 40 percent of Paly’s population biking to school. Three sophomores have been in bike accidents and broken wrists, collarbones and forearms this year. None of them reported their accidents to the police, meaning that the actual number of student injuries is unknown.

The greatest risk of injury is at the Alma Street and Churchill Avenue intersection. The number of students piles up at the intersection as they wait for the light to turn green. Between the time of 8:05 a.m. and 8:10 a.m., the line of student bikers sometimes stretches 75 feet from the intersection.

When the light turns green students have a 20 second window to make it across the intersection. Unfortunately, the line is so long that the window closes before everyone makes it across. But instead of obeying traffic laws and stopping, students keep going, cutting off cross traffic and putting themselves directly in the way of cars moving at 35 miles per hour.

In these situations the bikers are at fault. They disobey traffic laws and put themselves in danger. If students keep doing what they have always done, then it is inevitable that the number of accidents will increase. A solution is to request the police officers that hide in the bushes on Churchill to ticket bikers more. Stricter enforcement of traffic laws may be the mental check needed to keep us from charging the light.

Once one crosses the intersection, there is still more danger. Cars will block the bike lane when asked to pull over by the police handing out tickets. This causes domino-like collisions, as 20 to 30 bikers suddenly screech to a halt. Finally the students have to turn right into the Paly parking lot. Unfortunately, many cars are trying to make the same turn and a bottle-necking effect results are cars and bikers disagree over who takes the turn first.

These dangers are a result of issues with the bike route. Past the intersection, the sidewalk should be sloped, allowing bikers to smoothly transition onto the sidewalk without being forced to suddenly stop or get hit by cars at the turn into the parking lot.

There is nothing more important in our lives than staying alive. In a bike versus car situation the bike always loses. There needs to be some change, either with the regulation of traffic, Caltrain or the student bikers to prevent biking from being more dangerous than ever.