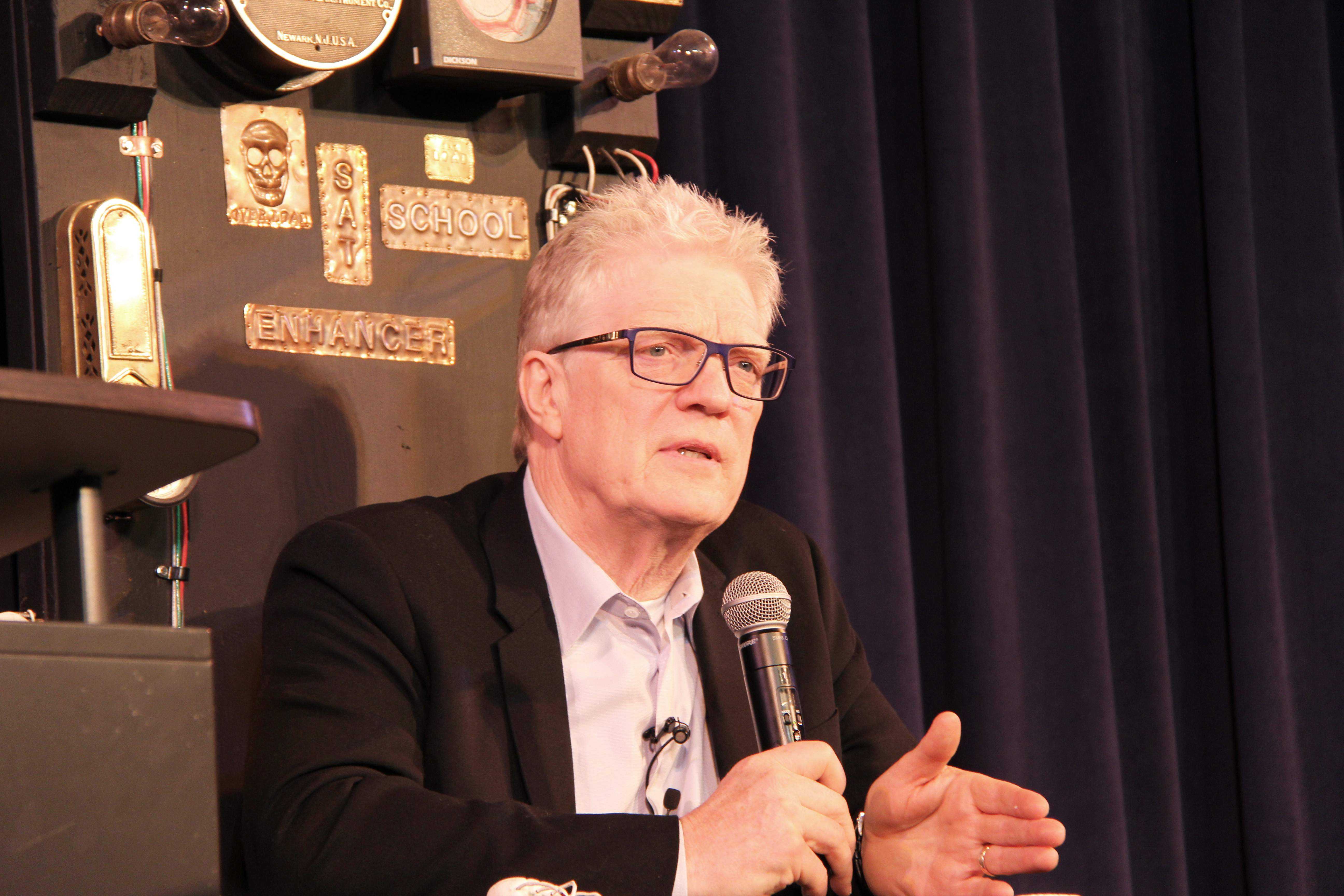 A bestselling author of “The Element,” Robinson, who also holds the esteemed distinction of giving the most viewed Technology, Education and Design (TED) talk of all time, spoke to an audience of 270 attendees in the MAC about what he sees as dangerous flaws in modern education and how schools should act in order to inspire meaningful change in the field.

Robinson has been involved in education for over 40 years, working with nonprofits throughout the world and with the British government, where his work included a plan for educational and economic development in Northern Ireland.
Central to Robinson’s presentation was his idea that modern education requires systemic change in order to appropriately serve today’s students. He targeted the institution of standardized testing as one of the most harmful to student creativity, and stated that the climate of education in the United States is overreliant on utilitarian testing practices.

“There are brilliant schools around, like this one, almost in spite of the dominant culture of testing, but they’re great in spite of it, not because of it,” Robinson said. “That’s partly what I’m arguing for, is to have an education system that’s differentiated and which takes into account individual talents and interests, rather than judging people by a single standard.”

Robinson detailed what he sees as a misuse of technology, namely the internet, by schools. Rather than individualizing learning, Robinson sees technology as being used to justify unrealistic expectations of students.

“We have a world now where we are expected to know everything. It’s seen as a social fault if you declare ignorance about something,” Robinson said. “It’s the presumption to know that has been the death of dialogue in education, and it’s happening all the time in schools that people are often expected to know things that are, frankly, unknowable.”

In addition, Robinson explained that he hopes to see greater individualization in schools, likening the transition to the move from industrial agriculture to organic farming.

He also expressed a need for schools to offer a morediverse curriculum, without undue emphasis on either technical education or the arts, stating that the current system only accommodates certain types of learners.

“I’m not saying that education is a total disaster and it’s badly served everybody; on the contrary, there are loads of people who have done quite brilliantly by this current system. But it’s tailored to certain sorts of people.” Robinson said. “So what I’m marketing for is to change the climate so all schools can be good, because of it, not in spite of it.”

The event also focused on the promotion of Robinson’s upcoming book, titled “Creative Schools: The Grassroots Revolution That’s Transforming Education.” The book, Robinson’s third, focuses on what Robinson describes as an outdated educational system, more suited for the industrial revolution than the modern world. In response, Robinson outlines his recommendation for a flexible, creative and organic system of education, on which can prepare students for an uncertain future.

Humorist and writer Emily Levine also spoke at the event, promoting the release of her film, “Emily @ The Edge,” which addresses issues in American society using scientific concepts. Robinson’s book is set to be released on May 13, but is available for pre-order on Amazon.