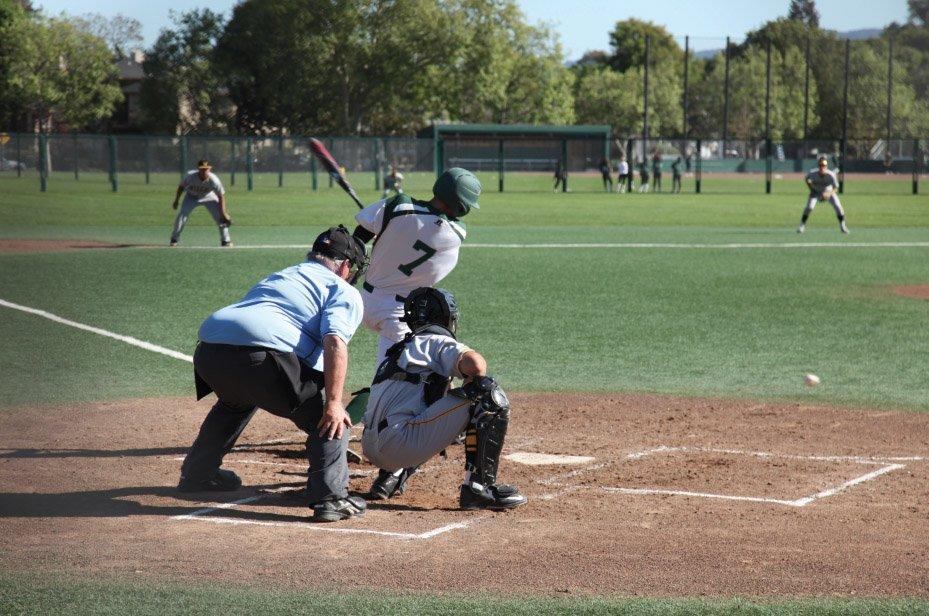 Junior Riley Schoeben swings his bat and hits a straight line drive onto the right. The Vikings would lose to Wilcox at home 6-3 but take revenge in the second game 4-1.

Baseball struggles as season comes to a close

The boys made a few errors during both games, but remain confident about their abilities.

“We should have won that game,” sophomore Ryan Chang said. “We didn’t play good enough defense, but we can definitely beat Los Gatos.”

Los Gatos is one of the best teams in the De Anza League, with nine wins and one loss. The boys struggled with the intimidation that comes with playing teams like Los Gatos.

“We get too tense playing baseball,” Chang said. “Our coach says we need to play relaxed, and it only matters how we treat the ball. Sometimes we get it in our heads that this team is too good and we just psyche ourselves out.”

After the Los Gatos games, the team prepared for its matchup against Milpitas High School, one of the last games of the season.

“Our new coach Fukahara is trying to teach us this thing called Kaizen,” Chang said. “Basically, if you don’t do well a certain day, you can always improve the next one.”

This mentality has enabled the boys to stay positive throughout the year, and has allowed them to come back from losses.

Additionally, a strong senior presence and sense of team unity draws the players together and encourages quality play in both games and practice.

“We stopped playing so relaxed and started to make some mistakes,” junior pitcher Justin Hull said. “This has kind of carried on throughout league play and until last week. But we have had some really great practices and are playing well now.”

The Vikings came out strong in their first game against Milpitas with a final score of 7-4. However, the second game was much closer. After extra innings, the final score versus Milpitas ended with a 7-7 tie.

“The second pitcher we faced for Milpitas was their ace, so it took a while to score runs,” Chang said. “Aron Ecoff was incredible pitching for us, and kept us in the game.”

The boys most recent game against Menlo Atherton High School ended with a 7-4 loss. The 11-inning game against Milpitas left the boys fatigued. Consequently, the boys began to make mistakes that led to their downfall.

“Our hitters focused more on hitting home runs than base hits,” Chang said. “But ultimately we lost because of our defense. Six errors will not win us many games.”

The end of the league season is fast approaching for the boys, and junior Owen Plambeck is optimistic about the results in the coming games.

“First and foremost, we want to get into our league playoffs and hopefully win those,” Plambeck said. “After that, our main goal is to get into [Central Coast Section (CCS)] and make a deep run into CCS playoffs.”

Chang also has high hopes for the boys’ chances in CCS, but acknowledged that they needed to focus on the league games first. However, he has faith that the seniors’ experience  will lead them to victory.

“I feel like we have a chance,” Chang said. “Our seniors will lead the way because they have been here for four straight years. But ultimately, it comes down to all of us playing great baseball.”

Over the season, the baseball team’s success has come in waves. Senior Ellis O’Brien attributes their unstable record — 12 wins, 10 losses and one tie — to a weak defense and injuries.

“The team got off to a hot start winning eight of our first nine games,” O’Brien said. “But recently, we lost four out of our last five. Unfortunately, I am injured and have not been playing.”

As the baseball season draws to a close, the boys’ perspective on whether or not the rest of the season will go well varies. However, although they have made a few mistakes, most players feel that the team has a lot of young talent that will translate to a more successful team in the years to come.

“In general, we did a lot better than we did last year,” Chang said. “We were a lot more aggressive and kept our head in the game. We have some freshman and four sophomores and they have really been stepping up for us.”