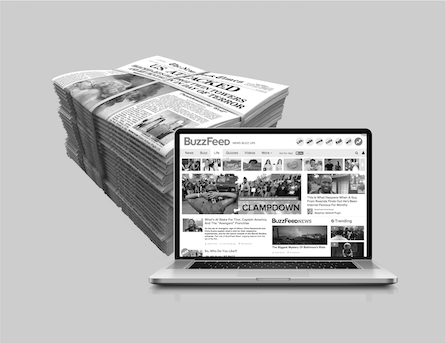 The website Buzzfeed has recently gained popularity for its quizzes and tabloid-style news, to the detriment of journalism.

“The Media Company for the Social Age.”

So reads the slogan of Buzzfeed, the nearly ubiquitous social news and entertainment company that delivers “the most shareable breaking news, original reporting, entertainment, and video across the social web to its global audience of more than 200 [million monthly unique visitors],” according to the company’s website.

Buzzfeed was founded in 2006 by internet entrepreneur Jonah Peretti and has since grown into an internet juggernaut, drawing in about 78 million unique visitors every month, far ahead of the New York Times’ estimated 57 million. In 2013, Peretti announced that the company had become profitable a little over six years after its inception — no small feat for a startup.

The content that draws in these many throngs of visitors is presented in the form of popular news articles, slapstick quizzes and listicles — the website’s signature list-articles. Such list-articles deliver comedic narratives, typically in the form of numeric lists. Aside from various news stories and community opinion pieces, much of the content that populates the website consists of lighthearted and entertainment-oriented content.
Innocuous, right? There must be no harm in a website attempting to cover all the bases by consolidating both news and entertainment into a single, all-encompassing website.

Wrong. There is a distinction between legitimate publications and tabloids for a reason — news and entertainment simply should not mix. Light-hearted and entertainment-driven substance draws in a larger audience — as is demonstrated by the wide popularity of tabloids.

The motif of tabloid popularity has been more evident in the past few years than any before — the journalism community is witnessing a drastic drop in demand for news pertaining to government and foreign affairs in favor of celebrity and entertainment news. Buzzfeed preys on this mentality and inherently draws in a wider audience as compared to legitimate news publications such as the New York Times.

Buzzfeed’s widespread popularity made it ever the more alarming in 2011, when Ben Smith was hired as Editor-in-Chief in an attempt to lead the company’s foray into legitimate journalism and reportage.

As Buzzfeed expands and starts to provide news, more and more people who previously visited the website for entertainment gravitate towards it as a news source. With multipurpose staff writers trained to maintain a significant ratio of listicles to regular articles, the quality of journalism found at Buzzfeed pales horribly in comparison to other established publications.

A typical Buzzfeed news story will consist of a few sentences being split by multiple unnecessary pictures or other embedded media. Rarely do these news stories surpass even half the length of a regular news story published by a reputable publication. The unfortunate reality is that a website that categorizes its articles by “LOL,” “win,” “omg,” “cute,” “fail” and “wtf” is attempting — and just about short of succeeding — to usurp the journalistic roles of esteemed publications.

In short, Buzzfeed perpetuates the gradual degradation of journalism that has come about with the pre-eminence of tabloids and entertainment news.
As mentioned before, Buzzfeed raised venture capital quickly after it was founded and achieved profitability early on. But, without any banner advertisements on its website, how does Buzzfeed generate revenue?

Rather than having evident advertisements on its website, Buzzfeed instead uses a method called native advertising. Native advertising is a type of advertis that integrates promotion of a product or a company into the website’s traditional medium, making it indistinguishable from the content. This is the behind-the-scenes of stories along the lines of “18 Things Every Starbucks Addict Needs To Have At Their Wedding.”

Coupled with Buzzfeed’s yearn to expand into the realm of news, native advertising evokes a deeper concern than low-quality news. Native advertising makes it so that there is an inherent bias in the website’s news towards whoever Buzzfeed is sponsored by. Here, ethics are completely abandoned. Publications are often criticized for political bias, but one would not expect or hope to see product placement trickling its way into a news article.

As if any of the aforementioned injustices were not enough, the vast majority of content on Buzzfeed is sourced improperly, if not downright stolen. Full articles have been plagiarized from other websites and published on Buzzfeed, where they achieved heightened popularity. When images or other forms of media are sourced on Buzzfeed, it is in the form of a small, light grey colored link directly below the picture. More often than not, Buzzfeed authors are too lazy to seek out the real source and instead link the direct resource to said media. This method of sourcing is wildly incorrect and poses no benefit to the actual creator of the content.

So, borderline tabloidism, unethical advertising and plagiarism. Not a great track record. Buzzfeed’s “journalism” takes a wide berth from the original goal of modern journalism — to maintain a healthy society by informing the public. Not only is much of the Buzzfeed website not dedicated to informing the public, but when it makes an attempt to do so, it does so inadequately. Buzzfeed is the dwelling place for subpar articles that very well may be interspersed with product placement and plagiarism. The website’s established light-heartedness simply does not mesh with the very consequential practice of journalism, and it should not make attempts at legitimate journalism any longer.