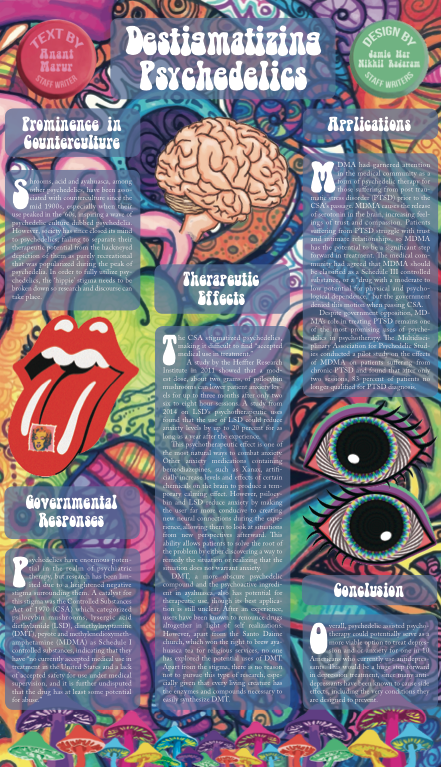 Shrooms, acid and ayahuasca, among other psychedelics, have been associated with counterculture since the mid 1900s, especially when their use peaked in the ‘60s, inspiring a wave of psychedelic culture dubbed psychedelia. However, society has since closed its mind to psychedelics, failing to separate their therapeutic potential from the hackneyed depiction of them as purely recreational that was popularized during the peak of psychedelia. In order to fully utilize psychedelics, the ‘hippie’ stigma needs to be broken down so research and discourse can take place.

Psychedelics have enormous potential in the realm of psychiatric therapy, but research has been limited due to a heightened negative stigma surrounding them. A catalyst for this stigma was the Controlled Substances Act of 1970 (CSA) which categorized psilocybin mushrooms, lysergic acid diethylamide (LSD), dimethyltryptamine (DMT), peyote and methylenedioxymethamphetamine (MDMA) as Schedule I controlled substances, indicating that they have “no currently accepted medical use in treatment in the United States and a lack of accepted safety for use under medical supervision, and it is further undisputed that the drug has at least some potential for abuse.”

The CSA stigmatized psychedelics, making it difficult to find “accepted medical use in treatment.”

A study by the Heffter Research Institute in 2011 showed that a modest dose, about two grams, of psilocybin mushrooms can lower patient anxiety levels for up to three months after only two six to eight hour sessions. A study from 2014 on LSD’s psychotherapeutic uses found that the use of LSD could reduce anxiety levels by up to 20 percent for as long as a year after the experience.

This psychotherapeutic effect is one of the most natural ways to combat anxiety. Other anxiety medications containing benzodiazepines, such as Xanax, artificially increase levels and effects of certain chemicals on the brain to produce a temporary calming effect. However, psilocybin and LSD reduce anxiety by making the user far more conducive to creating new neural connections during the experience, allowing them to look at situations from new perspectives afterward. This ability allows patients to solve the root of the problem by either discovering a way to remedy the situation or realizing that the situation does not warrant anxiety.

DMT, a more obscure psychedelic compound and the psychoactive ingredient in ayahuasca, also has potential for therapeutic use, though its best application is still unclear. After an experience, users have been known to renounce drugs altogether in light of self realizations. However, apart from the Santo Daime church, which won the right to brew ayahuasca tea for religious services, no one has explored the potential uses of DMT. Apart from the stigma, there is no reason not to pursue this type of research, especially given that every living creature has the enzymes and compounds necessary to easily synthesize DMT.

MDMA had garnered attention in the medical community as a form of psychedelic therapy for those suffering from post traumatic stress disorder (PTSD) prior to the CSA’s passage. MDMA causes the release of serotonin in the brain, increasing feelings of trust and compassion. Patients suffering from PTSD struggle with trust and intimate relationships, so MDMA has the potential to be a significant step forward in treatment. The medical community had agreed that MDMA should be classified as a Schedule III controlled substance, or a “drug with a moderate to low potential for physical and psychological dependence,” but the government denied this motion when passing CSA.

Despite government opposition, MDMA’s role in treating PTSD remains one of the most promising uses of psychedelics in psychotherapy. The Multidisciplinary Association for Psychedelic Studies conducted a pilot study on the effects of MDMA on patients suffering from chronic PTSD and found that after only two sessions, 83 percent of patients no longer qualified for PTSD diagnosis.

Overall, psychedelic assisted psychotherapy could potentially serve as a more viable option to treat depression and or anxiety for one in 10 Americans who currently use antidepressants. This would be a huge step forward in depression treatment, since many antidepressants have been known to cause side effects, including the very conditions they are designed to prevent.