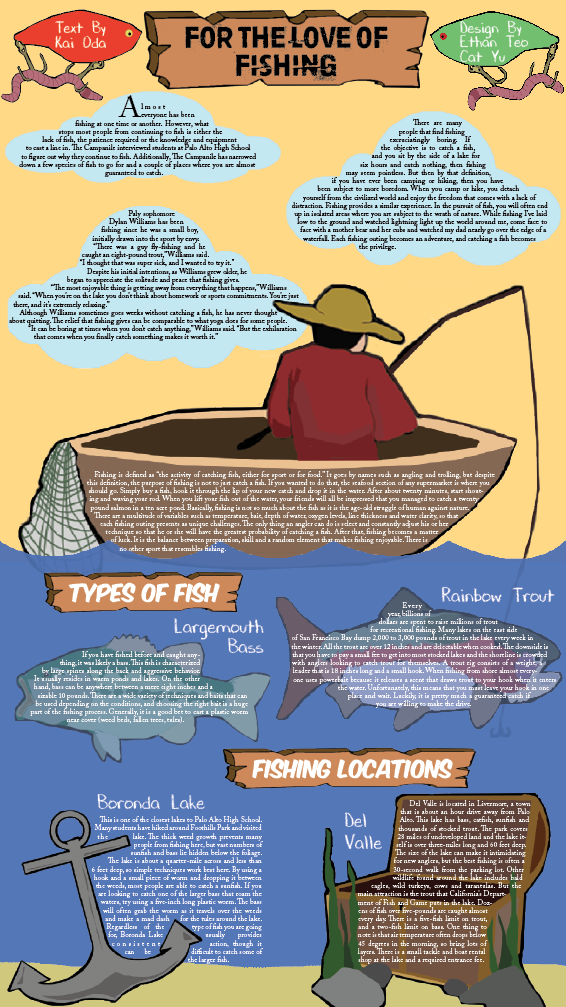 For the love of fishing

Almost everyone has been fishing at one time or another. However, what stops most people from continuing to fish is either the lack of fish, the patience required or the knowledge and equipment to cast a line in. The Campanile interviewed students at Palo Alto High School to figure out why they continue to fish. Additionally, The Campanile has narrowed down a few species of fish to go for and a couple of places where you are almost guaranteed to catch.

There are many people that find fishing excruciatingly boring. If the objective is to catch a fish, and you sit by the side of a lake for six hours and catch nothing, then fishing may seem pointless. But then by that definition, if you have ever been camping or hiking, then you have been subject to more boredom. When you camp or hike, you detach yourself from the civilized world and enjoy the freedom that comes with a lack of distraction. Fishing provides a similar experience. In the pursuit of fish, you will often end up in isolated areas where you are subject to the wrath of nature. While fishing I’ve laid low to the ground and watched lightning light up the world around me, come face to face with a mother bear and her cubs and watched my dad nearly go over the edge of a waterfall. Each fishing outing becomes an adventure, and catching a fish becomes the privilege.

Paly sophomore Dylan Williams has been fishing since he was a small boy, initially drawn into the sport by envy.

“There was a guy fly-fishing and he caught an eight-pound trout,” Williams said. “I thought that was super sick, and I wanted to try it.”

Despite his initial intentions, as Williams grew older, he began to appreciate the solitude and peace that fishing gives.

“The most enjoyable thing is getting away from everything that happens,” Williams said. “When you’re on the lake you don’t think about homework or sports commitments. You’re just there, and it’s extremely relaxing.”

Although Williams sometimes goes weeks without catching a fish, he has never thought about quitting. The relief that fishing gives can be comparable to what yoga does for some people.

“It can be boring at times when you don’t catch anything,” Williams said. “But the exhilaration that comes when you finally catch something makes it worth it.”

Fishing is defined as “the activity of catching fish, either for sport or for food.” It goes by names such as angling and trolling, but despite this definition, the purpose of fishing is not to just catch a fish. If you wanted to do that, the seafood section of any supermarket is where you should go. Simply buy a fish, hook it through the lip of your new catch and drop it in the water. After about twenty minutes, start shouting and waving your rod. When you lift your fish out of the water, your friends will all be impressed that you managed to catch a twenty pound salmon in a ten acre pond. Basically, fishing is not so much about the fish as it is the age-old struggle of human against nature. There are a multitude of variables such as temperature, bait, depth of water, oxygen levels, line thickness and water clarity, so that each fishing outing presents as unique challenges. The only thing an angler can do is select and constantly adjust his or her technique so that he or she will have the greatest probability of catching a fish. After that, fishing becomes a matter of luck. It is the balance between preparation, skill and a random element that makes fishing enjoyable. There is no other sport that resembles fishing.

If you have fished before and caught anything, it was likely a bass. This fish is characterized by large spines along the back and aggressive behavior. It usually resides in warm ponds and lakes. On the other hand, bass can be anywhere between a mere eight inches and a sizable 10 pounds. There are a wide variety of techniques and baits that can be used depending on the conditions, and choosing the right bait is a huge part of the fishing process. Generally, it is a good bet to cast a plastic worm near cover (weed beds, fallen trees, tules).

Every year, billions of dollars are spent to raise millions of trout for recreational fishing. Many lakes on the east side of San Francisco Bay dump 2,000 to 3,000 pounds of trout in the lake every week in the winter. All the trout are over 12 inches and are delectable when cooked. The downside is that you have to pay a small fee to get into most stocked lakes and the shoreline is crowded with anglers looking to catch trout for themselves. A trout rig consists of a weight, a leader that is 18 inches long and a small hook. When fishing from shore almost everyone uses powerbait because it releases a scent that draws trout to your hook when it enters the water. Unfortunately, this means that you must leave your hook in one place and wait. Luckily, it is pretty much a guaranteed catch if you are willing to make the drive.

This is one of the closest lakes to Palo Alto High School. Many students have hiked around Foothills Park and visited the lake. The thick weed growth prevents many people from fishing here, but vast numbers of sunfish and bass lie hidden below the foliage. The lake is about a quarter-mile across and less than 6 feet deep, so simple techniques work best here. By using a hook and a small piece of worm and dropping it between the weeds, most people are able to catch a sunfish. If you are looking to catch one of the larger bass that roam the waters, try using a five-inch long plastic worm. The bass will often grab the worm as it travels over the weeds and make a mad dash for the tules around the lake. Regardless of the type of fish you are going for, Boronda Lake usually provides consistent action, though it can be difficult to catch some of the larger fish.

Del Valle is located in Livermore, a town that is about an hour drive away from Palo Alto. This lake has bass, catfish, sunfish and thousands of stocked trout. The park covers 28 miles of undeveloped land and the lake itself is over three-miles long and 60 feet deep. The size of the lake can make it intimidating for new anglers, but the best fishing is often a 30-second walk from the parking lot. Other wildlife found around the lake includes bald eagles, wild turkeys, cows and tarantulas. But the main attraction is the trout that California’s Department of Fish and Game puts in the lake. Dozens of fish over five-pounds are caught almost every day. There is a five-fish limit on trout, and a two-fish limit on bass. One thing to note is that air temperature often drops below 45 degrees in the morning, so bring lots of layers. There is a small tackle and boat rental shop at the lake and a required entrance fee.